Battle of Magnesia 190 BC

The subject this time was another classic Romans v Phalanx match up with Scipio v Antiochus. I have to say up front that I was slightly less prepared for this than I expected to be. My first intention was to do the Battle of Tunis in 310 BC between Carthage and Syracuse. It's got chariots in it, and I thought my Assyrians would pass muster in a pinch. Having set the game up I realised there were a number of structural issues that might mean it was less interesting than it might be. Like it would be a head on smash up with no room to manoeuvre at all.

No matter, I realised I had Magnesia that I'd never done, and Thursday off work to sort it all out for a Friday pm game. Then it turned out I did have to work Thursday, so I did all the game prep on Friday morning, so not as much thought went into it as usual. This time I had to rely entirely on "Lost Battles", without a chance to check anything in the sources myself.

I was joined by three of my regulars for the game, which enabled me to have one player for Scipio, one for Antiochus and one for Eumenes, Scipio's ally who excelled on his right flank. 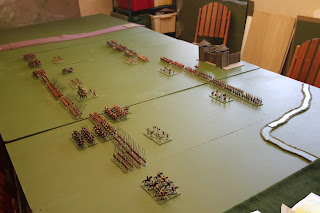 This is the set up. Seleucids to the left, Romans to the right. Only the Roman camp is on the table, and it has two units in it. Otherwise the layout is as per Sabin & "Lost Battles". 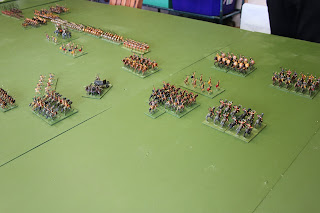 The Romans went first, and I stood in for Eumenes whilst we waited for Phil. Without consulting Scipio I launched an immediate attack, because that's what Eumenes did. In fact it looked like the best choice. Smash in the Seleucid left with our superior cavalry and roll the rest up. The above picture is from behind our position, and the first indication things were going to go pear shaped came when I was unable to either hit the scythed chariots with any archery, nor was I able to get the light troops in its way to prevent it mashing up something useful. 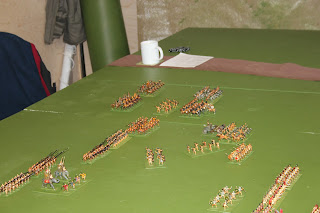 The scythed chariot made contact with my cavalry, and the failure of the archers to do anything meant their flank was up in the air, and open to the Seleucid light troops for no net gain. 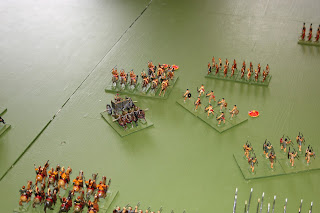 The scythed chariot was removed after one round of combat, as per the rules, but not until it had done some considerable damage to one of my cavalry units. Here is the first indication that the scenario might have problems. Loss of scythed chariots in the basic game is a nuisance as they count as a full unit and are very unlikely to take a unit with them. In a larger game where their side has more units it is much less of a problem. I hadn't really addressed the disparity in numbers as well as I could, although I thought having two commanders to one would make more difference than it did. You'll also notice that I reduced the numbers of massed Seleucid archers as they would really chew up the Romans before contact as there's no adjustment to shooting effect for levy troops. 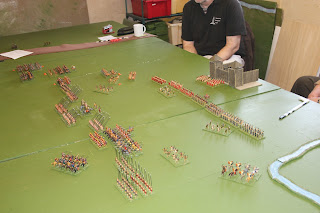 Phil has now arrived (only a couple of moves in, so I haven't had the chance to ruin his position too much). Will has marched out his camp guards, and otherwise held back with the rest of the army. Chris A as Antiochus has gone forward with everything except for one unit of cataphracts, which he has decided will be needed on his left flank. I didn't think much about Will's reluctance as Scipio to advance, but in the end I think it hurt the Romans as they were too disconnected from the cavalry flank when they needed help. 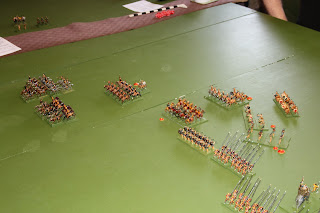 Eumenes' flank is turning into a great churning cavalry melee, and Chris has done well to support his horse with infantry. Phil also did him a massive favour be proving incapable of rolling anything higher than a 3 in both combats and for saving rolls. His elite Companion cavalry was being shoved in a mincer by some scruffy levy types. 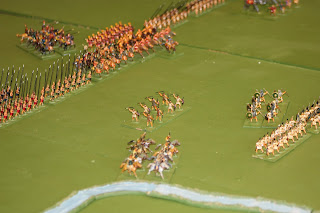 On the Roman left the Seleucids tried to sneak their light cavalry past the end of the line. It was pointed out to me that they should have been horse archers, not javelins.

As I said, bit short on the research time. 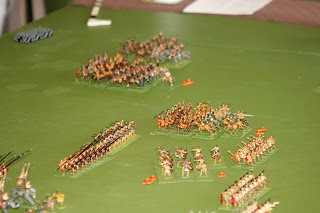 The cavalry fight over on the right wasn't going either as well or as quickly as the Romans expected and needed. 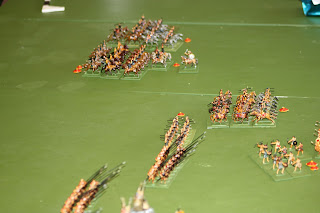 And rapidly went from bad to worse as the Roman/Eumenid cavalry sort of melted away. 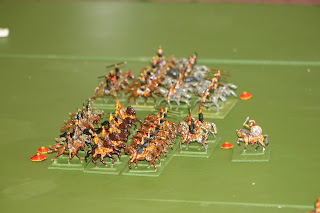 This is just a close up of the cavalry melee and adds nothing to the narrative. 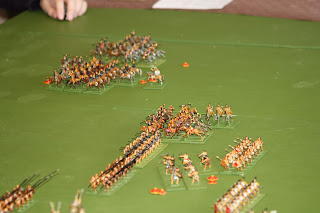 Those levy cataphracts are now just a base away from making a breakthrough, and there's barely a scratch on them. Ooo-er. The base turned to its side means there's a morale check to be made. 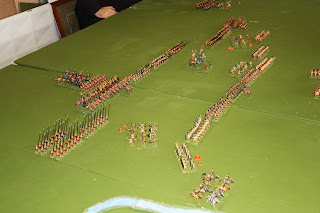 Elsewhere the end Legion unit took some javelins as the cavalry galloped past on their way to loot the camp. In the centre the velites were inflicting some damage on the elephant unit, whilst the phalanx ground slowly forwards. 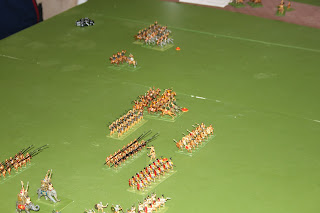 A couple of lucky throws and Eumenes and his Companions (near the top of the picture) have finally won their encounter. Shame they are (a) down to one base and (b) a long way away from the rest of the battle. 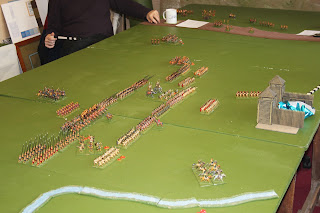 The light cavalry can now see the shiny blue plunder in the camp. Elsewhere the elephants are chomping up the velites. At the top of the picture Eumenes rushes his Companions over to help out in the final cavalry fight. Probably the right decision, but it pulled them even further away from the scene of the action. 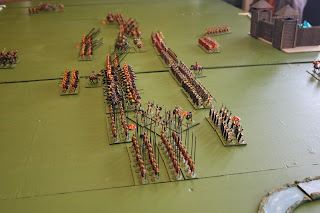 On the left and centre the lines of infantry close steadily. In the middle the elephants prove particularly difficult to kill, and are making a major mess of the Roman front line. 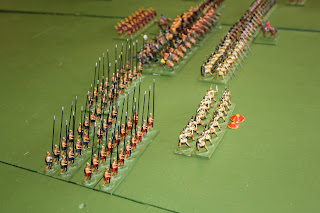 There's a single legion unit facing off three units of phalangites. They might need a bit of luck. 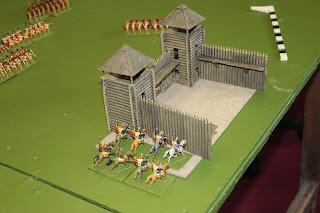 The light horse attack the Roman camp. It all seems to be very quiet in there. 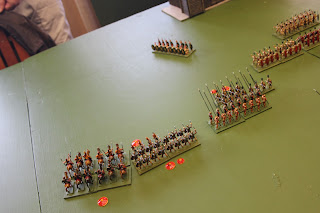 On the Seleucid left centre they have swept all before them and are now looking to roll up the Roman line. The Romans really need something to go their way. 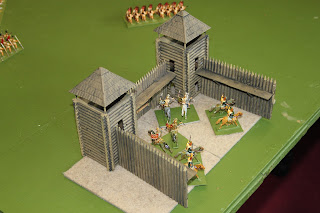 The Light Cavalry find the camp empty (NB The camp is part of the Zvezda Baltic Medieval Fortress. It isn't much like a Roman marching camp, but I like it). 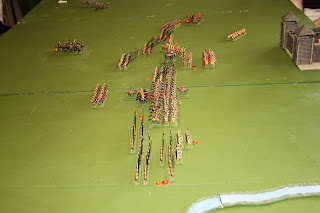 The lines finally close. There's a hint of a chance here as you would expect formed Legions to fight off Heavy Cavalry if their flanks are secure. Plus Scipio's there, adding his support. 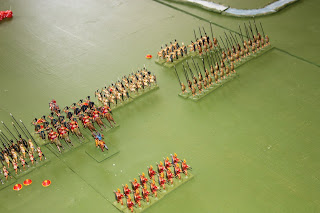 One Legion finishes off its mounted foes in fairly short order. Has the tide turned? The Legion out on the Roman left has nearly destroyed one Phalanx already. 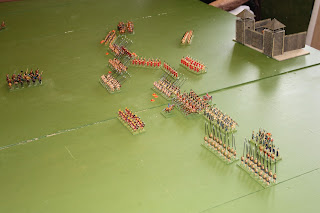 The Romans finally kill the elephant through the application of overwhelming force. Reserves are being rushed over to shore up the right flank. 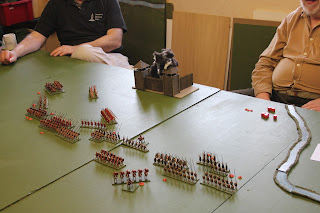 As the camp goes up in smoke to the cries of "Where are you sleeping tonight, Scipio?", Antiochus pulls out his central cavalry unit, and sends in some allied infantry to see if they can do a better job on the Legions. 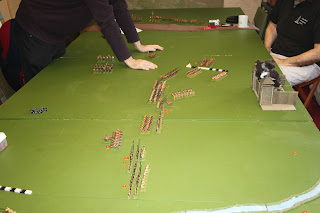 The Roman right flank is looking even more dodgy despite the reinforcements sent across to help out. The cavalry fight out on the extreme right has just taken too long to resolve. 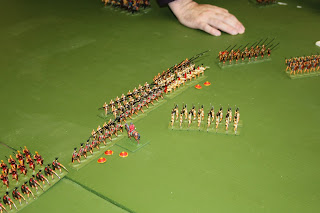 In the centre the Romans are hanging on, although most units are now at half strength. If Scipio can just finish off that final base in front of him, he can break through and create an internal flank. 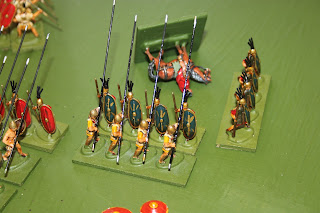 Or, of course, it could all go to mush and he could die in the combat. Which he did. 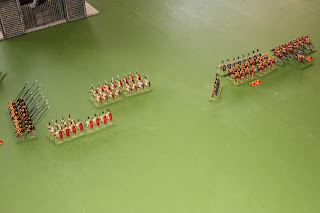 On their right centre the Romans finally achieve a breakthrough, but too late, as the Seleucids have turned their flank. 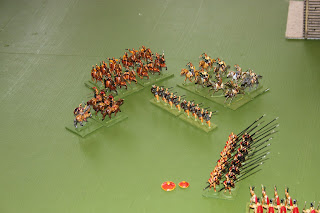 The Reserves are surrounded and crushed, despite Eumenes' late intervention. 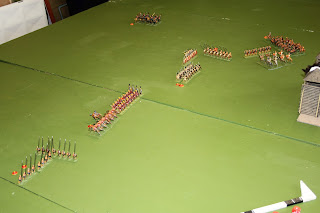 A couple more combat rolls, and the Romans reach their army break point. It was closer than it looked. There are quite a few Seleucid units that have been badly roughed up, but crucially they're still in the game. The Romans, alas, may have lost fewer bases overall, but they've lost more units.

The Roman march to the East has been halted.

A satisfactory game that filled an afternoon for 3-4 players (I helped push the Seleucids about under Chris' direction and shared the dice rolling duties), taking about 3  1/2 hours. Not bad for the amount of kit on the table and the less than breakneck speed it was played at.

The outcome was fairly close, as I said, but I'm not sure how much like Magnesia it looked. If I were to play it again I'd need to reconsider a number of things to even things up.
Posted by Trebian at 19:41