When I was at University I worked on four different wargames projects / armies. One I’ve already written about in the last blog. Of the remaining three only one of them is still with me as a viable project and two of them are cautionary takes I look back at from time to time.

The other one that is still with me is the Indian Mutiny. I’ve blogged previously about the set of rules I eventually wrote (“Sepoy”) so some of what goes below has been aired before, but there were a number of false steps before they emerged.

The main inspiration for getting into the period was Flashman. The Indian Mutiny novel, “Flashman in the Great Game”, is one of the best in the series, if not the best. Actually, yes, it is the best. It has everything you’d want from a Flashman novel with a gripping and exciting background.

I’ve been inspired by several Flashman novels but only this one got me to an army and a game design. “Flashman’s Lady” made we want to do the Borneo pirate campaigns of Rajah Brook, but I couldn’t work out how to make it work, so it never came to anything.

Anyway, back to FITGG. It was clear from the book that the campaign had great feats of arms and derring-do. It wasn’t a traditional colonial game as the mutineers were European trained to a large extent, and armed with comparatively modern weapons. Battles are fought top a large extent like European battles, but under the sun. It has a range of fascinating Victorian characters, - Henry Havelock is a man who has been massively overlooked in modern times, but to his contemporaries he was a real hero. What’s more, after the mess of the Crimea it is a relief to find British Army commanders who seem to know what they are doing. Plus we have the Enfield Rifle that changed the battlefield dynamic. 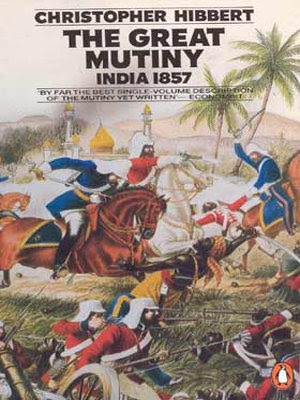 After reading the novel I went off and read Christopher Hibbert’s book “The Great Mutiny” which continued to drive my interest. The novel wasn’t a gross exaggeration, nor did it miss any major items. The bibliography then gave me access to Michael Edwardes series of books on the Mutiny which I found in the various great libraries of my university city.

And to cap it off Minifigs had an Indian Mutiny range, so figures were out there. The other consideration was that the armies were so small that at a scale of 1:50 all of Havelock’s army for the Lucknow campaign was completely affordable and would fit in a small box.

The truth is from then I struggled to produce a viable game. The units were so small that conventional rules wouldn’t work for them and the problem was also what to do with the Mutineer armies. I toyed with a variation of Pony Wars, attracted by the automatic movement system for the (Red) Indians. That failed on several levels. Next up came a version of Science v Pluck, which made it to Knuston for a CoW session. It had a mixed reception.

Edwardes’ book on the Siege of Delhi gave me a lot of ideas, as did his book on Lucknow (“Season in Hell”) which had some terrific contemporary London Illustrated News style etchings in it. By this time I was leaving university, IIRC, and realised that my small armies just wouldn’t work, so I boosted the unit sizes to my current levels. I’m not sure what sequence the games came but I did a couple of successful siege games. One was set in Lucknow and was based around the individual redoubts in the defences and was a sort of group role playing game. I ran it at CoW and it went well for a session, but taking it any further was a challenge.

Next I did a figure game based on British and loyalist forces fighting their way into Delhi to break the siege. This was a gridded game which had a movement system that created a unique maze type effect for each game. I built a lot of buildings for this game and they were moved around the board as the British blundered into various cul-de-sacs as the mutineers fired down on them from roof tops. I ran the game at CoW and then at Triples (or the other way round, probably, as Triples was then in March and CoW in July). I think I got a second or third place in best participation game at Triples.
I liked that game. Wonder if I still have the rules.

And then “File Leader” came along and so we get the story in this blog.