One of the features of the Pacific War 1879-84 is the regular bloody assaults on troops defending trenches, walls and redoubts.

I have quite a few walls and so on, but I don't have anything that looks like the type of walls in the contemporary illustrations. They seem to be made from stacking rocks on top of each other and then using some form of adobe construction. Plus all my walls are clearly European in style. 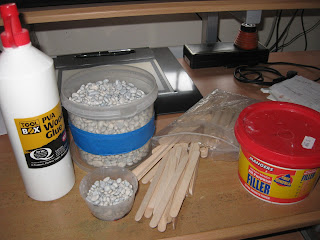 Here's my assembly of building products. I had to hand sort the gravel as some bits were too large, hence the small specimen pot in front. The cheap PVA was a problem as it was a bit runny. I would have used hot melt, but I'm running out of glue sticks and all the local cheap suppliers seem to be out of stock.

The sticks are 4 1/2 inches long. This turned out to be okay. Two sticks together cover three 3" squares, and I can cut some down. The diagonal on a 3" square is also about 4 1/4" so they just about fit there too. 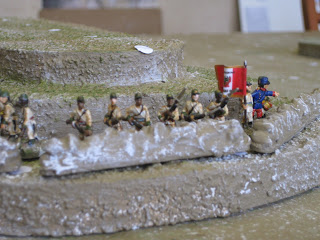 Here are some brave Peruvians hiding behind a new wall. I couldn't make them as tall as I'd like as the kneeling infantry couldn't see over them, and those with rifles held at the port couldn't stand up to them. 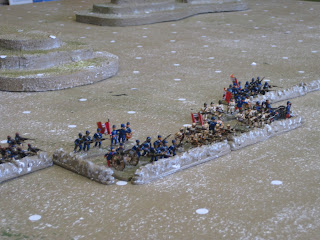 I've made about 6 full lengths and a couple of 3" sections so far, just to test out the concept. 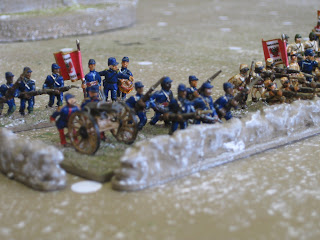 I can also just about squeeze a gun and a battalion behind them as well. 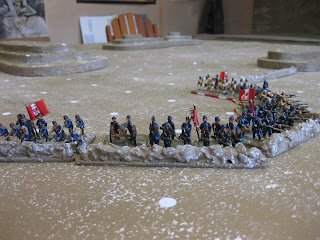 The diagonals will help me make more redoubt like looking shapes, although this is a BIG redoubt, given the 250 yards to 1 square scale. 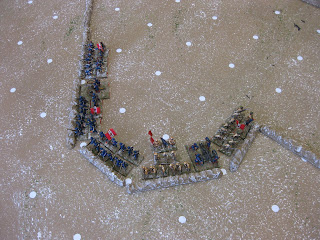 There's a slight issue with balancing them on the hills , depending on where the dots are placed, as I may end up with them hanging in the air a bit, but overall they work okay and weren't that time consuming, difficult or expensive to make.