Another play test. Sort of.

I sometimes wonder if Phil Barker is any good at DBA. I mean he wrote the rules, so he must know how they work and what you're supposed to do, so I suppose he must be. I've known him now for over 30 years and never seen him play it, so I'm just guessing.

I only mention it as I'm not sure if I'm any good at the rules I write. I mostly umpire people playing them rather than play myself and often when I do play them and try to do what you're supposed to do they don't quite work out for me.

I also wonder if he remembers all the rules he's written, too. Probably only the current ones. I can't remember them when I'm writing them. Chris A is good at reminding me I've forgotten something I've written.

Anyway, I've been away for a while, as referenced in the previous blog, and I hadn't played the Peru/Chile rules for a while before that either. Luckily I was off work Thursday, and Phil as free, so we squeezed a game in during the afternoon.

I wanted to get through as many moves as possible and also really try out the close assault rules. I therefore set up a one division v one division game and took the Chileans to attack with.

I also discovered some settings on my camera that enabled me to increase the depth of field in the pictures (ie get more stuff in focus) so I tried that out too. Alas the lighting in Shedquarters was a bit odd and I couldn't get as bright a set of pictures as I wanted. 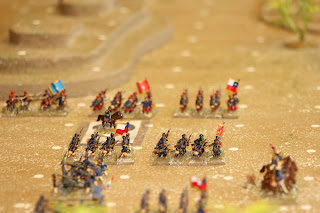 Here's a shot of the advancing Chilean forces. This is one of my pre-game shots when I was fiddling about with the depth of field. 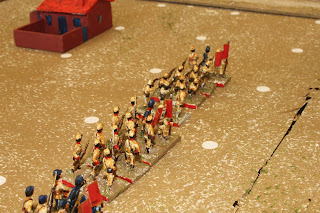 This picture shows I might have got it right. Both the head and the tail of the column are in focus, which I normally can't do. Anyway, now on with the game. 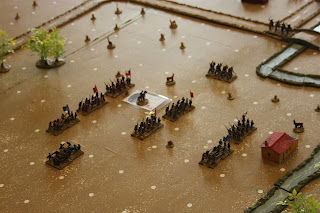 These are my Chileans advancing rapidly towards the bridge and road the Peruvians are defending. My aim here was to close the distance and close assault as quickly as I could to test the close combat rules. 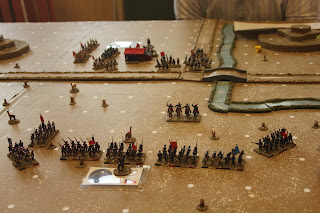 Phil countered by charging my cavalry screen. I reacted by forming a double infantry line to enable me to shoot them off if my cavalry shouldn't survive. 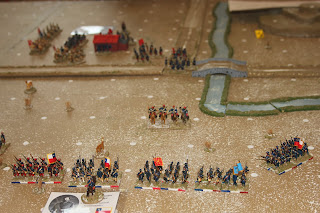 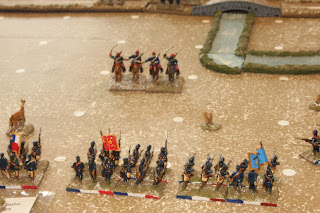 Phil threatened me with his cavalry for a turn, but they soon retired. Notice how both infantry and cavalry are nicely in focus. 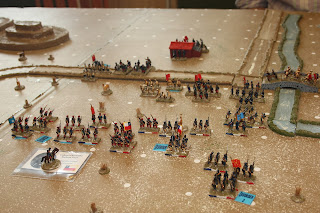 Having seen the cavalry off, I formed up into Attack Columns and advanced. Phil countered by deploying into firing lines. My artillery were deployed on a hill to my rear and were unable to hit anything. 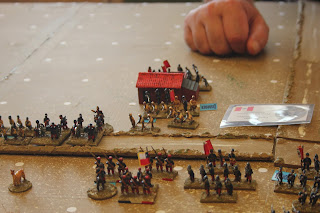 I eventually managed to get one column to charge home and force a Peruvian unit back, but I didn't break it. Elsewhere I'd taken so much disorder advancing that my attacks were ineffective. 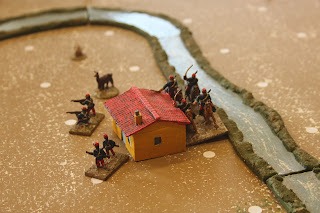 Meanwhile Phil circled round with his cavalry and occupied the hacienda on my right flank. 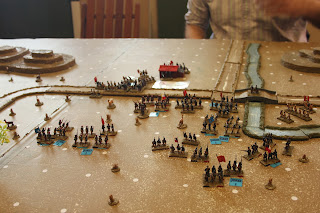 My attack had pretty much broken down now. It was at this point I discovered I was using an out of date playsheet. Not that it would have made much difference. 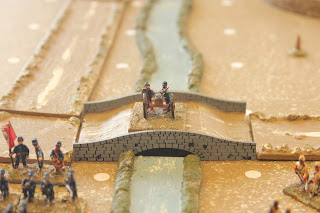 Phil even managed to deploy his gatling gun on the bridge, but by that point I'd given up the ghost.

So.....not exactly a complete disaster. Found a couple more bugs in the core rules that I've got to smooth out, and I need to delete the out of date QRS file.

However I need to revisit the melee rules. The next day I reset the figures and ran through the assault again using the up to date rules and deploying a skirmisher screen to absorb the fire and protect the attack columns. It sort of worked, but didn't look right.

I fear I have a problem here. The game is giving me a good late 19th century European simulation, but it's not very Latin American. The melee rules are letting me down. I've got some clunky "superior formation" modifier in there and I'm trying to force the mechanism I use for the SCW into the rules because I like it. That's not a good enough reason.

I've had a few ideas since, but I need to work out the wrinkles. I possibly need to go back to the sources again and try to work out exactly why the Chileans could close assault and win against what should be withering fire and the Peruvians mostly couldn't.

BTW I'll be at Newark this weekend on the SoA / Northamptonshire Battlefields Society stand. Stop by and say hello.