The blog has been quiet for a little while as I’ve been out of the country with Mrs T. We got back early last week, but there were tasks to be done, lawns to be mowed and a job to go to so no chance to sit down at the key board.

We’ve been in Cuba on a tour, visiting the western half of the island and covering the areas haunted by Hemingway. Like a lot of Europeans we thought we’d get in the trip “before the Americans arrive”. This wasn’t expected to be a military history tour de force and whilst I picked up some items for the hat shelf I didn’t and don’t intend to plunge into the Wars of Independence or the Revolutionary War.

However, like most wargamers, I’m partial to an armoured train. Consequently I got moderately excited when I saw that our itinerary included a trip to Santa Clara to visit the Armoured Train monument.

The attack on the armoured train in Santa Clara effectively marked the end of the war against Castro’s revolutionaries for Batista and his forces. It was undertaken by troops under the command of Che Guevara although he wasn’t there personally. You can argue round the houses about whether he masterminded the victory or whether it was one of his subordinates. However, it happened on his watch and if it had gone wrong he’d have taken the blame, so I guess he gets the credit too.

The story goes like this. Batista sets up an armoured train and mans it with 400 of his best troops (they always say things like this; why would he have put 400 useless troops in it?). It is protected by .50 cal MGs and anti-aircraft gun, presumably deployed in ground attack mode, in best “AK47 Republic” style. This wonder weapon would give the forces strategic movement, protection and the power to intimidate the local population and the lightly armed revolutionaries.

Like many of these grandiose plans that have the air of the last roll of the dice it didn’t have the desired effect. Guevara’s forces derailed it with a bulldozer then chucked bundles of grenades underneath it to disable it further. In the event that this tactic failed they had a locomotive packed with explosives they were going to run into it.

As it turned out the initial plan worked and the 400 men in the train surrendered to 13 revolutionaries. Or 25, depending on who you believe. I'm going with the 20 or so, as their names were listed in one of the cars:- 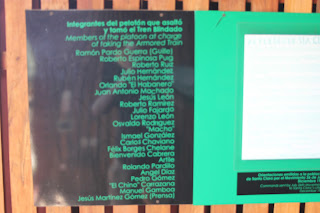 The memorial to the attack in Santa Clara is worth a visit if you’re ever there. It is strikingly Cuban in its execution, combining Revolutionary triumphalism and artistic interpretation. 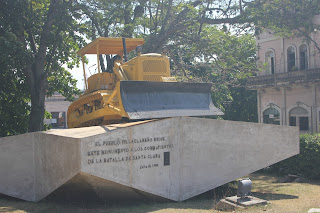 On approaching the site the first thing you see is the big yellow bulldozer, mounted on a concrete plinth. It looked to me at the time to be one of the best preserved pieces of industrial equipment anywhere on the island. It certainly looked freshly painted, which is more than you can say for a number of things on the island. 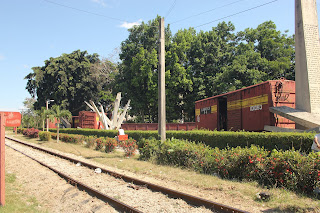 The memorial is next to the railway line and consists of a number of box cars and a flat bed. The actual engine itself isn’t there, - presumably too valuable a piece of equipment to leave lying around. Our guide, who was otherwise very good, was unable to tell us where the locomotive is. The guide books are fairly sniffy about the location of the memorial because it is next to a railway line and a busy road, however seeing as that’s where it all happened that’s where the memorial needs to be. 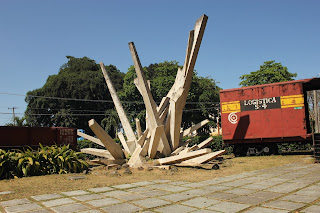 The whole thing is dominated by a white concrete structure which is an artistic representation of an explosion. One of the box cars has an art gallery in it. Very Cuban.

As far as I can make out it was more of a mobile command post with bodyguards than an armoured train as most of us would understand it. It had a number of drawbacks. First up, the floor is made of wood, hence the effectiveness of throwing grenades or molotovs underneath it.

Secondly the defensive armour isn’t something to trust your life too. It consists of two steel/iron sheets with an infill of wet sand to stop spalling inside the cars. 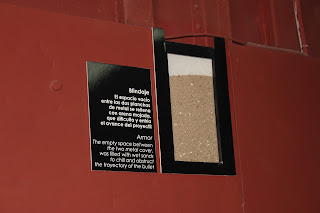 Thirdly there don’t seem to be any firing ports. You have to slide open the doors in order to fire. Finally the flat bed with the AA guns on it doesn’t have folding sides so you can’t depress the barrels to fire at targets on the ground. 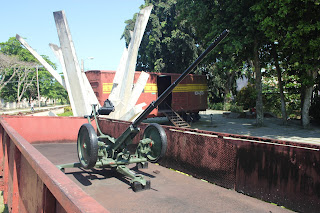 I suspect I’m being unfair, but you wouldn’t get me inside it.

So it really is no surprise that the occupants took the first opportunity to surrender when the whole thing feel off the track.

The whole thing is commemorated on the reverse of the Three Convertible Cuban Peso Banknote.