As I mentioned a couple of blogs back I've acquired some 6mm 1914 armies from Pete Berry at Baccus. I could hardly wait to get stuck into my little Frenchies in their pantalons rouge.

Actually, to be honest, I needed to try out my basing ideas to see if I've got them right. Also I need to try out some painting styles to work out how I'm going to do these.

Pete gave me some advice but it was all about washes and undercoating in different colours and I like black undercoating and dry brushing. Having said that the French are more difficult to do than the Brits & the Germans as they have different coloured trousers and kepis, whereas the other two's uniforms are, well, more uniform.

One of the aims is to make it really clear what everything is. It is possible to mix up things like MGs & infantry at a distance.

The infantry are on 15mm square 2mm mdf. I've got two figures on a base. The bases are finished off with PVA glue and sand. These figures are the advancing ones, all ready for a bayonet charge. 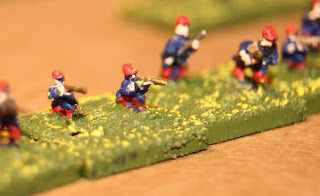 Pete also does some firing figures. Had a bit of an issue with the photos here. I'm using extension tubes on my DSLR to get in close, but I'm having problems with the depth of field and focussing. And the light wasn't quite right either.

The real jewels in the crown are the artillery pieces. These are the famous French Soixante-Quinze. The guns are a single casting and the detail and proportions on them are stunning. These are based on 20mm squares. 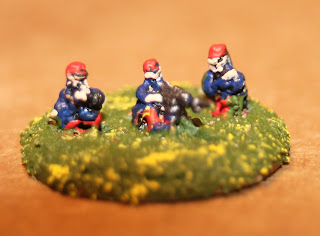 The MGs are the Hotchkiss variety and come on a round base. The base is about the same size as a penny, which is the same depth all in as a 2mm mdf base, so job's a good 'un. 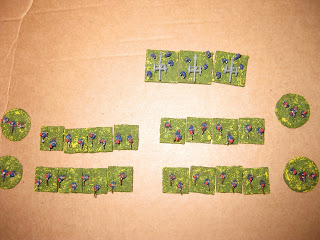 The figures are intended to be used with the Op14 rules which work at a Corps level. This pictures is of a French Corps, almost. The four bases of infantry each represent a brigade, so this is a two division Corps. The three guns are an Artillery Regiment. I really need one more. The MGs are used to represent when a brigade has been fully deployed. I need to add an HQ base. That'll probably be on a 2p piece, or a 30mm square.