Cid goes Forward and Back

The last posting about the El Cid project covered an attempt to wargame the period using AMW. Whilst it was a tense game it wasn't really Hispanic Medieval Warfare as I understood it. Reflecting on the game afterwards it was clear to me that I needed to try a different approach.

One of my favourite rule sets is Armati. There are known problems with them as a rules set. Once you really know them it is possible to suck all the fun and historicity out of the game through cheesy tactics. And the army lists in the rule book aren't cutting edge either.

However it's quite a good set of rules for cavalry heavy armies, so it's worth a try. I've got nearly enough toys for a reasonable size army for either side (not enough Spanish heavy infantry) and I was comfortable modifying the lists to produce a combined Andalusian/Almoravid army. For this Thursday night outing I was joined by Chris K & Phil, with Chris A turning up a little later.

I took the Moslems, and Chris K took the Christians, helped by Phil. 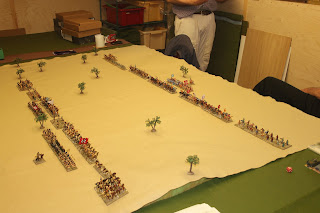 The Andalusian/Almoravids are to the left, the Spanish to the right. 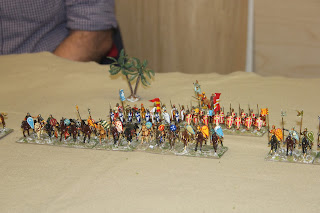 The strength of the Spaniards is in their heavy knights, which are very colourful. 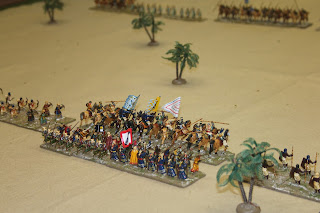 However these are matched by some pretty good heavies on my side, some of whom also have bows (not in shot). Which I forgot. 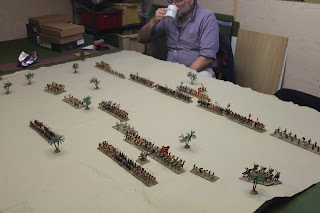 The Spaniards won the first initiative and asked me to move first, so I headed off towards the enemy. Alas I hadn't made the table wide enough so I could out flank them with my light horse archers. 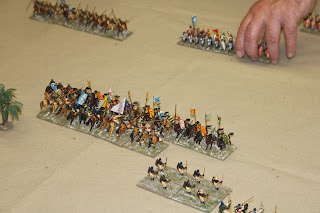 Closing the gap triggered obligatory charges for the Spanish Caballeros, across the board. This included my right wing... 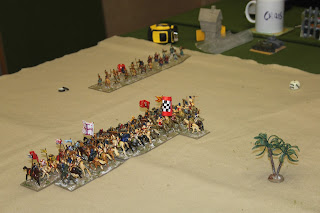 ...which had got camels in it as well as Murabittin heavies. The ones with bows that I forgot about. 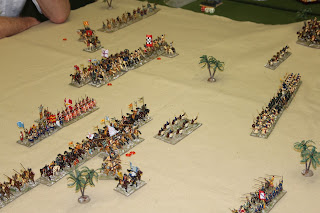 In the centre the offset line up and some crappy die rolling had a unit breaking in short order. 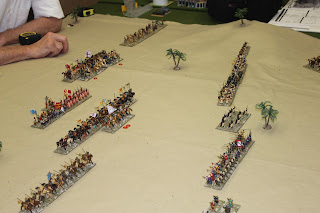 On the far side my camels panicked their opponents (result!), who then broke as they didn't have impetus against my centre cavalry. There's no photo record of this which is a nuisance. This was actually where my chance of winning the game evaporated. The camels were able to breakthrough to line up a flank charge of the rest of the Spanish horse out here. However they got shot away, taking a load of hits from a line of skirmishers, not one of whom missed the target. Three shots, three hits, dead unit, and they had the general with them. The odds on this happening are very low. 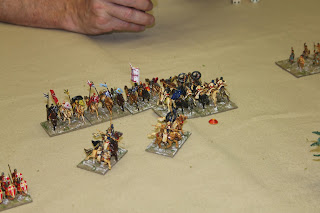 And then a few ones on the dice and the other end of the line went too. How annoying. 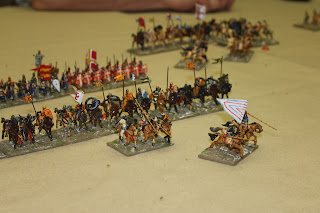 My cavalry in the centre fell apart too. 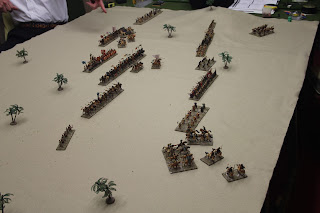 I wasn't doing very well on my left wing either. 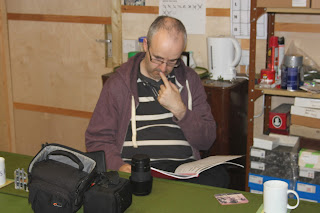 By this time Chris A had arrived. Which was handy, because we had a rules query and he's good at looking stuff up. 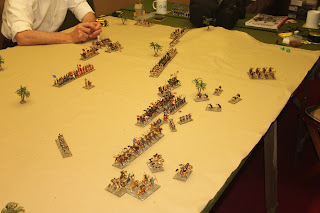 Anyhow, Chris K's fatigued cavalry had to make an obligatory charge into my infantry line, clearing a load of my skirmishers out of the way before they could throw any javelins at their attackers (AMW wins here with the defensive fire phase I think). I reckoned I'd be okay here. Wrong. A 6:1 die roll or two and there's not much you can do. 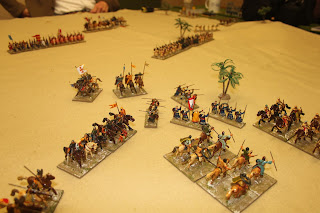 Then most of my infantry collapsed and my army broke and it was all over.

A fun little game, and it's good to get the shiny toys out. Armati still has its problems but reflecting on the game earlier today I reckon the core mechanisms with a bit of tweaking and some squares might be what I want.

Watch this space.
Posted by Trebian at 16:29