Over the last few days I have finished off a German Corps to go with my Frenchies who were covered in the last post. I've had some stuff on so these have taken longer than expected although they are easier to do. All one colour with a khaki picklehaube cover.

I also added some bits and pieces to get the French up to strength. 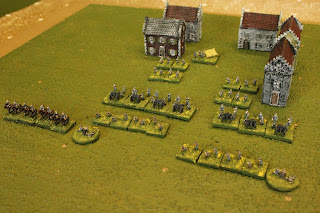 It just so happens that the boards I made up for Hurried Hydaspes have the right sized grid for Op14, more or less. The buildings are some classics. They're from the very first range Baccus produced, - a resin Vauban fortress. I think they're a bit big, so I'm still musing what to do with buildings and terrain generally.

Right, so what we have are two deployed infantry brigades (those with the round MG bases), two brigades advancing behind them, four 77mm field guns, three 105mm howitzers and a command base with a tent. Off to the side is a Cavalry Division made up of Uhlans. They're not part of the Corps. 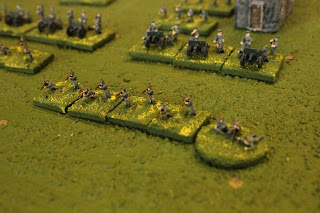 Here's a close up of a deployed infantry brigade.... 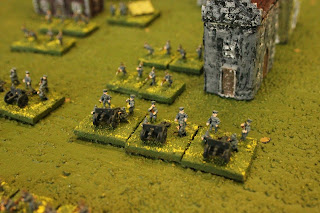 Because I'm a cheapskate I have split up the HQ base from the Division pack to make more than one HQ. I'll need a few as I need one per corps. Here's the Corps commander in heated conversation with his aides-de-camp. 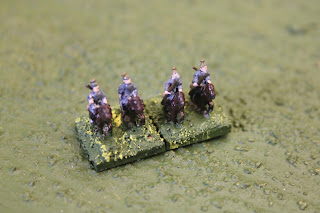 A quick close up of the Uhlans. The base on the left has two command figures on it. I  encountered my first real problem with the Uhlans. One of the lances was a bit weak and it has broken in half. It's not a big deal, I suppose, but I can't see how I would replace it. 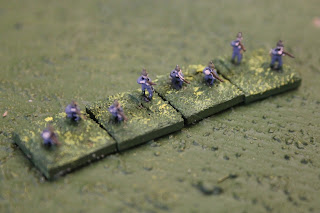 Finally, for the Germans, here's a snap of the infantry in line. You'll note that I haven't gone for the electrostatic flock beloved of 6mm players and featured on the Baccus website. Honestly, I think it looks too long and conceals too much of the figures. I'm happy with my glue and sand look.

Now for the French reinforcements. 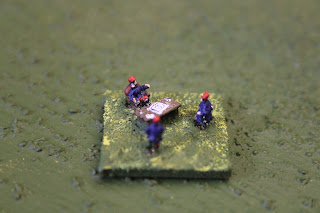 First of the Corps C-in-C, relaxing at his map table in the glorious August weather. 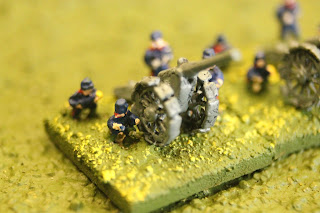 Finally a 120mm howitzer. The Corp gets three of these. If it's lucky.

I'm really pleased with the look of both sides. Pete is a terrific sculptor and figure designer. If he worked in 28mm he'd be spoken of in the same breath as the Perry twins et al.

The Op14 rules can be played solo, as they use a playing card activation sequence, so now I've got enough for a game I might give it a go.

When I've made some terrain.
Posted by Trebian at 17:37