Time to draw breath and update you all on the 6mm Great War project as I haven’t written anything for a while.

On the figure front I’ve got a couple of French corps finished, one German corps done and one awaiting basing. That’s quite good progress as I’m also working on 20mm plastic Andalusian cavalry at the same time.

There’s still plenty more to do. I haven’t cracked open the BEF yet, and the missing bits of my order from Partizan from Mr Baccus turned up recently as well. Mostly more guns.

The figures aren’t really the problem. I have got in the swing of how to produce them and they’ll not be held up. Already thinking about whether I want to buy more*. The fact is that this is a new project in a number of ways, not just period.

Which is to say I don’t have any 6mm scale terrain. So I have to make that as well. What’s more modern warfare in Western Europe is no respecter of terrain. Armies will fight anywhere. In earlier period armies would give battle in locations suitable for both. The number of battles (especially in the ancient period) where the terrain is just a few hills and a river to pin the flank vastly outnumber all other types. Once you get into the industrial age with massed armies basically the armies will fight anywhere and over anything. Consequently you need more table dressing. In the case of what I’m trying to do as well, - Corps level actions up to army size in 1914 – the battles cover large areas and encompass built up areas, big woods, valleys and rivers. Hills ain’t just gentle slopes either.

The other thing is that generally wargames terrain isn’t to scale either, regardless of what we pretend. I’ve got 15mm buildings from a number of manufacturers, all compatible with each other. However in the case of public buildings, like churches in particular, the models are much too small. Churches are really big buildings. Our local village church has probably got capacity for nearly 200 people. If you took the floor plan of most 15mm buildings of this type could you comfortable stand 200 figures in the area? Trees, as well, are way bigger than we model. I’ve got a full grown ash tree in my garden. I can assure you that it is more than the height of 3 or 4 figures.

Rivers in Europe are really wide as well. Rivers in Britain tend to be narrower and faster flowing than the likes of the Rhine and the Seine. I’ve got a 20mm scale Bellona river that is probably even too small for 15mm. I’ve just pulled up a photo of allied forces crossing the bridge at Nijmegan in 1944. I can count 4 shermans and 8 trucks, all widely spaced and I can’t even see the ends of the bridge. Anybody puit a river like that on the table top?

So really having terrain exactly in scale isn’t going to work, especially as my ground scale is 6cm = 2km.

My first aim was to sort out some buildings. A bit of searching found this terrific website run by a German school  aimed at people who want to build a Christmas diorama: link

These can all be printed out onto card and are free. They’re also pretty much spot on 6mm scale.
I made up three or four of them, gluing the thin card round a polystyrene core** to stop them being crushed and to give them a little bit of substance.

They do look great, but a single building is taking up most of a square. Plus they are dwarfing the figures. Now I know this is correct, but the wargaming aesthetic is completely wrong. Luckily the buildings are downloadable as pdfs and my desk top publisher lets me load them and break up the graphic elements. I can then scale them down to half size, which means they take up about a quarter of the space.

These might be too small, but I’m going to put together a dozen or so of them and try them en-masse on the table. A few of the nets are really simple and I can get 8 on a page.

I had a trawl round 'tinternet looking for 6mm trees but I need a lot and didn't want to blow my figure budget on them. In the end I've scratch built a few.

Finally I made some road and river using brown paintable window sealant. I followed advice from this website: link but I'm not quite as competent as the author. 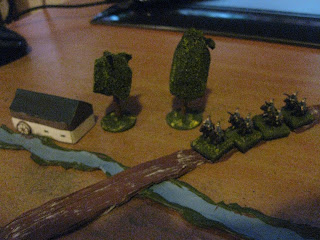 
** I have a Games Workshop hot wire polystyrene cutter. Best thing I ever bought from them.
Posted by Trebian at 20:55