In order to take my mind off how depressed I am at the collective act of insanity committed by the English & Welsh yesterday I had a go at refighting some of the Great War for Civilization. A bit in which the British took no part, using my new Baccus 6mm 1914 French and Germans

Working from Ian Senior's "Home Before the Leaves Fall" (aka "Invasion 1914") this game is an approximation of the first day of the Battle of the Ourcq in September 1914. The Germans are holding a line of plateaus just in front of the Ourcq River; the French are trying to drive them off that position and back across the river.

For this game of Op14 I had a whole load of freshly painted hill tiles which I needed to try out. And a new bridge from Baggage Train that Phil had given me. 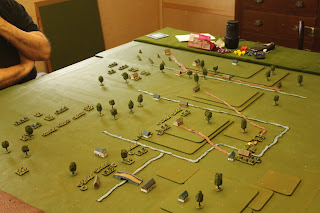 The French, commanded by Phil, are on the left. They have a couple of Reserve Corps, which consist of 6 brigades each, plus a standalone Moroccan Brigade on the right and a Regular Division of two brigades on the left.

The Germans have a couple of Corps, one of which has one Division entering centre right, and a Cavalry Division protecting its right flank. 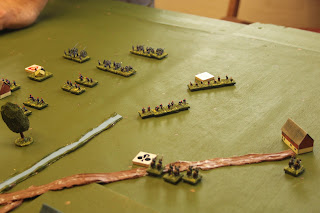 Over on my right I started by using my cavalry to cause the French Regular Division to deploy, thus slowing down their advance. For those not familiar with Op14 units are activated by playing cards (tiles in my case) . The suits of cards sometimes mean units can and can't do certain things. 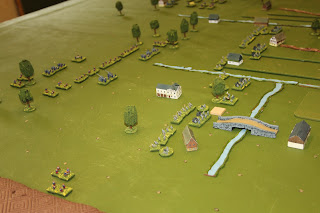 On my left Phil sent the Moroccans out on a wide sweep to flank the defensive line. 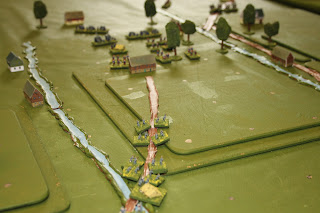 In the centre my Reserve Division was rushing forward to plug the gap on my right centre. 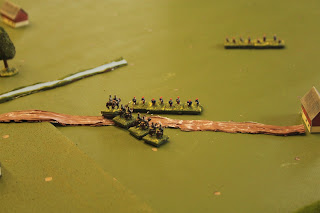 On the right my Uhlans had a brief skirmish with a French Infantry brigade. 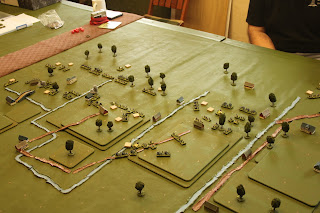 The French are now pressing forwards all along the line, but my reserves are winning the race to get to the crest line. 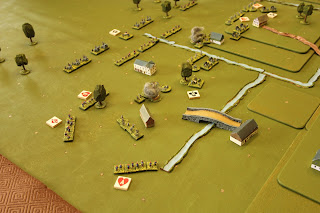 Over on my left the Moroccans turned the line, forcing my flank unit to pull back to stop being overrun. 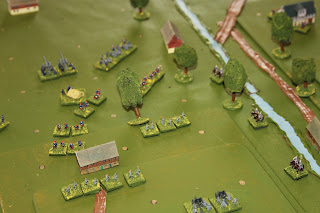 On the right my Uhlans had crossed the river (all villages/buildings are crossing points) and again triggered the French deployment, allowing me enough time to get my infantry onto the ridge line. 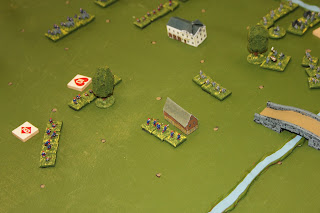 On my left the Moroccans drove back my flank brigade 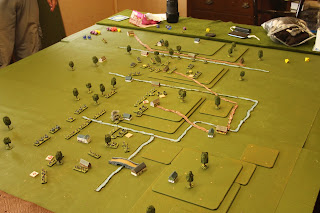 All along the front I'm holding on fairly strongly, except for the left. The French Soixante Quinzes are delivering repeated rounds of ferocious bombardment and causing a lot of damage. 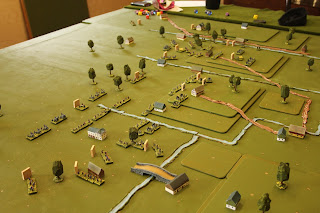 Up to this point we'd been playing the playing card tiles face up, as is normal in the game using cards. A brief discussion between us over the consequences of this ensued. As I said above certain suits mean units can't do things. One of these is that French Reserve units don't move if they're dealt a spade. This means that the Germans know where it is safe to advance/fall back and so on. A stroke of genius was for us to draw the tiles and stand them on their edge, revealing them as we count up from the Ace of Hearts to the King of Spades. 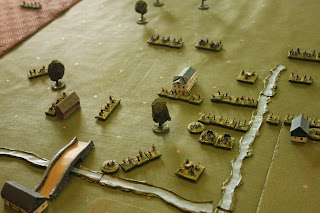 My left wing is starting to crumble despite me deploying my MGs. 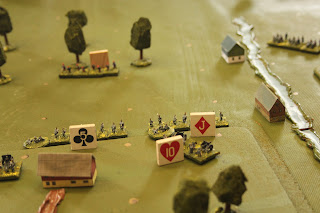 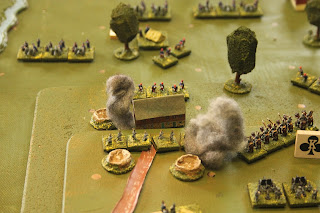 On my right the Soixante Quinzes thundered out. Hits on units in buildings are not applied immediately, but are stored up until the unit moves or is assaulted. Instead of putting playing cards on the unit as suggested I have made some shell holes to remind me how many cards need drawing when the assault happens. 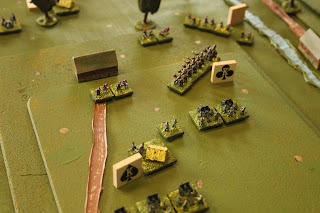 My right wing is a real mess, following the bombardment. One brigade has been blown away and the other is at half strength. The Uhlans have moved up in order to dismount and protect the wing. At this point we are about a move or two from nightfall. Can I hang on? 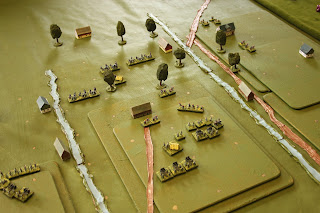 The game closes with everything on the right, both French and German, looking a bit ragged. 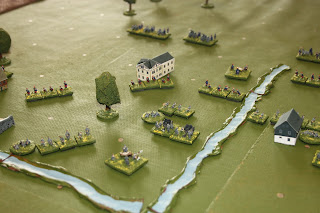 On the left I've held on, but I have no where to go, with my back to the river.

Then night fell. As we were about to work through the End of Day sequence we realised we had forgotten the unit exhaustion rules. This meant we had probably fought on much longer than we should have and I probably would have caved in on the right.

In summary we had an interesting game that gave us a believable result. It was a useful refresher of the rules and sets us up for more of this campaign over the next few months.

I also need to make a lot more rivers and roads. And trees.
Posted by Trebian at 14:33