After a few hours sleep I awoke to that COW rarity, - heavy rain. I was up promptly as I needed to add the figures to the terrain I'd set up the night before for "It's Getting a Bit Chile".

I had a rough scenario in my head but it depended on the number of players I was going to get. I'd got four signed up the night before, and as I was getting the toys out the number rose to 5, so I planned for 6. I went for an encounter battle, with the Chileans defending some river crossings against the Alliance. I set it up as three mini-games side by side effectively, each with a division facing off against something similar. That meant the players could get on with it once the knew the rules.

The Chileans are too the right, the Peruvians & Bolivians to the left.

As you can see I got six players, and even acquired a spectator too. After a couple of turns I told everyone to use the QRS for the combat phase and just get on with it. Apart from a chronic shortage of D8s (left half mine at home) it seemed to go well. 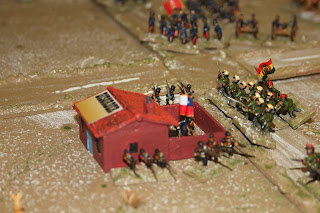 I won't give a blow-by-blow account, but in the centre an epic struggle around the hacienda ensued, finally resulting in the Peruvians seizing the building. Good shot of one of the new Disorder markers, which is supposed to go under a figure base, not on top of the roof. Players, huh? What can you do with them? 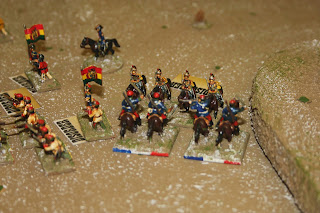 Other highlights included the inaugural charge of the Bolivian Presidential guard. Alas they didn't come out of it well, although I'm sure they would claim to have tempted an opposing cavalry unit off the battlefield. 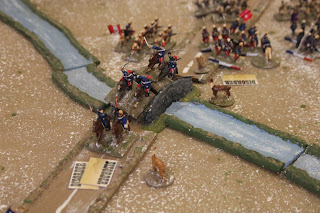 On the far flank the struggle for the bridge was hard fought, with the Chileans eventually being driven back.

I was very pleased with how it all went. The players umpired most of it themselves, and it kept one or two spectators occupied as well for a lot of the 3 1/2 hour session. All the players came back after the coffee break too, this year. All the spare sets of the rules were taken away and my extra one too was specifically asked for. Yes. One of my better sessions of recent years.

Following lunch I took some time out to do a trip round the other sessions after having a go at a couple of commercial games Nigel D had brought along. One was the much talked about "Waterloo 1815" from last year. The other was "VIII Corps" a game about VIII Corps on the Somme, available from Wargamers' Vault. 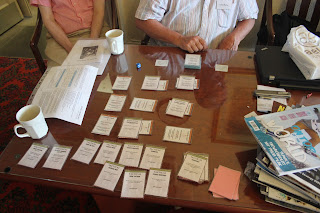 This is a very ingenious card game, representing the VIII Corps attack. The terrain is represented by 9 cards laid out in a 3 x 3 grid, which you can see in the middle of the table. The players each have a card deck. For the British the cards divide into the Tactical, that you store up for when you go "Over the Top", and the Strategic, which are mostly artillery bombardments. The German deck has a similar split and includes defensive fire as well as Wire, MGs, bunkers and so on.

The British have to capture two third-line cards. Captured terrain is represented by turning the cards sideways. You'll note in the photo that this has been achieved. Yes. I won as the British. Don't want to brag, but I WON WITH THE BRITISH. This is supposedly not possible, or at least very, very difficult.

Apparently there's a X Corps version too, with others to follow. If they do III Corps I might be tempted. It is a very well designed game with a lot of educational content.

BTW The win was a fluke as I played it again later on against MNG regular Chris A, again as the British, and got stuffed.

I also took the time at this point to play Clockwork Slim River. 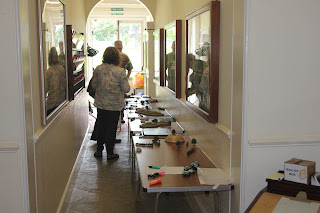 About which probably the least said, the better.

Post afternoon tea I headed off for the Battle of Lissa, the famous ironclad encounter between the Austrians and the Italians.

There was a lot of historical research in this game and a lot of background. The Austrians were short of guns and had to try and ram. The Italians were useless and the Admiral went missing at the beginning of the battle. I got his ship. 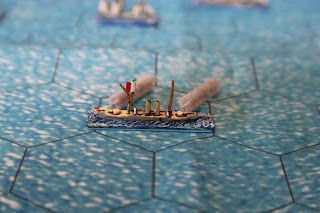 The Italian Admiral's ship had two chuffing great turrets and the turning circle of a dead rhino. So I sailed round blazing away 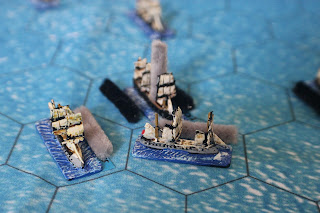 Everyone else just seemed to sail into one another in utter confusion, which is what happened historically. So, result for the designer then.

I also found out some one makes most of the ships from the 1879 Pacific War in the range used here, so this looks like something I really will be following up on.

Then it was time for Dinner.