After a fine dinner, as ever, it was time for some after dinner fun & games.

My camera seems to have gone missing part way through the evening so I've only got one game with pictures.

John Armatys is working on a card based version of his Roman Republic Careers game. 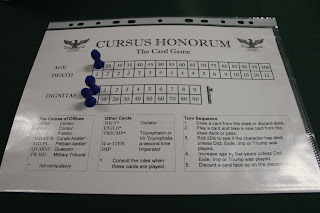 It's called Cursus Honorum - The Card Game. Snappy title, John. This covers the ground that the WD Dispaly Team North's game of the same name, also designed by John, only using cards. The thing with the cards as John explained is that you can put together the sort of text you see on Roman tombstones. 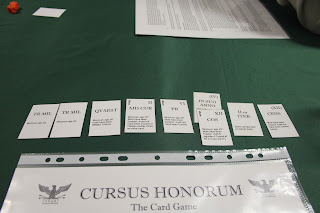 I did pretty well, and managed the full course, as did one other player. The game is still in development and we had a good discussion afterwards, contributing quite a lot of ideas.

After that I sat and chewed the fat with some COW veterans on several subjects before fitting in another game of VIII Corps, and something else I can't remember, I think (no photos, no memory)

Sunday morning dawned brighter and drier and I headed off to the Practical Room for a presentation of the new "Airfix Battles" game, designed by WD member Allan Paul. 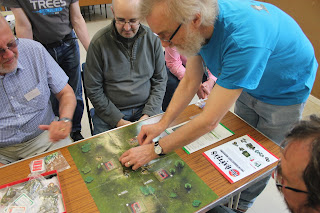 
I got the US forces and faced off against Russell King with the Nazis. The game is basically a skirmish/company level game akin to RFCM's PBI. Everything you need is in the box, and you can replace the good quality cardboard components with your own Airfix armies over time.

The game uses squares and has a clever card based activation and order system. It plays really nicely and at £25 won't break the bank. It's a sort of entry level game that builds up complexity as you add more bits in and play the later scenarios in the booklet.

I filled the rest of my Sunday sessions with a talk /game design session on the need to control the narrative in modern conflict (which even raised a reference to an old game of mine called "Hack!" which was a game about war reporting I designed in 1992) and a lecture on the English Barbary pirates from David Bradbury.

All too soon it was time for the WD AGM and the fond farewells and "See you next year"s to old and new friends.

And off to work on Monday.