We've been touring the shows for the past few years promoting the Northampton Battlefields Society, usually with Phil's battlefield model. We have had several goes at playing as a game with mixed levels of success.

What we want is a game that shows the players the key parts of the battle, from negotiations through to the eventual rout but still giving them the opportunity to influence events. What we didn't want was a 6 hour 28mm slogfest.

Phil suggested last year that the style of game produced for "W1815" the very popular bi-centennial Waterloo game would be appropriate. I'd seen people play it but it wasn't until COW this year that I got to sit down and play it myself. It was then clear that Phil was right and also that some of the ideas I'd been kicking around over the past couple of years might integrate into the system quite nicely.

I did some solo playtests last weekend and put together a prototype game based on what I'd got in Shedquarters. That meant I was ready for some test games on Thursday evenings. Due to domestic responsibilities and the demands of work on the other MNG members it ended up with just me & Will. This is no bad thing, because I got to play with the toys rather than just umpire and Will is a nice opponent who lets you win sometimes. 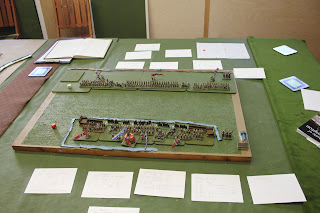 This is the set up from behind the Lancastrian lines. The interpretation of the battle is based on Mike Ingram's book, which if you don't already own a copy you should go and buy now (all proceeds go to helping to preserve the battlefield).

The white cards represent the actions available to the various units / battles of each side (3 each), plus their artillery and a few characters such as the Archbishop of Canterbury, the Papal Legate Coppini and Margaret of Anjou. The cards are turned over at various points if certain events happen so that actions change or in some cases to indicate that the card is used up. Depending on the sequence you do things some cards might not get used.

At this stage I hadn't worked out what to do about the cavalry melee that precedes the battle and leads to the sacking of Northampton. 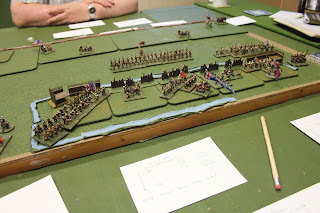 When Will arrived he sat down behind the Yorkists. I think if we ever get this to shows that would be the usual choice for the visitor as you have the most to do and them ore interesting choices. He opened with the Archbishop negotiating. I tried to fire my guns at him (failed) he then had Coppini excommunicate me. I again failed to fire my guns. He then attacked with Fauconberg on my right. My final attempt to fire the guns failed, so they were totally kaput and removed from the game. Will then advanced with Warwick and my chaps furiously fought back over the barricades, inflicting some damage on the Yorkists, who were clearly getting the worst of it.

Then the Yorkist wunderkind, Edward of March, advanced. Due to a combination of the pressure on the encampment, the failing guns and the excommunication, Grey of Ruthin changed sides, and Edward's battle was in the encampment. Before Margaret could escape with her husband and children March's men had rounded them all up as the Lancastrians fled. 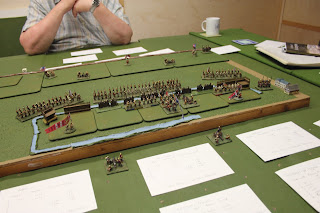 The playtest was helpful as it found some typos on the play cards, and also identified some things which were either too easy or too hard. We reset for another game and Will won again, and again for the same reason. 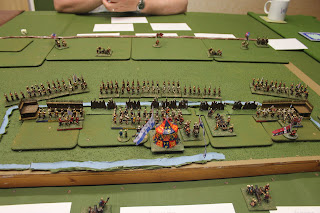 Next up he failed to get Grey to swap sides and eventually the Yorkists crumbled and fled. I think this is the game when I actually got the guns (or rather remaining gun) to fire.

It all looks pretty good, in fact. I had some thoughts afterwards, and will introduce a Henry VI card so people can see how generally useless he actually is, rather than deduce it from his absence. I should get that done for next week and we can have another go. I think we can also dispense with the cavalry skirmish as it adds nothing to the eventual outcome

Now, need to look in the garage for some wood to build a permanent board....

PS: Do you all remember the Great Battles of DBA book I did Cannae for a while back? Well, work has started on volume 2. I'm going to do Zalaca, 1086. Just working on the set up. 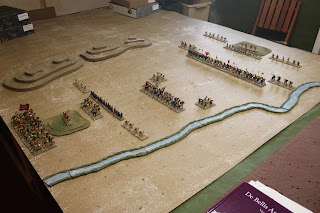