So as I mentioned previously I took the prototype game to the Northampton Battlefields Society Committee Meeting and got our Chairman Mike Ingram (who wrote THE book on the subject) to play it a couple of times, once as Yorkist and once as Lancastrian against Phil and me respectively.

Both games had a Yorkist win, but with King Henry VI escaping with his missus as the Yorkists stormed through the camp. Mike was impressed and liked the historical feel of it. Phil liked the improvements I'd made since the last playtest and so I agreed to build a full show version for unveiling at second Partizan on the 21st of August.  We also tentatively agreed to try to develop a version for sale to the public.

So today I had to size the game board and so on. 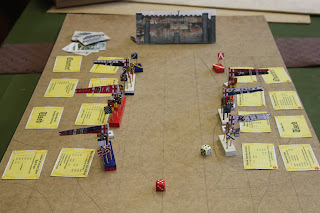 The blocks are sorted now, although I might change one of the Lancastrians. It's currently in the colours of Thomas Percy, Lord Egremont and it should probably be Talbot, Earl of Shrewsbury. The unit/action cards are close to finalised as well. I think they look rather spiffy, although I'm having an issue back printing them (they're double sided). My printer slipped ever so slightly so I was out by c5mm. I tried to do them as two different sheets and gluing then laminating but they're not quite right. Probably good enough for the first show however.

This picture shows the blocks on the base board so I can draw the outlines of what I need to do.

The base board will be built on a sheet of mdf with a layer of hardboard then plywood for the contours. That way I can cut into them to make the streams - Fulbrook and Battle Dyke - that we believe were incorporated into the Lancastrian defences. That'll give me depth when I glue them to the mdf. 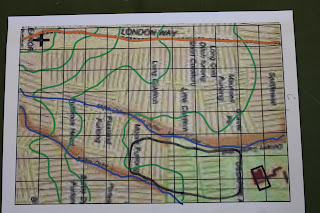 My board is based on the one Phil uses for the display model. He described how he built in in one of his blogs. The terrain is taken from a combination of a map of the field system from the 18th century and the Ordnance Survey map of the area. Using Serif Draw Plus I was able to load these both as layers in the same document and overlay a grid on top of them as you can see above. DrawPlus lets you hide and reveal layers in combination so I was a able to put the grid on the OS map and trace the contour lines. I could also mark the Eleanor Cross and Delapre Abbey and then using them as a key I could line up the 18th century field map to get the line of Fulbrook and Battle Dyke as well as the London Road.

The grid squares are scale 3" as the final board playing area will be 2' x 3'. 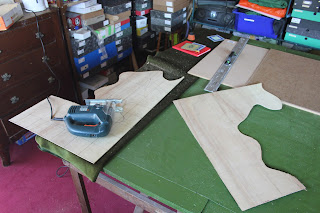 Then onto Grown Up stuff. As I said when I started this blog many years ago being a grown up wargamer is great as you have access to power tools. One of my favourites is my Black and Decker jigsaw as it enables me to cut out curvy shapes such as I need for the contours. 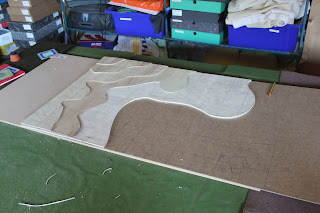 I've got 5 contour layers and the drop isn't quite enough for the ground scale probably. That rise in the top corner is where the Eleanor Cross will go. Where I'm going to get a 6mm scale Eleanor Cross from I'm not sure yet. Any suggestions most welcome, otherwise I'll bodge something up. 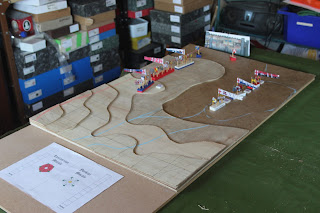 I then was able to cut the hardboard down to size. The mdf is actually 2' x 4' so that gives me a 2' x 1' area to put a name plate and morale/casualty tracks. After that I could mark in chalk where the water courses will go, the outline of the camp and the London Road. I will admit to taking liberties with the lowest contour level to make it easier to build the camp. Once everything is glued to the hardboard and set overnight I can use the jigsaw to cut the water courses out. I can then glue everything to the mdf and trim it to fit, before building up the stream beds so they don't look like a ravine.

I'm going to mark out the ridge & furrow fields with something like No More Nails using a narrow cut tip. Once that's all dry I'll give it a coat of textured paint before finishing off with my favourite Dulux green.

I'm still thinking about exactly how to do the camp. I'm thinking it'll be a removable piece so it doesn't get damaged in transport. Same with the Abbey, although I'm not sure how to do that yet.

Oh, and I have to sort out how to represent Northampton as well. That's currently a paper cutout in the top right corner.

So, feeling a bit chuffed to be honest. A good day tomorrow on it and I should be well on schedule for Partizan.