I have to admit preparation is taking more than 15 minutes. However I'm making good progress and have only made a couple of mistakes so far. One was easily recovered, the other will require some more work.

The next step after the end of the last blog was to cut out the waterways (marked in blue chalk on the previous picture) and define the area of the camp. Then I could glue it all down to the base board. 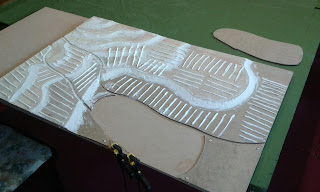 Here you can see the streams cut and the site of the camp removed. I've glued everything down at this point, including the bottom right corner where Delapre Abbey will go. This was a mistake as I think I want to cut out the middle where the Abbey will be so the model is removable to make transportation easier. The same will apply to the camp, which I didn't glue down. The white lines are strips of "No More Nails" and they're to represent the ridge and furrow field systems that were in place at the time. 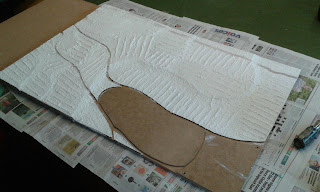 Once this had all dried I gave it a coat of my trade mark textured paint. This seals it all in and gives a really robust finish that you can dry brush to give a bit of texture to the battle field. You have to be careful as you can graze your knuckles on it when it has dried. 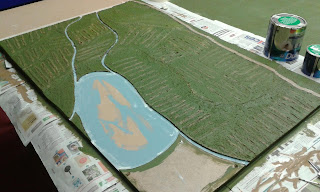 Textured paint also takes paint well and fills in all the little cracks. A quick coat of my table green and some brown dry brushing round the ridges gives a bit more depth to it all. I agonised a bit over the colour of the streams. Blue isn't very realistic but every wargamer knows rivers and water is blue, so I went for blue in the end. It also meant it's less hard to confuse them with the road at the top of the board. 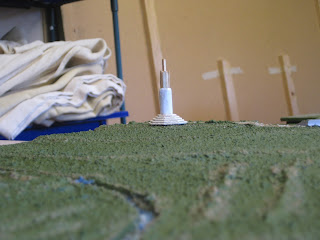 I was a bit concerned about the famous landmark in the top corner of the board. No one makes an Eleanor Cross in any scale as far as I can see. My ersatz version is made up of matchsticks with a paper wrapper and it stands on concentric mounting board octagons. I drew these in Drawplus then spray mounted them onto the mounting board before cutting them out. Surprisingly easy. 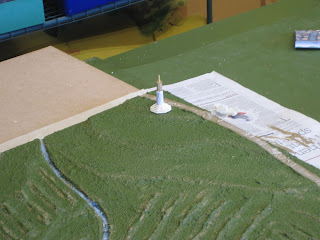 I think it'll pass muster until I can get something more permanent. It's currently sitting on the painting desk whilst I try to suggest the niches and carvings with a very fine brush and some black ink. 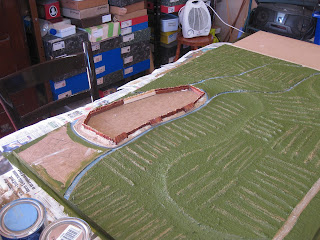 The camp defences are made from matchsticks clued to ice lolly sticks and then held in place with "No More Nails". They've been mostly dyed with a GW Flesh Wash to keep the grain effect. Near disaster two happened at this point as I didn't build it in situ and put the gun ports at the back. This became obvious when I put it in place. Luckily the glue hadn't dried so I was able to swap them round. 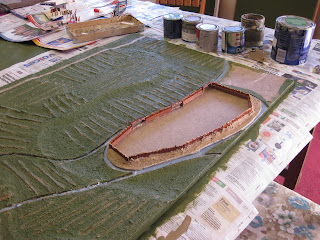 Looking quite impressive. I can't finish it until my order of tents and nick-nacks arrives from Leven Miniatures (hopefully tomorrow). Then I'll texture the interior and drill some peg holes that'll keep it from moving about once it has finished. 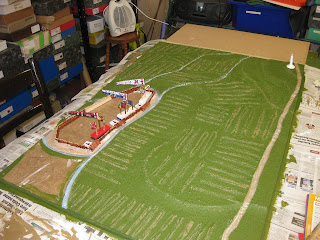 Here's a picture with the Lancastrian blocks in place, just checking I've got the gun ports and so on where needed. Unlike Phil's more sophisticated 15mm model I haven't put in any gabions nor do my gun ports open and close.

I also realised I haven't put in a gate or draw bridge. Place looks like a death trap.
Posted by Trebian at 11:45