I dropped a line to Mick at Leven Miniatures and told him I really needed some buildings, like, really quick so I could get them done for Newark. And some tents too. Top bloke. In the post first thing Monday, on my doorstep Tuesday morning. 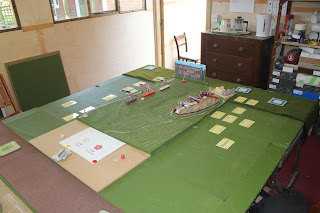 There's been lots to do in the last couple of days, including the check to see if the board will go in Phil's car (we often go to shows together and there's no point in taking two cars. If we're in the same car we arrive at the same time) and to do a final play test. 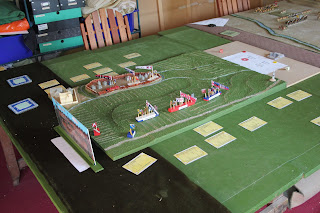 I've finished the "new" Northampton which now has a stand to hold it upright, and I breathed a sign of relief when it was clear the "abbey" buildings would fit in the corner, as would the tents in the camp. 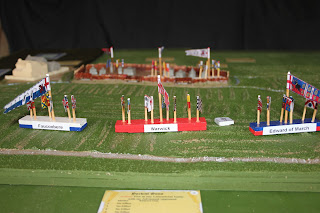 The camp just needs the interior done at this point, but the view down the hill looks just how I wanted it too in my head. 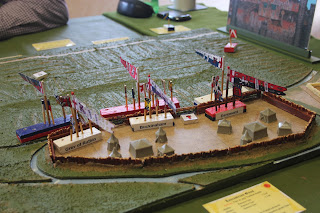 Phil attacked with the Yorkists. He opened up with his artillery and blew some lumps off me, so it didn't look good. He then had me excommunicated and went in for the kill.

Alas his attacks with hand to hand weapons were less successful than with gunpowder, and Grey of Ruthin decided to stay put. Oh dear. 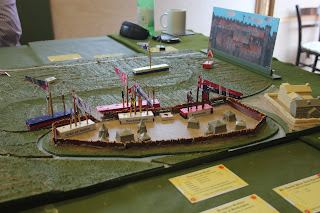 In a hard fought contest on the Lancastrian right Fauconberg was eventually forced to retire (first time in the game) and Warwick and Edward were unable to fight their way in before their army lost hope and called for Quarter, which was given. The result of this was that Warwick and Fauconberg got the chop, although Edward, Coppini and Bourchier were spared.

Under the game results system this gave the following outcome:

"Major Lancastrian victory. Buckingham faction tighten hold on Government. Fortified camp tactics totally vindicated. Such battles dominate the remaining battles of the Wars of the Roses, if any."

This was quite a relief as the Lancastrians hadn't made much headway in a lot of the games, the best results being not losing as badly as their historical counterparts had done.

It was then back to the painting desk to finish the abbey (thanks to Phil for working out the best configuration for the buildings). 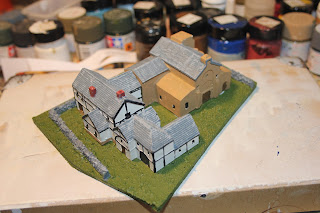 The final result has an abbey/convent building in Northamptonshire ironstone and half timbering for the rest of the cloister buildings. The buildings from Leven are very nice and not, in my mind, very expensive. Excellent value. 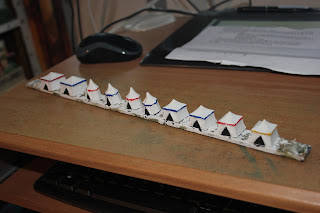 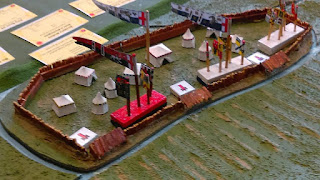 ...which sit quite nicely in the finished camp area. That now has a (removable) banner for Henry VI. 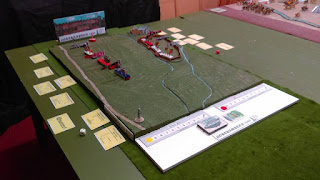 And finally for the day's work I had to cut down the spare board and paint it white. It now has the name plate and the morale trackers on it. Casualty tracking to be added later, - after Sunday, probably.

What next? Ah - a rules re-write and a banner each for Coppini and the Archbishop of Canterbury.