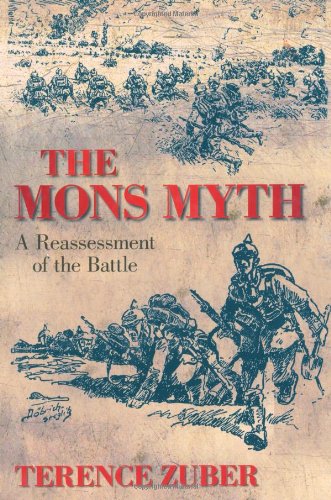 I'm a little bit behind the rest of the world here. I've just finished Terence Zuber's book "The Mons Myth" that I acquired at COW this year.

When it was published in 2010 it caused quite a stir as its central thesis was that the BEF at Mons & Le Cateau were comprehensibly beaten by German troops who were better trained and better lead at all levels, (except at 1st Army Level where Kluck & Kuhl miss a clear and obvious opportunity to destroy the BEF completely). It also asserted that the story of the Germans mistaking rapid rifle fire for MGs is a complete fabrication not supported by the evidence.

Zuber's basis for saying this is that he has looked at the German sources, - many more German sources than have been used in traditional "Anglophone" histories.


Zuber has the perfect qualifications for this type of work. He rose to the rank of Major in the US Army before taking a degree in history from Wurzburg University. He therefore not only speaks both English and German but has military experience and has a history qualification.

The amount of work that has gone into this is impressive. He has tracked down a large number of Imperial German Histories for the units involved and created a coherent narrative from them all. He has also had a good dip into the English language sources, - not just the Official History, but also regimental histories. From these he generally concludes that the narrative from the German sources is more comprehensive and reliable. I suppose we shouldn’t be surprised. The BEF was going backwards for most of the 1914 campaign in considerable confusion, not helped by having to liaise with a French Army that was doing likewise at the same time. Lots of equipment was lost along with records and reputations.

Zuber’s main conclusions are that the BEF was poorly lead at senior level, poorly trained and prepared for a European war and mostly unaware of what was going on around it and what the Germans were trying to do. I think many of us would agree that is fair. A reluctance to appear aggressive and upset relations with the Germans meant that the BEF never undertook manoeuvres on the Continent together with its French Allies before the outbreak of war. It had only developed a proper Staff in the previous decade and was still an army mostly intended and prepared for Colonial Warfare.

The more contentious claim is that the British ability to produce the “mad minute” of rifle fire had no tactical importance in European warfare and the Germans hardly noticed it, let alone mistake it for MG fire. Given this analysis the Battles of Mons & Le Cateau are re-evaluated as British defeats where the BEF is pushed about out of its positions by a technically superior German Army that suffers considerably fewer casualties despite attacking broadly speaking with equal numbers in most cases. German superiority in numbers arises as they could get more men to the point of action rather than have them spread out.

It’s a devastating analysis and a big kick to the British ego. He may be right, and I find a lot of it convincing. I'm not one of those who appear to worship the 1914 BEF in all its perfection. I find the citizen army of 1916 onwards much more interesting, so I'm receptive to this type of revisionism.  However he gets a bit too excited and his historical method starts to fall apart. In the event of any dispute between sources he sides with the German accounts. He denies the BEF shot down German troops attacking in mass as they were trained to fight in skirmish order. This may be true (and it must be borne in mind that training of German units was down to the commanding officer so may differ from unit to unit) but there are several independent eye witness accounts that say virtually the same thing. You can’t just ignore them without explaining them. He is also scathing about where units are, - units can’t be where some sources say they are because it fits his story to have them elsewhere. Of course the same could be said the other way round. He also likes to take potshots at the anglophone sources and takes many swipes at the Osprey book on Mons. He needs to be taken aside and told that it's an Osprey. It isn't proper history.

However, this isn’t my biggest problem with the book. In his desperate attempt to produce a more balanced British/German account he topples over at times into uncomfortable views in respect of German policy and the actions of German troops.

I have to put my hand up here and say a couple of things. It is my view that the blame for the Great War falls disproportionately on the Kaiser’s Germany. They were the one power that could have stopped the whole thing (viz the “blank cheque” to Austria-Hungary). They reacted to a crisis in the East by attacking in the West, and invaded a neutral country. If Germany had not invaded Belgium Britain would have not joined the War.

However Germany, in Zuber’s view, is fighting a defensive war. His misuse of the timings of the various mobilizations in support of this view is criminal from a serious historian.

His keenness to praise the German army becomes distinctly unpleasant in handling what happened in Belgium. Now, just to re-iterate, Belgium was neutral and her neutrality was guaranteed by the major powers (including Prussia). Belgium was invaded by Germany with no causus belli at all except that the German army wanted to march through it. Germany’s beef was with the Franco-Russian entente. That’s the only justification for attacking in the West. Belgium had  made clear it was neutral and set its defences and deployments and undertook any exercises to deal with threats from both Germany and France/Britain.


So, having invaded Belgium German troops found themselves attacked by locals, the “francs tireurs”. Their reaction was out of proportion to the damage inflicted, and whilst it may have been justified against people not in uniform (depending on the Hague Conventions) the Civil Guard were uniformed and entitled to bear arms. German troops therefore effectively shot prisoners of war. They also committed other atrocities, - the “rape of Belgium” is not made up – and throughout the war exported Belgians as slave labour to Germany as well as asset stripped the country. That’s a neutral country, remember.

If he tried to do the same whitewash job on the Second World War this would be completely beyond the pale.

So, would I recommend this book? Well, only if you know the subject and can identify when it gets ahead of itself. And whilst it has some valuable information on German training methods and what happened in the various battles it is very poorly let down by some of the most useless maps you can imagine.

I'm glad I didn't pay full price for it, and I shall be more circumspect in using his book on the Alsace/Lorraine campaign in future. I suspect that isn't entirely even handed either.
Posted by Trebian at 17:56