A Trip to the Seaside

Not all visits to the seaside involve the beach or a stroll along the prom. Not all locations in Great Britain that are by the sea can be classed as “seaside”. Miss Trebian lives in a place that falls into that category as she teaches in a secondary school on the south coast near to Portsmouth.

With the launch of the new Mary Rose exhibition it was clearly time to go and visit her. Oh, and she was back from her trip to Canada where she met her other half’s family, so we needed to catch up on that too. He’s never done the Portsmouth Naval Dockyard either, so it seemed to be a good idea to do the visit before the schools started back.

We’ve done the Dockyard twice when the children were smaller and it is an excellent day out with lots to see. Plus if you buy an all attractions ticket you can go back on other days for up to 12 months. Bargain if you live in the area. If you put to one side that it’s mostly about killing people it’s a great day out.

The whole area doesn’t just have Mary Rose, Victory and Warrior but a WW1 corvette, other small boats, the submarine museum and the delightful “Explosion” – the Museum of Naval Firepower across the bay in Gosport. This includes all manner of weapons (Nordenfeldts, Gatlings, Whitehead Torpedoes, Nuclear Bombs) as well as a good exhibit about what it was like to work in an explosives factory. You can get to this by the Waterbus from the main site, next to Warrior. 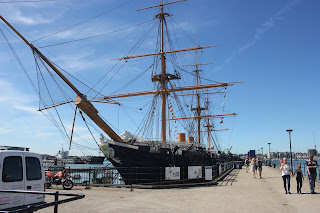 I really like Warrior. The restoration work on her is stunning, and hasn’t skimped, unless you count the Armstrongs on the gun deck being fibreglass and not iron. She’s also easier to clamber round than Victory because the headroom has been designed for normal people to stand upright pretty much anywhere. I also have some lovely photographs from our very first trip of our children aged 1 and 3 at the time in the hammocks and sitting having a packed lunch at one of the mess tables on the gun deck. I also like that Warrior was the ultimate deterrent. Most powerful ship of her time; never fired a shot in anger. That’s what you want from a deterrent.

As she is closest to the entrance we went on her first. The timing was good as there was a small arms demonstration about to start on the half deck, given by the Warrior’s expert in this kind of thing. He's a Scottish chap who doesn't think much of Chelsea fans. What's not to like? 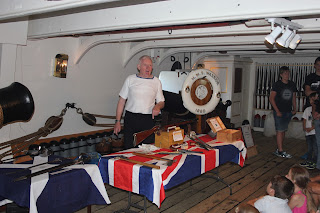 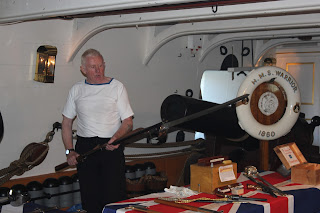 An excellent presentation where I learnt some things I didn’t know (although I’m sure all of you were aware of the Navy Colt’s tendency to discharge all loaded barrels simultaneously if there was any stray gunpowder about). And afterwards the kiddies can line up and get their picture taken with the authentic sidearm of their choice. 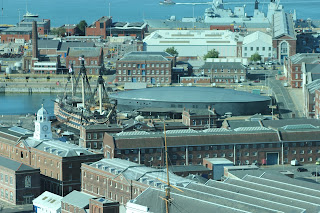 The new Mary Rose exhibition hall is at the other end of the dockyard.  That's it behind Victory. The Grey Building that looks like the Seattle Astrodome or whatever. That makes it sound like a long way, but it isn’t. It’s a pleasant stroll in the late summer sunshine. (This picture was taken from up the Spinnaker Tower later on in the day)

When we first saw the Mary Rose it was in 1990, and she was still being sprayed so you had to wear ponchos and it was cold. Next time she was in 1998 and she was being dried out. Now she is fully dried and preserved and up on her keel properly. My oh my have they done a good job on this exhibition. 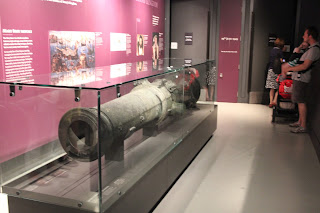 You still have the display halls for the artefacts, which are well laid out and lit, with informative text and the odd bit of interactivity for the little 'uns. 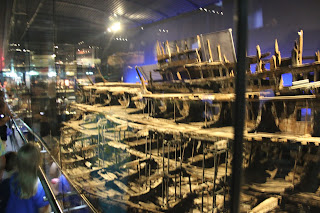 The remains of the hull are now clean and dry, and restored to the vertical axis. Resplendent in its own display hall with three levels it gives you the chance to see a cut away model of a genuine Tudor warship. 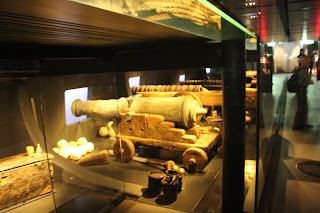 On the other side of the visitor walkways they've put guns and artefacts opposite where they would have been on the ship. Due to the mirror effect of the glass panels you can almost see them in situ. 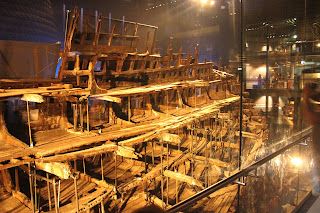 From time to time they project AV onto the inside of the hull, showing how the bits of the ship were used. It is brilliantly done.

The exhibition has cost several millions and it is money well spent. It is well laid out, beautifully presented and explains the subject really well. It is a model of how to do this sort of thing. I quite liked it. A lot. 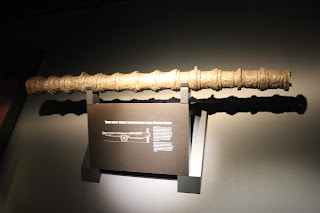 Finally, this is the gun they found that proved they'd found the site. So, it isn't all flashing lights and fun. It's a genuine museum too.

And the restaurant wasn't too expensive either.