Is Nostalgia what it used to be?

I got given a copy of this recently. An interesting choice. I know both Peter and Andy through Wargame Developments. Andy Callan is an inventive and imaginative writer of wargame rules. Peter Dennis is one of the best illustrators of his type working today.

I'm not sure who the book is aimed at. Peter's pictures are beautiful and he has really thought through how you would go about making everything in paper, -all the troop types, trees, buildings and so on. Modern printers and scanners mean that you can run these things off in your own home at a reasonable cost.

Of course, if you already have a large collection of 15mm ECW figures (as I do) it begs the question of why you would replace them with paper. These are 28mm in size so they'll take up storage space although they won't weigh very much. Just don't use them in a high wind.

Their construction is a bit fiddly and you need small dress making scissors to cut them out but it's probably still quicker than painting the figures. Anyhow, for me as they have no other resonances such as making paper soldiers as a child, I think I would file them under curiosities and move on.

Which brings us to the Andy Callan fast play ECW rules, the other part of the publication

I have a suspicion that I have played these before at a COW, back in the 1980s or 90s. As my figures are based up in a way that is easily transferable to the rule set it seemed like a good idea to try them out. Phil was about so he came over and commanded the Parliamentarians. 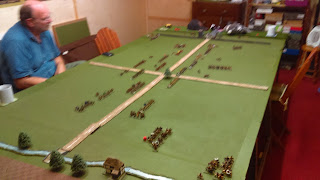 The rules do allow you to handle a lot of troops on a big table in a reasonable period of time. My recollection is that they were a breath of fresh air when first introduced. Protracted melees were a thing of the past. Meticulous record keeping was gone. Armies mostly did what armies did and it was all clear and unambiguous.

The rules are simple, so there is a need to fill in a few of the blanks when odd things happen in the game. Disappointingly the layout in the book isn't brilliant and the formatting seems to have some random carriage returns in there in places. There's also a difference between artillery range for medium guns in the rules and on the QRS.

The game clipped along at a fair old rate. There's quite a few dice to roll at times so extreme results can and did happen. Jaw droppingly so. Somethings aren't clear (multi unit combat, for example) but nothing that you couldn't deal with if running an umpired game or there's give and take between the players.

In truth, however, I can't see why I would use them more often. They really aren't doing anything new and they do feel like a set of rules from 20 years ago or more. I've got rules that do this sort of thing better and in some cases even quicker.

Which is a shame really, although it did pass an evening  quite pleasantly.