What a bunch of Guise-ers (part 2)

Due to a full calendar for both me & Phil next week I ran through the last few moves of the Battle of Guise this afternoon whilst the rain thrashed down. 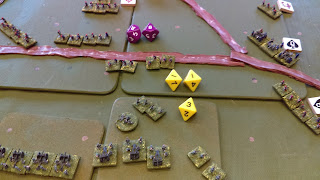 The French started with an attack on the forward elements of X Active Corps, but were thrown back with losses. 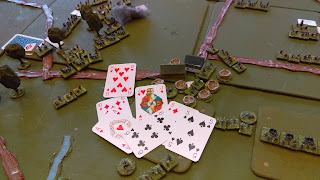 Next up the French counter attacked Sains, which the Germans had seized as a bit of a surprise. The way firing at troops in closed terrain works is for hit markers to be placed (the shell holes). When an assault goes in you draw a card per hit marker with reds indicating actual hits, blacks misses. The artillery as you can see was very effective and the occupying brigade was wiped out, allowing the French assault to be a walk over. 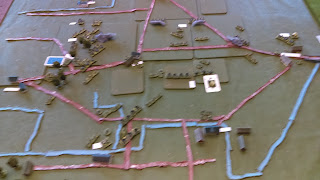 This picture's a bit fuzzy, - I was using my camera phone not my usual SLR. The reverses in the centre were compounded as X Active Corps became exhausted. At the bottom of the picture a French brigade from III Corps has occupied Guise.

Garde Corps was unable to get to grips with its French opponents, and the issues with X Active Corps were starting to expose its rear. 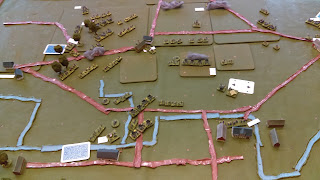 Further attacks in the centre threw X Active Corps off the plateau and overran their howitzers. Garde Corps took a bit of a pounding from French guns firing down from the plateau. 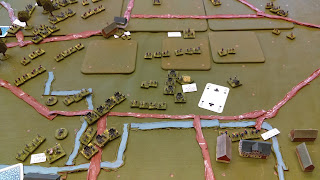 In the final turn French X corps became exhausted, but elsewhere the German position had completely collapsed and they were falling back behind the Oise. The drive on Paris had halted, but the pressure on the BEF had not been relieved as the Germans drew the full attention of the equivalent of 4 French corps. So a bit of a draw on victory conditions although a complete reverse for the Germans.

It is difficult to see how to fashion a winning German position from this scenario. However, looking at the map I see I missed a bridge across the Oise in the set up which would have enabled me to get Garde Corps across the river much more quickly and on much broader a front, bringing my superior artillery in to operation earlier on. One of my issues was the bottle neck trying to get my guns over the river.

The French were also very fortunate in the use of independent commands. They very rarely drew a club which prevents them moving, hence the big out flanking move that got the brigade into Guise.

Having said that I still have a great deal of interest in using Op14 further, although I need to make sure I get to know the rules a lot better. There aren't many of them but they do have quite a few nuances and you need to keep on top of them for the game to work fully.