Well, not just a day. The whole weekend.

Yes, it's that time of the year again for the annual trip to Derby World Wargames at Castle Donington. As trailed on this blog I was there with Phil & Chris on both days, promoting the Northampton Battlefields Society, the Battlefields Trust & the Society of Ancients.

Mostly I was there to get people to play my totally excellent "Northampton 1460" game. 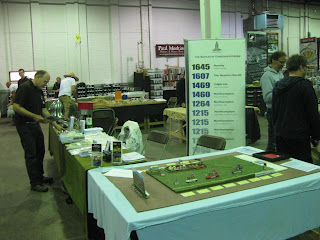 We had quite a good spot, on a walkway but surrounded by traders. We had Baccus behind us and Essex opposite, for example. 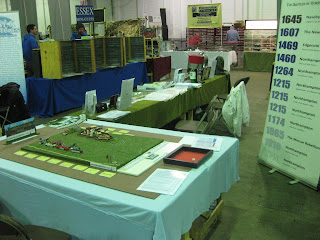 We snaffled an extra table to give us our favoured layout of game at one end and promotional materials behind. 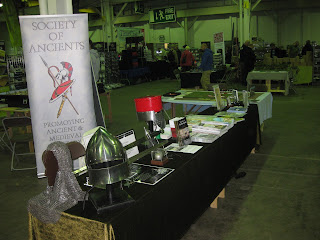 Confusingly all this kit is Battlefields Society display items, not Society of Ancients. 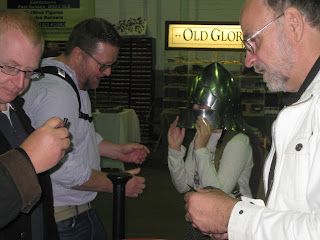 Everyone likes to try it out from time to time. Although not the chain mail coif which is heavy and oily and really awkward to put on a display head, let alone your own.

I only got to play one other game all weekend as we were really busy doing Our Game. I sat down with Baccus and ran through their ECW-using-Bolt-Action-style-dice-drawing-from-a-bag game.

Whilst it's a work in progress it was a quick enough system and was quite fun. The fun was aided by me inflicting a crushing defeat on my opponent through brilliant tactics*. 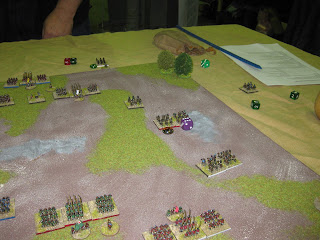 My right flank cavalry have just routed one Parliamentarian cavalry unit, and I'm lining up to do the same on the second. 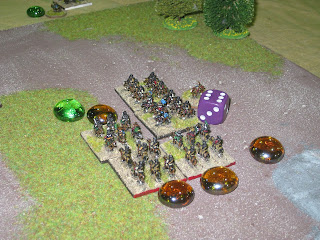 The die is drawn to indicate which side is moving. The number tells you what it's doing (6=charging) the blobs are hit markers. The first game design point we came up against was that the Royalist dice had rounded edges and the Parliamentarian dice square ones, so you could tell what you were drawing from the bag. They solved this after our game by buying new dice. The other issue was with melee combat. The way the melee worked meant that if a unit receiving a charge didn't break on the initial contact it then effectively got two hacks back before the chargers rolled again, meaning they were likely to break. An interesting mechanism, but probably not as intended for this game.

So, the main business of the weekend. Could we get lots of people to play the Northampton game and be completely ignored in the best participation game award category?** 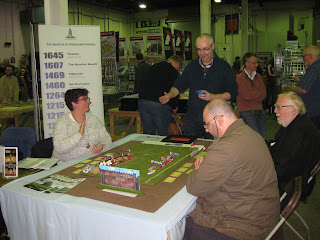 Well, we played it 18 times in two days, 11 Saturday and 7 Sunday. The results broadly favoured the Yorkists as you can see from the table:

Before you decide the game is biased or broken or favours the Yorkists just reflect that an historic result is a +5 to the Yorkists. What that means is that throughout the weekend the Lancastrains normally beat history.

It's probably best to play the game twice and swap sides, as the couple in the above picture did. They both won with the Yorkists, him by +4, her by +3. There was much gloating, clearly the secret of a happy marriage.

Another good show, although my photo record is obviously a bit weak. Picked up some more Great War artillery from Baccus and more bases from Warbases plus a book from Dave L. My purchases were down having been to Partizan barely a month earlier. I saw a couple of Ospreys I was tempted by, but they were at full price. As someone remarked to me "I can't recall when I last paid the cover price for an Osprey". How true.

We had a lot of good passing traffic on the stand and the chance to talk about Northampton, game design and why 28mm figures might not be the answer for this battle was rewarding.

I also noted a couple of slight glitches in the game system which I need to work on. I think I'll be doubling the victory points to give a wider spread of results too.