I had a visitor last week. Richard Brooks came to give his "William the Marshal" talk to the Northamptonshire Battlefields Society and before this we were able to squeeze in a game in Shedquarters.

I thought it was too good a chance to miss to have a go at some Op14. I therefore scurried round to find a scenario that Richard hadn't played that I could do with my 1914 forces. Due to recently buying the Osprey on the Battle of the Marne I thought that an afternoon two player game could be made out of Maud'huy's attempt to turn Von Bulow's right flank at Marchais-en-Brie on 8th September 1914.

The map in the Osprey is helpful but doesn't show the whole action and I couldn't get all the info from my other books (my Marne Battlefield Guide doesn't cover this area). There's also a definite typo in the Osprey in respect of the units involved. Bigger maps show the position the day before and after but not exactly where everyone was at the time. I've therefore had to guess at what's to the east of Montmirail. The German OOB and locations don't make sense either, so I've played a bit fast and loose with them. The map below is what I ended up with. 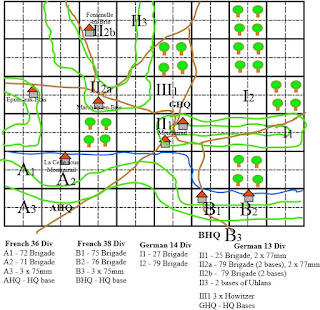 The Germans also had a tethered observation balloon in the wood to the north of Montmirail. The game starts at 10am and goes through until 8pm. You'll see I've had to split a German brigade between Marchais and Fontenelle. After playing the game I should probably have strung them out even thinner at a base per square and suspended the one base unit removal rule. 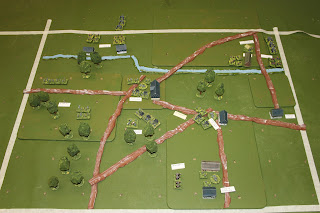 Here's what it looked like when I set it up, from behind the German position. I took the Germans, as they were on the defensive so that Richard had the most to do. 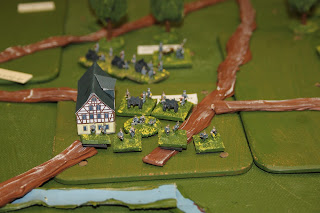 Here's a close up of the Germans defending Montmirail. This was a pivotal point as it was higher than the surrounding area, and dominated the battlefield. The Germans seem to expect it to have been the subject of serious attack as they defended it more heavily and put more guns there. If I was to play this again I would realign the howitzers you can see behind the town and make them fire more in its defence. 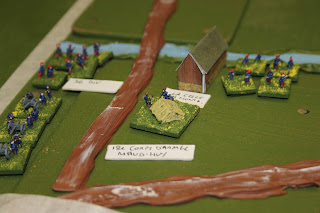 The French start by crossing the Petit Morin in the area of La Celle. That's the HQ unit with the tent, not the mobile brothel as my opponent remarked, unkindly. 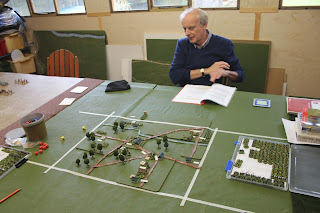 Richard took hold of the rules early on. He's being playing games in the Middle East with appropriate  modifications, so he was in need of a refresher. I find that. It's embarrassing when you drag out an old set of your own rules and can't remember them. 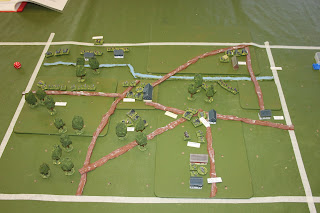 The French left where they cross the river is a trifle exposed, so once across the French dive into Courmant Wood in front of Marchais asap. This is about what happened historically. The Soixante-Quinzes deploy to provide fire support. On the other flank the French start to draw a succession of diamonds which stops them moving through obstacles, and firing and missing with the Soixante-Quinzes. In practice I think this is not a problem. Essentially this attack has to pin the Germans in position whilst 71 & 72 brigades turn the German right flank. 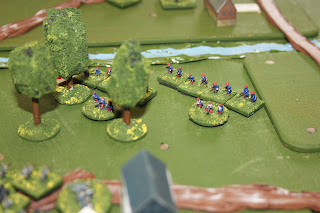 The German position in Marchais has guns supporting it, so the French get pinned down in the woods and have to deploy (see the MGs denoting non-moving status). 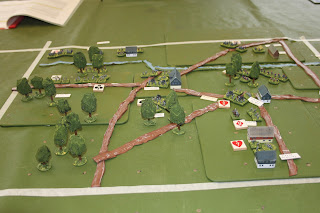 A general view of the battlefield. The French have generally stalled, fearful of breaking across the open area to attack the weaker points of German defence. 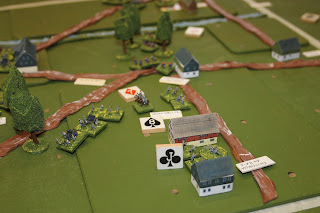 A ferocious French assault storms into Marchais-en-Brie and throws the Germans out with heavy casualties. Reinforcements will need to be pulled in from Fontenelle to enable a counter attack. 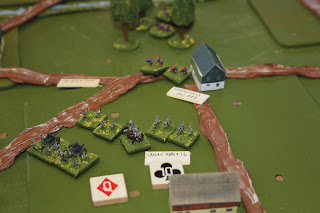 The gap in the line is plugged with dismounted Uhlans. I think this is a mistake in the scenario, - the Uhlans should be too weak to do this. 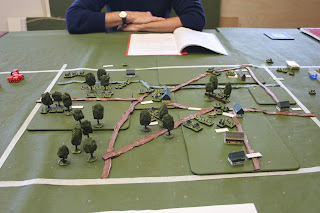 The French really struggled to advance their right, which meant I could concentrate my howitzers on their left. This brought their advance to a halt before they could turn the position. They hold Marchais, but that Division is nearly exhausted, (it is testing each turn) and so can't be relied upon to press any further.

The Germans are therefore able to slip away in the night, as they did historically.

With the tweaks mentioned above this is a nice little scenario, that doesn't out stay its welcome. I learnt quite a bit from playing the game with the author, which will inform my future games. And Richard said nice things about my toys. So, satisfactory all round.
Posted by Trebian at 12:49