...or PBI Shedquarters. Yes, after a break of several years my XIVth Army chaps are out on the table again. Well, three and a half years about. At that time I remarked that I'd just finished a battery of 25pdrs and I really should get round to using them soon. Interesting definition of soon.

The 25pdr is the gun of the Burma campaign. Versatile and jeep transportable it went everywhere and delivered much needed firepower often at quite close range. 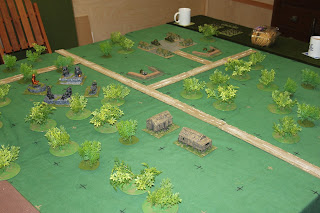 Rather than play PBI straight I set up a scenario. Honestly I've hated EVERY pre-game PBI sequence, and the whole reinforcement process which means you can win without putting anything on the table is just irritating. I've got toys, I'm going to use them. 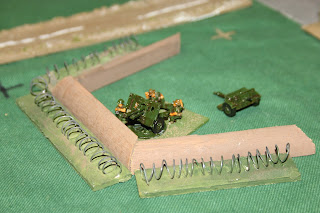 Here we have a British base in the jungle with a radio station (see later photo) defended by a West African company, a couple of Rajput Grants and some emplaced 25pdrs. 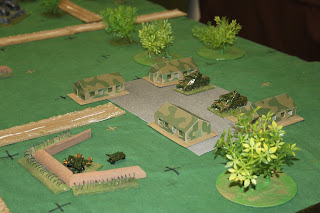 I'm using bits of my Matchbox 1:72nd airfield, that looks just right in this scale. 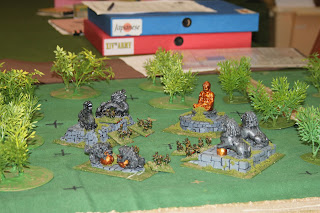 The position includes the remains of an abandoned Buddhist temple in the jungle. 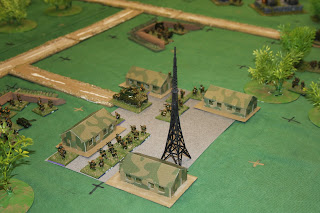 Look! I promised a radio mast. It's one of Phil's. I like it a lot. 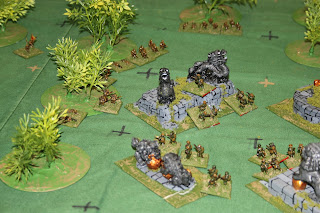 We had a lot of jungle and we play a house rule that means it is quicker to move through connected bits of jungle in place of the not completely satisfactory "sneak movement" rule in basic PBI. Suddenly lots of Japanese appeared close up to the temple, and a serious firefight broke out. Phil, as the Japanese, rolled a lot of sixes, but Will saw him off by refusing to roll any ones. 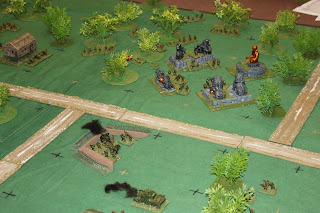 The defenders made use of their armour and guns to keep the attackers at a distance. 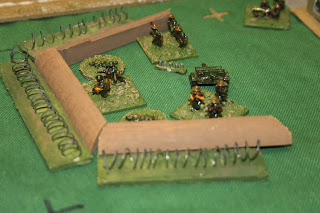 However the Japanese had a medium mortar battery and having found a clearing to deploy it in plastered one of the gun positions and knocked out the 25pdr. 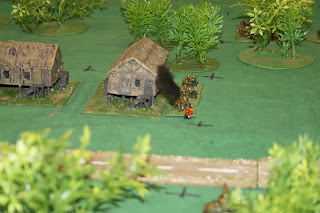 In the centre the other howitzer managed to hit the Japanese infantry guns massed on the edge of the village. 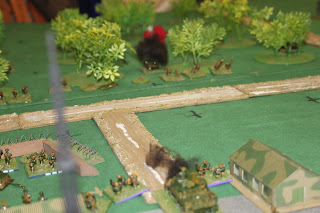 One of the attacking tankettes also got the worst of an exchange with a Grant. 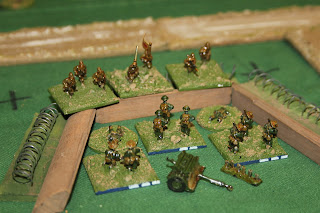 Although Will had reinforced his stricken gun emplacement Phil was able to launch a bayonet charge. At this point Phil, at my prompting, was bemoaning the problem with the square by square activation that makes it difficult to launch massed bayonet charges from multiple locations. 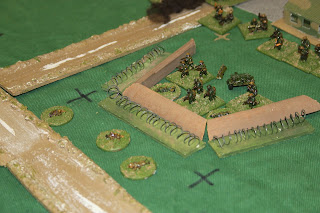 The brief but fierce melee rendered all of the attackers dead. The run of sixes at the start of the game had now deserted Phil and he suffered accordingly.

We broke the game at that point as it was getting late. I had under estimated the amount of time we would need for the amount of figures on the table, and Phil hadn't even brought on his reserve platoon yet.

Any how, I managed to blood the 25pdrs at last which was great. I find PBI an infuriating game. I love it and it has a more believable feel than most if not all other low level WW2 games. The motivation/activation sequence gives the players a lot to think about and rewards good decision making. The amount of dice can make it very frustrating (says the man who loves AMW!) as plans can go amiss for no reason other than rank bad luck.

We were using the last but one version of PBI with our own amendments. I was a bigger fan of PBI2, the version before that, but this version fixes some of the issues with them, so that's why we use them. I tried to read the latest version and knowing that Martin has a rigorous playtest process with players that it will be delivering what the PBI die-hards want. However it isn't doing anything extra that I want.

Perhaps it is time for me to write my own.
Posted by Trebian at 14:34