Returning from my trip to Iran it is clear that my first game back must have a Persian theme. A quick perusal of my source materials indicates that Neo-Assyrian allied troops make a fair proxy for Lydian infantry and Macedonians & Greeks can fill in for the rest.

So I decided to do a Persian/Lydian match up using Armati 2, taking the Lydian list from the Warfloot site. Having sorted the figures out I had a half hour or so to assemble another of my Iranian models whilst waiting for Phil to arrive. 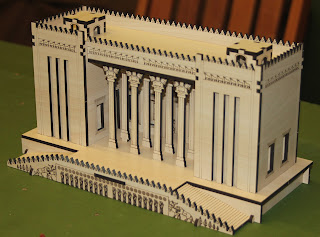 This one is the Tachara Palace at Persepolis, It's a 1:150 scale model, so slightly less over powering for the 20mm figures than the Cyrus tomb. 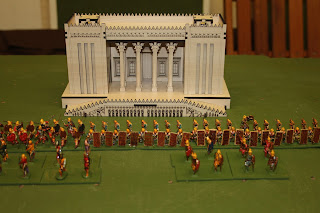 Here it is, protected by a lot of Persian infantry. 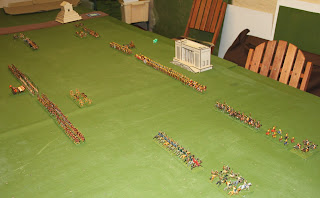 When Phil arrived he took the Persians, and I took the Lydians. No camels, so sorry to Herodotus. I'm pushing forward with my cavalry on both wings as I have a slight advantage in quality on my left wing and in numbers on my right. 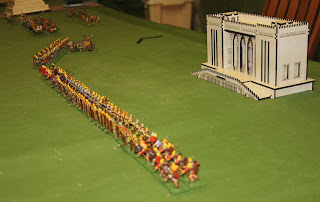 To cover the threat to his right, Phil dog legs his line, turning the Immortals to provide missile support to his right wing.

I have Phil's light troops on his right going backwards, and my Light Cavalry are turning his flank. Miraculously not receiving any missile casualties. Unlike my Heavy Cavalry, which has taken hits and is failing to make a dent on their opponents. 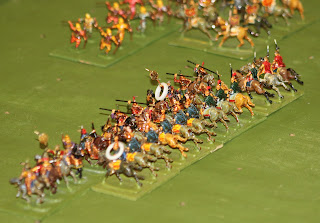 On my right the more evenly matched heavies are trading hits. In the background my light cavalry is chasing off Phil's skirmishers. 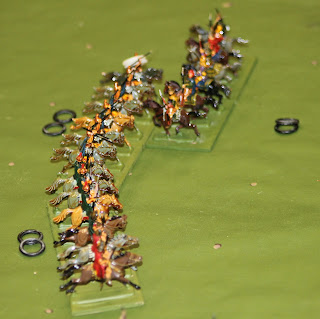 A couple of rounds of combat on this flank and I break a unit. Question is whether I can turn my cavalry in quick enough to finish off Phil on this flank before he evens up the score. 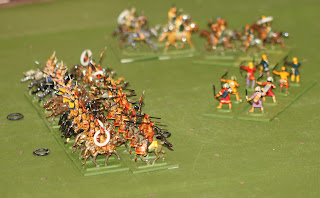 The other wing is going more slowly, and I'm losing where I should be winning. Curses. 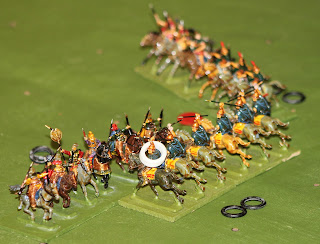 Yep. Going to lose it on my right as well. The unit has to take one more hit and then it breaks. The cavalry literally aren't going to get there in time. 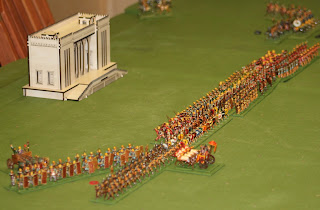 The infantry lines collide. I've done reasonably well surviving the hail of arrows from the Immortals and Sparabara, but I suffer on quality, except for my hoplites. This could be close. 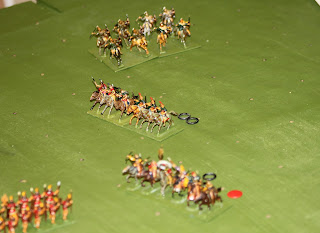 Having broken my other cavalry unit on my right we're both now racing to try and roll up the opposing infantry. My light cavalry has seen off the skirmishers. 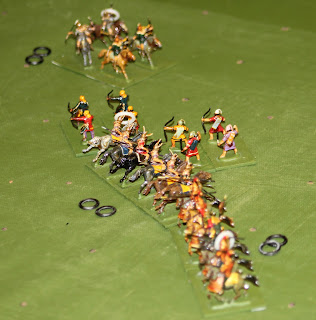 On the left the we're down to one unit a piece, but I lined mine up wrong. Phil wins the initiative and catches me in the flank. 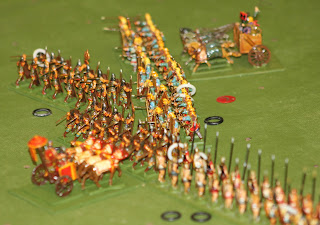 The infantry combat is getting a bit tense.

We've both caught our opponent's open flank. The key issue is if I can get my lights involved. It's looking unlikely. 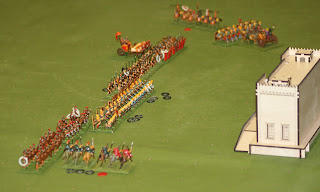 End of game. I hit my breakpoint first and Phil wins. We run through to the end of the turn, and end up breaking six units each, but still a victory for the Persians.

Luckily for me the trip to Iran hasn't opened up the desire to start new armies as I own a couple of them already from that region. I need to look more closely at the non-Greek conflicts that Cyrus and his successors got involved in, so perhaps some shenanigans out on the Indian border in the next few months. Who knows.