Now this was a surprise. It is on a list of sites UNESCO is thinking about listing as a world heritage asset. What do you think?

The Izad Khast citadel wasn't on our itinerary, although a quick stop at the renovated caravanserai that bears the same name was. We were on a long journey by coach between Shiraz and Esfahan, I think, and it was getting towards evening when the coach pulled over and we were all asked to get out.

And there before us was the biggest mud-brick building I've ever seen. 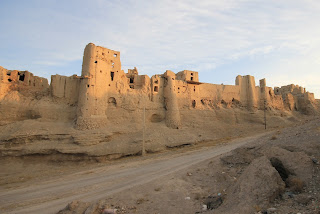 Honestly, it's just enormous. It's called a citadel but it's more of a fortified village or refuge. It dates from Sassanid times and was used until the early 19th century, when the Qajar dynasty cleared everyone out and moved them to a more modern village that was easier to police. So that's a period of occupation of over 1500 years where it has grown organically but still within the fortifiable site on the top of the hill. 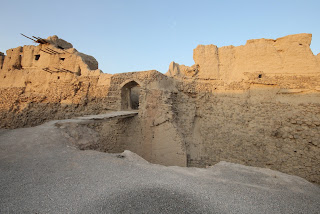 The entrance is protected by a drawbridge over a ditch, and access is further restricted by a very small doorway. (This is up on the extreme right of the top photgraph and just round the corner). The site isn't always open as it depends on whether the guy with the key is about. 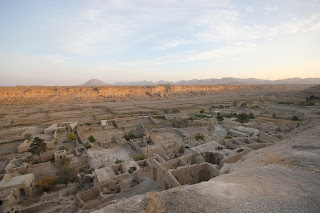 This is the view with the drawbridge behind you, overlooking the abandoned village. 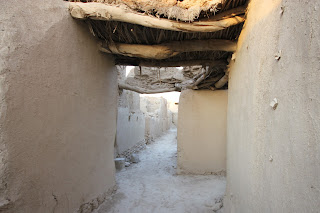 The alley ways between the buildings in the citadel are narrow and winding with no clear plan or layout. 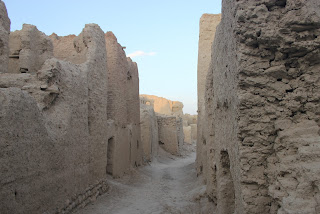 The buildings are dilapidated and some of the alleys lose their shape due to eroded mud from the bricks. No work has been done to repair or maintain it since it was abandoned. 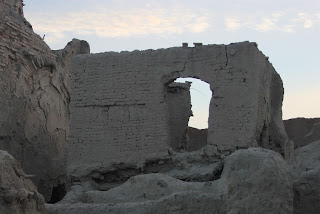 The site had a Zoroastrian temple - which is square - that was converted into a mosque, which would have had a dome. This has now fallen in. 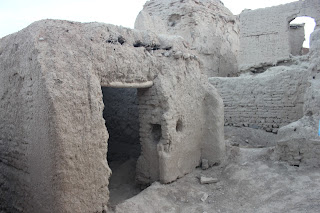 There are no signs telling you what any of this is, and the local guide was a bit vague. No archaeological work has been done here. After all, it's only on the "tentative" list at UNESCO. 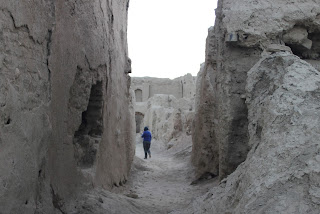 Late in the evening, with the late sunlight on it, I can say it was another wonderful, haunting, magical sight (and site). Just wandering through the ruined walkways and buildings you could feel the hundreds of years of history wrapping themselves round you. 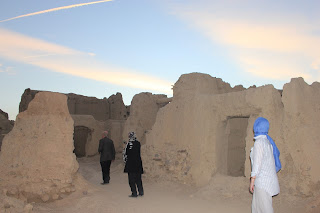 And the light was blue, and clear and golden all at once. You didn't want to leave. 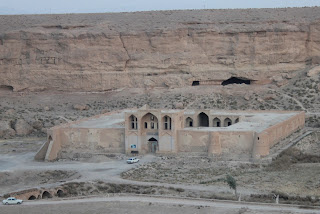 In fact, we were there so long it got dark and we never went into the caravanserai (pictured above, taken from the citadel) but I don't think anyone minded.