Not that One again

There is a line in King Lear when the Earl of Kent shouts "Thou whoreson zed, thou unnecessary letter!". The Bard, it seems, fets free to train his guns on anyone or anything, even a letter of the alphabet. 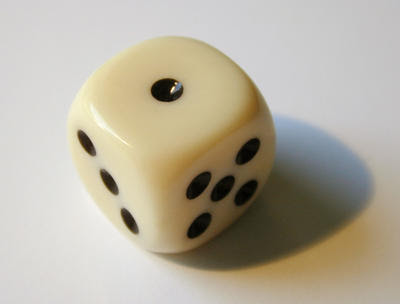 Sometimes that's how I feel about the number 1. You know, when the dice rolls over and your inner monologue is going "Anything but a 1, anything but a 1" and there it is. The single dot of death, winking at you from the centre of the cube's uppermost face.

Of course it isn't always bad. There are a few rules sets where rolling low is good. Martin Goddard at Peter Pig purposely has low numbers being good in his morale tests, just to provide encouragement to those of us who feel we are carrying more than our fair share of the low end of the number spectrum as the universe contrives to provide an even distribution.

However even Martin was noted for giving the tactical advice "Roll lots of sixes". So not a massive fan of the number 1 either.

And there it was again last night, popping up with alarming regularity during a game of big battle DBA (which will be covered in a later blog). Whether frustrating an army advance by making an appearance as a PIP roll, or ensuring that a unit of knights dies unexpectedly, there was that little single dot spreading misery across the table.

What is to be done with the wretched thing?

Seriously, what is to be done about it? Can we go on like this?

I mean back in the 1970s we all went crazy for average dice which did a way with the 1 completely, spreading the dislike to the number 2, which hardly seems fair. I mean, what has the number 2 ever done, except for being twice 1?

That's sort of hiding from the problem though. If we're allocating probabilities to events then we have to accept the 1, in the same way we must glory in the 6. It occurred to us last night that perhaps we should be looking at some form of compensation for the pain and heart ache inflicted.

For example, every time you roll a 1 you could get a fail marker. Once you have two of them you could be allowed to re-roll a die on a later turn (not immediately, - that would be silly). Or perhaps you cold use a fail marker to add a one to a die roll either before or after you make it. Capped out at a maximum of one add per roll, and not to exceed a six, of course. Otherwise madness would rain.

Or maybe you just get first dibs in the box of biscuits the next time it goes around.

"Thou whoreson one, thou irritating number!", as the more literate amongst us might say.

Email ThisBlogThis!Share to TwitterShare to FacebookShare to Pinterest
Labels: wargaming