Before I get to the proper pictures, here's a little something I picked up on my recent holiday.

Some of you may remember this post: Ancient Chinese Finger Torture. It tells of my purchase and assembly of a "3D Wooden Puzzle" I bought in China of a walled house and garden. Ever a sucker for things like this, and time being a great healer, I was delighted to see that 3D Puzzles of significant landmarks are a big thing in Iran. Yes, Iran. The Islamic Republic. That place where all women are covered in black sheets and you get thrown into jail for even thinking about having a Gin and Tonic. Or perhaps not. Mrs T & I are just back from our visit to said country, and it isn't exactly like that. More of that perhaps at a later date.

So there we were at Persepolis, that jewel of the ancient world burned down by the barbarian Alexander, and what should be on a counter of one of the gift shops but a number of 3D puzzle models, all of which would grace a wargames table. I haven't built the one I bought there yet, but I saw more elsewhere, and who could resist a 1/75 scale of the tomb of Cyrus the Great for about £7? Certainly not me. 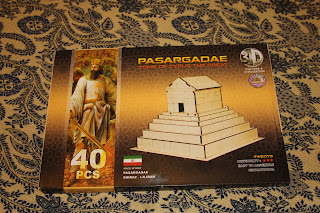 So, what do you get in the package? 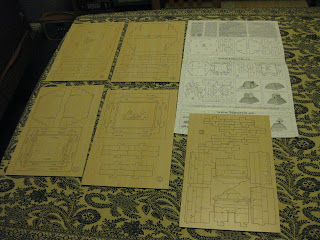 Well you get 5 sheets of veneered MDF and very clear instructions (numbers on the plan are in western numerals not arabic ones). They're also laser cut, rather than die cut as were the Chinese models. Always a good sign. The tomb is a step pyramid with a stone shed on the top. The stone is also the colour of the veneer, near enough, so this works really well. 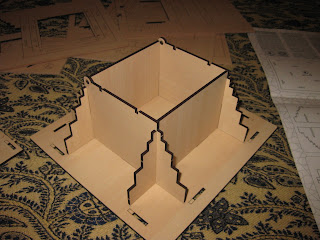 The core of the model is four interlocking panels that slot into the base. I might glue this later, so I can cut off the protruding locking pieces that make it seem to hover 5mm off the ground. 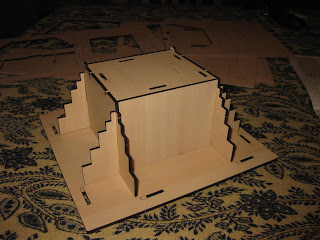 Curiously the top platform is actually secured by a simple hinge. Most odd. Perhaps I can use it as a dice box as well as a cool piece of scenery. 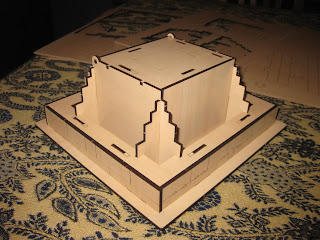 The steps are made up of a series of side panels, locked in place by flat sections. 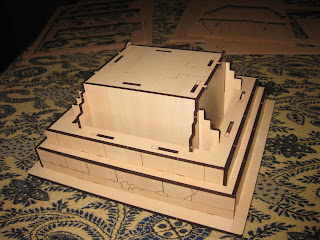 They fit together really slickly. No heated pressing of pieces That Just Won't Fit. No need for sand paper on this one. 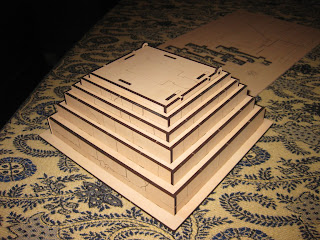 There's the step pyramid bit finished. Took about 15 minutes to this point, I think. 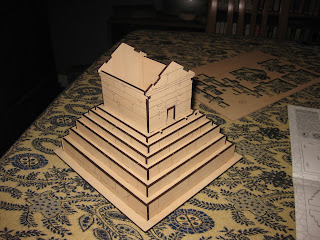 The walls of the tomb itself slot into place effortlessly. 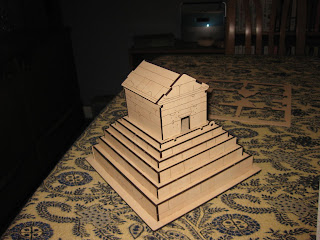 And the roof finishes it off. Only criticism would be that nothing locks the roof in place, so I may have to glue this too. 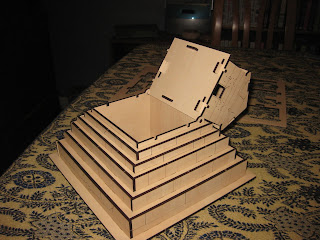 This was a joy to make, and it looks lovely. I have 3 other models in various scales. In terms of construction and finish they are superior to anything I have seen at shows in the UK. Only criticism of the production is that they may burn the wood a bit much with the laser. My hands were filthy when I finished.

Of course because it's Iran getting these models in the West might be troublesome. They have a website: www.3DPuzzle.co (yes, that's right, - just .co). I logged onto it and got Google Translate to work, except it couldn't translate the numbers, and I couldn't get anything into the basket either. Buying may not work anyway, due to sanctions.

We saw these quite a lot, once I'd noticed them. Here's a picture of a stand selling them in the basement of a mosque. I'm sure you'll agree it's quite a range. 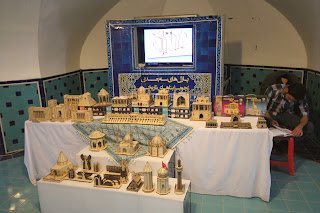 I keep wishing I'd taken up my entire luggage allowance with them.

When I get round to it I'll post some pictures of the real thing.
Posted by Trebian at 18:00