So, yes, we went to Iran and visited most of the important sites. We were only there for just over a week, so cramming in the high points of one of the oldest civilizations in the world was always going to be a challenge.

One of the main reasons I wanted to go was to see Persepolis, capital of the Achaemenid Empire before Alexander had it burnt down. Well, we got to see that, but also the Iranian National Museum which has some of the choicest pieces in it. Some of the other notable bits are in museums in Chicago, New York, London and other European capitals. 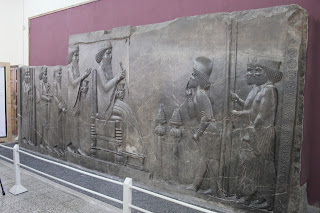 This relief was extracted from Persepolis in the 1930s. It's of either Darius I or Xerxes I (seated left) which makes the man standing behind him either Xerxes I or Artaxerxes I depending on who is father and who is son. All we know for certain is that one of them is Xerxes. In front of him is the chiliarch, accompanied by two Immortals. My pictures could be a bit better, but I was a little bit jet lagged at the time. 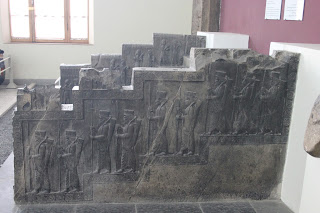 This is the main staircase from the Tripylon or main palace at Persepolis. Good clear reliefs of Persian infantry armed with both spear and bow. 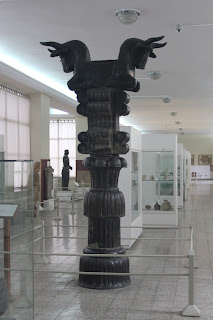 This is a small roof supporting column from an un-named room at Persepolis. The capital is in the form of a double headed bull, and a wooden beam would have gone across the top. A lot of the middle section of the column is missing, - whether because they couldn't find it or because it needed to be shorter to get in the room in the museum I can't say.

Persepolis itself is more in the south of Iran, near the city of Shiraz, so we had to take a flight there. It was a short coach ride from our hotel. 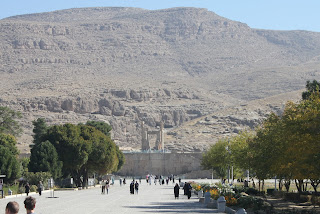 You approach the site down a long straight road, so you can see it in the distance. The whole thing was built on an enormous platform, raising it up from the plain against the back drop of the hills behind. It is a serious statement to the subject peoples who had to bring their tribute here. 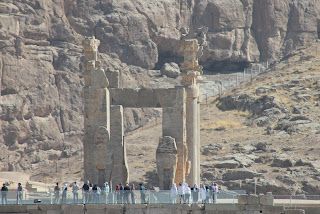 This is the main entrance, the Gate of All Peoples, - the subject of the model in the last post. You approach it up a relief-laden double staircase. 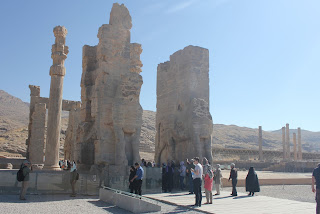 It has three door ways. The one you enter the site by, one immediately opposite for military units to pass through, and one to the right for visitors, that takes them into the Audience Palace.

It's a big site, and although we had a guide, I didn't have a map, nor did I have the layout in my head. This means I got a bit lost and my pictures are a bit haphazard. 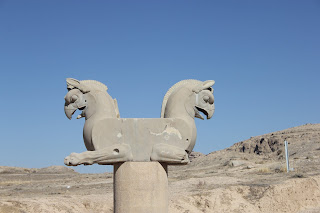 This is a Homa Bird double headed column capital. It's really big, so I should have some one standing next to it to give an idea of the scale. 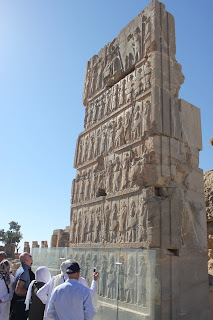 On the walls and staircases that remain relief carvings are the order of the day. They are everywhere. At the time the city was built and occupied these would all have been painted. 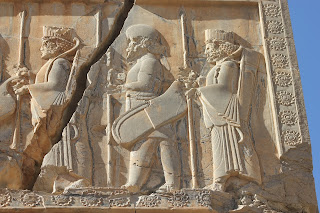 Lots of good detail of Persian and Median infantry. 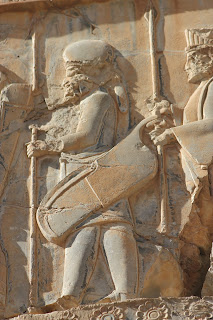 You can see where all those figure designs come from, - although the Immortals were a bit light on the wicker shields. 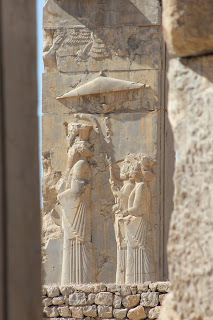 I like this one of Darius and his attendants. I don't know why he felt the need to use an umbrella in doors. The light out there is very bright and the colour of the stone very subtle. That's a way of saying the pictures aren't always as clear as I'd like. 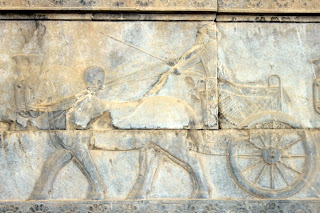 Having said that you can make out a lot of detail on this one of the Royal Chariot being driven by an attendant. The wheels clearly have some kind on grip on them, and the device for managing the reigns on the horses' backs are also clear, as is the strap at the back to help you mount the vehicle. The axle pins are in the shape of a woman, - the only female relief carving (other than a female lion) in the complex. 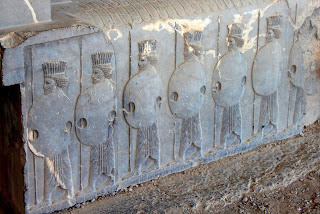 As I said, not many wicker shields, but lots of chaps with these. Most walls have a left and right set of reliefs, showing the groups of people from opposite sides. 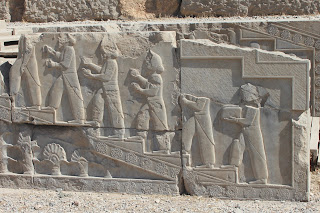 Quite like the Parthians bearing gifts as they climb a relief staircase on the side of an actual staircase. 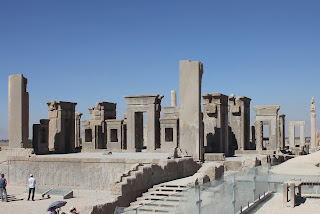 There is quite a bit of standing stonework about the site, and one restored building which has a museum in it. Didn't have the time to go in that as we lost an hour due to one of our party nearly going into a diabetic coma before we set out. 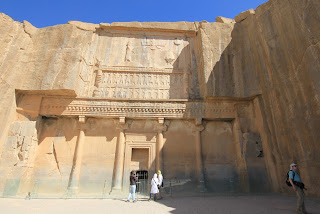 This is the tomb of one of the Artaxerxes, cut into the hillside overlooking the complex. You can just see it in the background of the top picture as well. 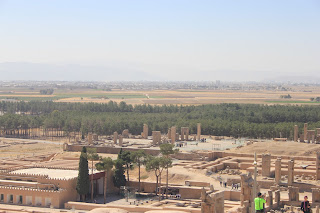 You can climb up to it, although there's nothing inside to see. You do get a good view over the whole site. Concealed in the trees is the Shah's semi permanent tent encampment set up for his extravagant 2,500 years of Kingship celebration, just before the Revolution. 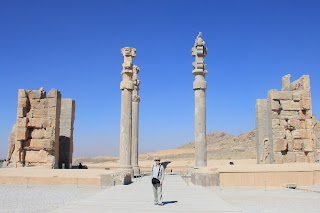 Finally, here's me outside the Gate of All Nations, just to prove I was there.

This site sort of leaves you speechless. It is enormous and extravagant and impressive and breathtaking. In places you can see the calcification of the stone work where the fire set by Alexander burnt the buildings. A real sense of history just wandering round it.

There is an irony, however, that the only proper written records, apart from cuneiform inscriptions saying things like "I, Xerxes, built this", are in the Greek accounts from Herodotus and the various lives of Alexander. All the Persian records were destroyed at the Arab Conquest, when cuneiform was replaced by Arab script.

I think it is true to say that the Iranians don't really think of Alexander as Great, and they are most insistent that they aren't Arabs either.

Anyway. Unmissable. If you have a chance, go.