Just up the road from Persepolis are the rock face tombs of several Persian Emperors. As it was such a prestigious site the Sassanids commemorated some of their great victories there with rock carvings as well. The area is known as Naqsh-e Rostam. 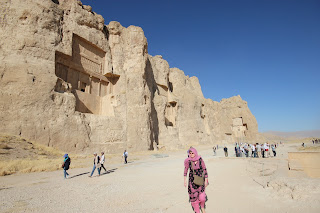 This picture is taken from the opposite end to the entrance as because of the way the cliff curves it's hard to get all of the tombs in from that direction. It's a long, narrow site which gives its own photographic challenges. From left to right you can make out the tombs of Darius II, Artaxerxes I, Darius I and Xerxes I. The lady in pink & black is Mrs T. 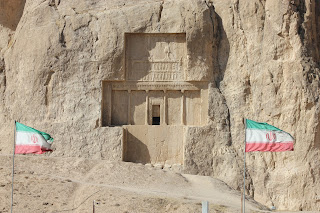 This one is Darius I, and is the tomb closest to the site entrance. The Iranians are proud of their pre-Islamic heritage as you can see from the two flags, so no danger of these being trashed ISIS-style. 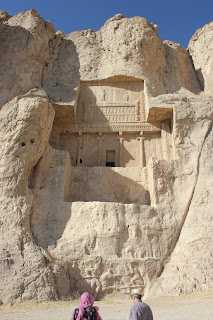 This is Artaxerxes I's tomb. 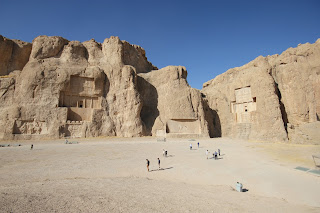 This is the best picture I have from the other end. I seem to have some individual tomb photos missing, which is a nuisance.

For the wargamer the Sassanid rock carvings may be of more interest. 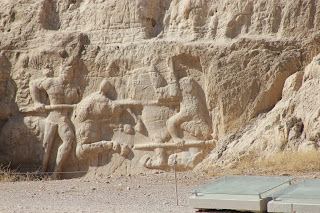 This one is the Equestrian Victory of Hormozd II (302-309 AD). To quote the sign on the site:"...shows the triumph of Hormozd II (recognisable by his crown which was shaped by an eagle carrying a pearl in its beak) over a mounted foe....he is represented on horseback charging at full gallop and unhorsing with a long lance an enemy who wears a plumed helmet adorned with the family insignia of Papak, the governor of Georgia. Behind the king his standard bearer carries a banner consisting of a lance topped by a horizontal bar adorned with two highly decorated globes and three strips of fabric waving in the wind." 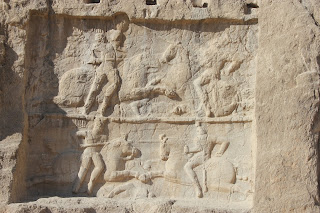 The Victory of Bahram II (274-94) "...shows in a double register two victories of Bahram II.  The king wears a crown adorned by an eagle's wing.....in the upper panel gallops towards a mounted enemy and unhorse him with a long spear. His standard bearer (not well defined) follows, carrying a flag (perhaps the red war banner described by Ammianus Marcellinus) consisting of a foe surmounted by a horizontal bar adorned with three globes and two hanging tassels. A second foe (possibly a Roman) is fallen under Bahram's horse. The king's horse is magnificently equipped and large conical tassel fall from the saddle and the harness is elaborate. The king himself carries a long quiver on his left thigh. The lower register depicts a similar equestrian combat: Bahram II charges a mounted foe with a long lance while trampling another enemy under his horse." 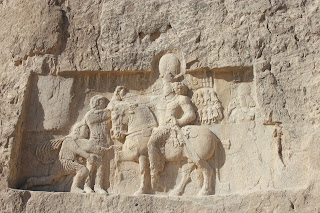 The Triumph Relief of Shapur I. This shows Shapur on his horse receiving the submission of two Roman Emperors, probably Valerian and Phillip the Arab. There is some dispute as to which is which. 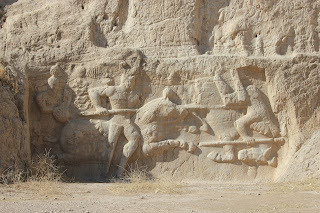 Dammit. Don't have a caption for this one. 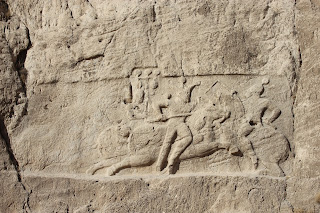 This one is uncertain, according to information at the site. It's probably Shapur II, again. The horseman has a crown similar to those on Shapur II's coins. The horseman is in mail, wearing a Roman helmet. You can clearly see the Royal Standard in the background.

Sorry for the incomplete record, for which I have no real excuse, except as always at these sites you're dodging round people to get pictures without anyone obscuring the scene, whilst they're doing the same.
Posted by Trebian at 19:59