As regular readers will know I've been playing some early WW1 games using 6mm Baccus figures and Op14. In fact my earliest Great War collection consists of 15mm Minifigs, British & Germans, set up for 1916 onwards. I've had them quite a long time, - my first rules for them were written on an Amstrad PCW - and they have never really had the usage I envisaged for them. I think they got used to play an Amiens scenario with Op14 a couple of years back.

They were always intended to do Divisional level games, stretching to a corps at most. I've never really solved the problems with this level of resolution. A while back I tried again with Square Bashing, - the revised version. The original version had issues - too many dice, too much calculation - and the more recent version worked okay for the scenario that game with the Army Lists. The trench game was less successful. Anyway, time to revisit a scenario based game. Based on what was to hand, - mainly the Osprey on Cambrai - I reckoned I could get an evening's game out of the action around Bourlon Wood at the back end of November as the Germans were getting ready to counterattack.

I adopted my usual approach of scanning the map then dropping a grid overlay on it in scale with the rules and my table. I can rotate the grid to get the best fit, then print it out to lay the table out. There's then a bit of trial and error to get everything in the right place.

As every RFCM/Peter Pig game has a pre-game sequence and a comprehensive victory points mechanism you (well I) have to work out how much of that to cut. For example there's a whole load of stuff about moving scenery around and so on which isn't helpful if you've just struggled to get the map right. Then there's the objective markers, which are actually useful in driving the game dynamic. 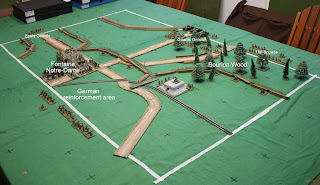 Here's my initial go at the set up. Brits to the top right, Germans bottom left. I put some trenches round the German reinforcement area for the actual game, and moved a few of the units in the Guards Division around. 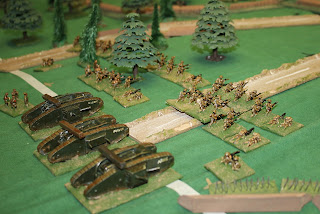 For example I spread them out over three squares to avoid traffic jams, not as I have them in this picture. 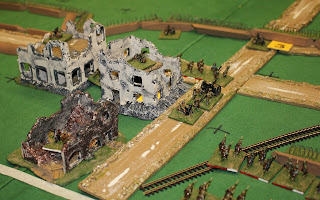 The objectives are denoted with yellow markers. Will & Phil took the British, with Phil getting the Guards. I ran the Germans with Chris K. Phil noted that he had a Great Uncle, I think, who fought in Bourlon Wood. 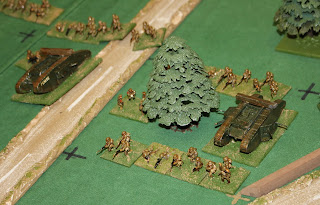 The British pushed forwards aggressively, grappling with the issues of how to launch a co-ordinated combined arms attack. 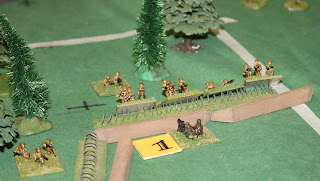 On the British left Will launched the first attack on a German machine gun nest hidden in Bourlon Wood. This was beaten off with losses. 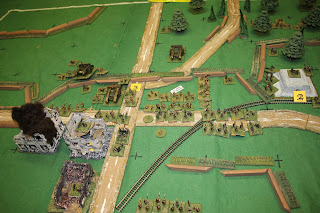 In the centre a British bombardment had gone in and destroyed a square of defenders. The thinly held initial German line was pierced, despite the delayed arrival of one of the tank units. The Germans launched an immediate counter attack, as is their style, and actually came a bit unstuck. 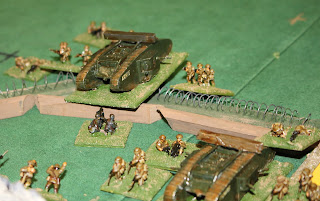 One German MG got the full armour rollover treatment. 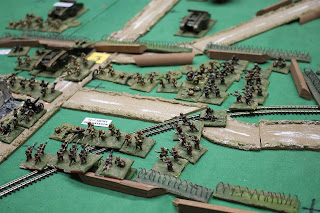 Alas the tank attack on the MG was beaten off with casualties. However the British fared really well against the German counter attacks and gave them a bloody good hiding. However, had they overstretched themselves? 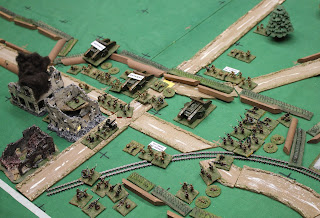 The fortunes were truly mixed.  The second attempt to overrun the MG on the German left succeeded, and one battalion on the right fought its way forward, but failures elsewhere left them dangerously isolated. What you can't see here, however, is that the Scots Guards have fought their way up the sunken road and into Fontaine Notre-Dame from the left, cutting off the defenders. 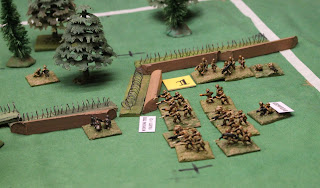 Not to be outdone Will finally led a couple of service battalions of the Duke of Wellington's Regiment into the defences and started to clear out the Germans on the northern edge of the wood. 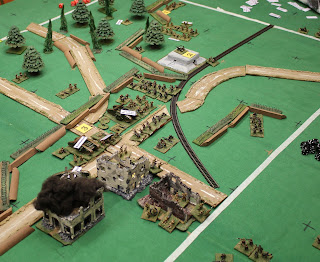 You can see here that the Scots Guards are in the buildings on the German baseline. The Guards have also fought their way into the square in front of them. Elsewhere they're consolidating and the Germans are having a frustrating time of it.

As night fell the British were holding a burning Fontaine Notre-Dame and had made good progress on clearing the other defences. The German counter-attacking forces were in a bit of disarray.

Compared to the historic outcome its a bit mixed. The British got into the village earlier, but were evicted with heavy losses, partly due to poor artillery preparation. They lost a lot of tanks in the village to German artillery as they got separated from infantry support. To the left of the village the German MGs were more effective and prevented the Scots Guards advance. I may need to increase the range for pre-positioned MGs in future games. The fighting in Bourlon Wood itself was bloody and confused, as in the game.

The points score gave a marginal British victory, which didn't look right to me as I thought they'd done better than that.

On balance not a bad evening's entertainment and future games will be improved due to my increasing familiarity with the rule system. I think it will fill the gap I have with some minor surgery.