Back from my holidays

Here's an update about the production version of our Battle of Northampton game that we've been taking round the shows in the second half of 2016.

I know it has been quiet round here. That's because Mrs T and I have been off again. No military or history links this time, - we just went to Dubai to see the Rugby 7s, followed by a quick cruise round the Persian/Arabian Gulf. Very good deal in the Radio Times, since you ask. Can't see how they made money out of it. 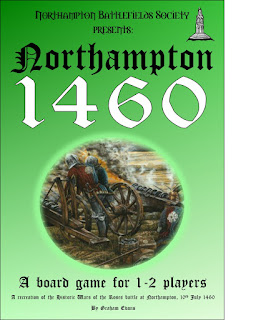 Any how, now I'm back I've been able to get stuck in to finishing off the production version of the Northampton 1460 game. It has been in a fairly good state for a month or so, but finishing off the final details has been a bit of a struggle.

The game is being sold by Northampton Battlefield Society and all proceeds will go to them. We want it to be able to appear in places like the Bosworth Battlefield Centre or local museum shop, so we need a professional finish. Hopefully the cover looks like it has been done by someone who knows what he is doing. What I didn't want to do was to produce something that looked like it had been self published through LuLu or similar, - that's fine for people who know they want to buy, but for the casual market I wanted more visual impact.

I have to say that this has been an interesting if frustrating process. If you've seen the game in operation (link) you will know that it includes a big hefty board made of multiple layers of plywood and blocks of wood with removable flags stuck in them. Translating that into something we can produce and sell at a reasonable price was a challenge.

A series of conversations with Phil S and Chris A refined the product idea. We want to make this available in places not normally associated with proper board wargames as suggested above. The final idea was that it should be a game-in-a-book, a bit like the games I did for the Society of Ancients. The idea was not to have it in a bag with components that could get taken out in the shop and lost, but to have it all in the book. The centre pages would be printed on card stock  which can be removed by opening the staples and would give you the board, cards, playing pieces and so on. The staples then re-closed mean that what is left is the rule book. Anyone browsing the product would be lured in by the seductive artwork on the game pieces, which would have lots of nice heraldry.

So that's what I've designed. I've got a printer lined up who could get his head round what we were asking ("so...you sort of want the covers inside the book?") and I've even managed to produce professional printer-ready file with crop marks and colour registration panels and stuff like that. My word, I've learned a lot about my DTP package this week and the needs of professional printers.

We've even got an ISBN for it.

Alas it won't be available in time for Christmas, but I'm hoping to hit the Christmas spending money market. We haven't worked out all the wrinkles around distribution, - you'll be able to buy it from us at shows and at our monthly meetings as a bare minimum. The first appearance will possibly be at the Guild of Battlefield Guides annual meeting, which is being  held in Northampton in mid-January, followed closely by the prestigious "Weapons and War" day at Kettering Museum on the 21st January. The price at those locations will be £12.99 or £9.99 to NBS members. Once I've got a copy I can work out the postage costs and we can look at ebay or fulfilled by Amazon or something like that and then see how many people who said they'd buy a copy will be as good as their word.

Fame but possibly not fortune awaits me.