As previously advertised, here's my go at refighting Coutras.

Coutras is one of those battles that pops up in books about fighting pike & shot battles or in similar magazine articles. The reason is simple. It appears in Oman's seminal "Art of War in the Sixteenth Century" where there's a pretty good orbat and a good map that ties up with the battle description. Mostly.

For me I've been wargaming the late period of the French Wars of Religion since University, so this is a return to basics for me. The battle itself is pivotal for a number of reasons. It shifts the military tide from the Catholics to the Protestants and puts Henri de Navarre's footsteps on the road to the throne of France. Tactically he demonstrates the strength of ordered, deep, pistol armed armoured cavalry who can charge home against traditional lance armed gendarmes as opposed to caracoling. He also makes an early use of volley fire in the way his enfants perdues are deployed and ordered to fire. Interspersing of fire-armed infantry amongst horse is a tactic that re-appears amongst Rupert's cavalry during the ECW. So, lots to consider here then.

It's actually not a large battle, - no more than 10,000 a side, and probably much less. The real business end of both armies is the horse in any event, with the infantry a side show. Literally. Both armies used their infantry to secure their flanks whilst the matter was settled by the mounted chaps in the centre.

Due to other people's Christmas commitments there was just two of us, and my opponent was Chris A on this occasion. He took the Catholics, and I took the Huguenots. 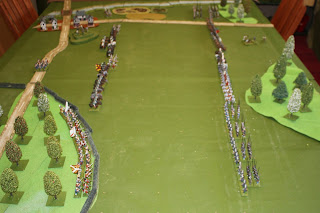 So here is the set up. Huguenots to the left, Catholics to the right. Bottom right is a walled park area known as The Warren. Top of the picture is the River Dronne and a marshy area which reaches up to the road. The village of Coutras is top left. 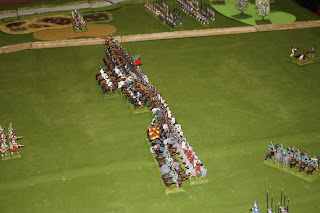 This isn't a subtle battle, so in a couple of moves our cavalry lines had hit one another. My enfants perdues had inflicted one of two hits, but my pistol fire was ineffective (because we were playing the rules wrong). My outer units of reiters were completely overwhelmed by the opposing Gendarmes. At this point my initial thoughts that gendarmes in this period were over powered in the army list was being born out. 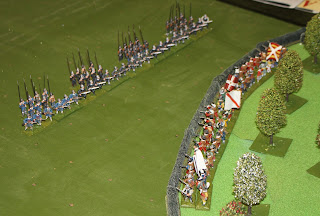 A little behind where the game clock should be the Catholic infantry started to march on the Huguenots in The Warren. As remarked above I was a little under-gunned in the middle on the factor front, not helped by some dreadful die rolling, exhibit A being above. 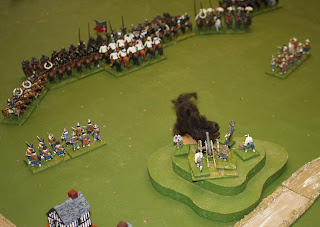 I had one small opening, which was the opportunity to blow away the gendarmes top right. I only needed one hit out of three shots and missed with all of them (I needed to win one of three opposed die rolls, - failed on all of them). 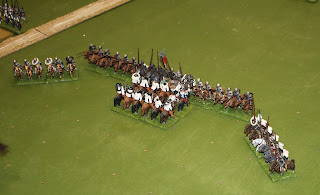 So my flanking reiters were swept away, and the Millers then failed routed into tests, so the game was over, but we played through the rest of the turn. 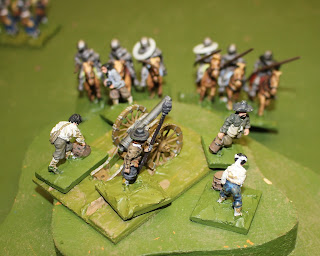 To rub it in Chris charged my artillery, and killed that too. 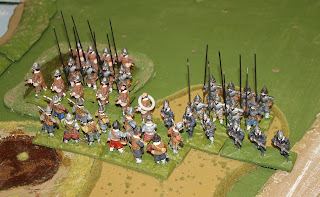 I did a little better with a couple of skirmishing arquebusiers against some sizeable infantry regiments struggling through the marshy ground. 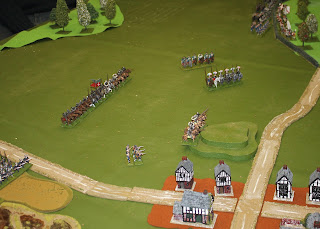 So the middle of my army has disappeared. Can I salvage anything from the flanks? 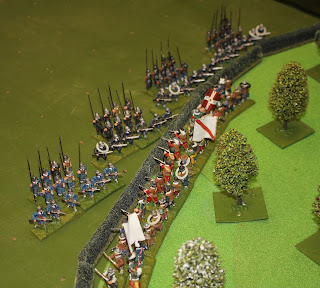 Well, no. An infantry unit on my extreme right wing breaks too, so I'm well through my breakpoint level and it is all over.

Well, that was rubbish. Completely one-sided game. And then we realised we'd been playing the rules slightly wrong. The game had only taken an hour, so we reset it and swapped sides.

More of which in the next blog.
Posted by Trebian at 14:53