So, the last game being over so quickly we swapped sides and did it again. And this time we used the rules correctly. This mainly improved the effectiveness of the Huguenot pistol armed cavalry against the gendarmes. 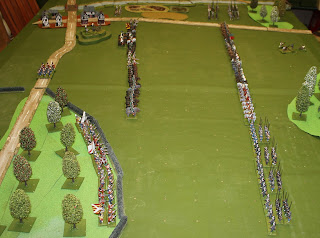 We adjusted the starting positions slightly, too, but nothing significant 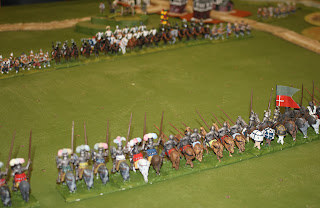 Playing the Catholics did mean that I could take some pictures from behind their lines. 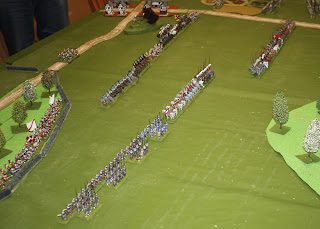 Also, I followed the Catholic original tactics more closely. This meant advancing with my left to clear out The Warren and disperse the lighter cavalry in the Huguenot right centre. 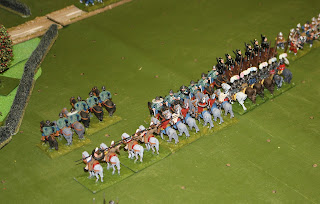 This started well, as my stradiots broke Chris' argoulets. I didn't take a breakthrough move here, as my initiative only gave me two divisional splits, and I thought I'd need them later. 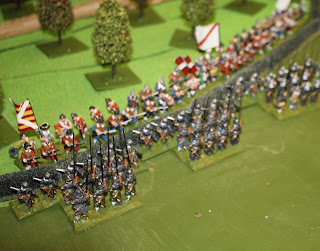 I was soon up at The Warren, forcing my pike men over the hedge line. 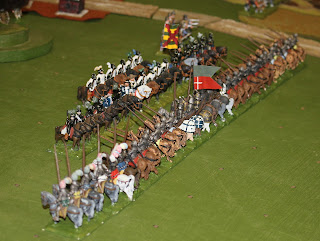 Then it was time for the big boys to get involved. Chris was more flexible in his use of his central enfants perdues as he seemed more worried about the threat to his left from my infantry.

The conflict around The Warren was hard fought, with BPs being exchanged. 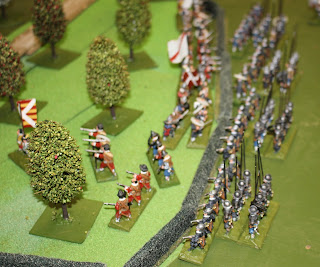 However, I was able to break Chris' extreme left wing infantry unit. Things were looking up. 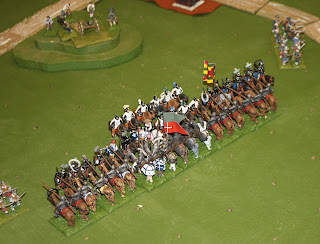 In the middle our cavalry locked horns, with the Huguenots putting up a much better fight this time. 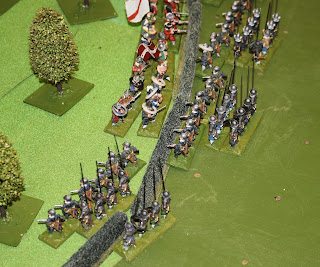 In The Warren I took a divisional split, and broke into the position. 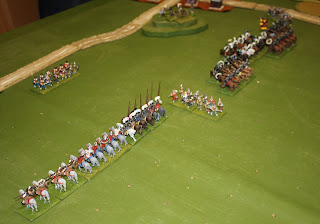 Having finally dealt with the rest of Chris' lighter horse, he wheeled round a couple of units of arquebusiers to rough me up a bit with flanking fire. 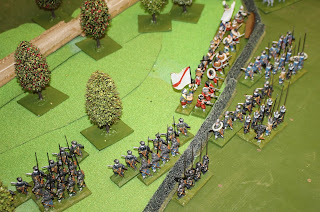 Meanwhile, things were going even better for me in The Warren. Alas this was just a side show. 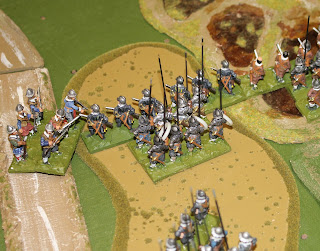 Over in the marsh, Chris was able to get stuck into one of my infantry regiments on even terms, and broke it. 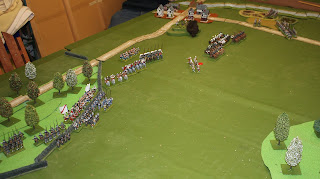 But the main battle was in the centre, where the day would be won or lost. Henri's Millers (in white) had finally broken the gendarmes in front of them, and the others followed soon after. Closer than the first game, but a Huguenot win.

So, a win to each side, but also two wins to Chris, so that may tell you more about us as wargamers rather than the game balance.

Still, a good enough way to spend the afternoon.
Posted by Trebian at 12:16