So previous attempts to make this work have lead to walk over victories for the Spanish every time. However, usually I'm commanding the Arabs and Moors and I'm rubbish with light horse. The true test would be to reverse the situation and have someone who knows what he is doing with light horse have a go with the Almorvids and Andalusians. 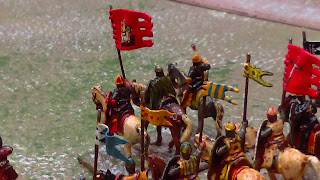 This time I didn't have my SLR with me so these pictures were taken on my smart phone. 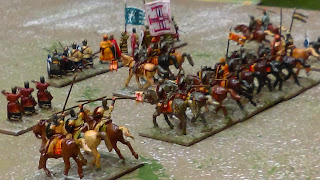 Couple of eye-candy shots to get  the camera aligned properly. 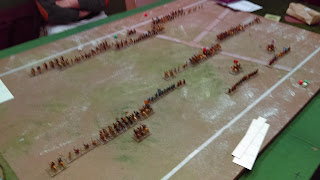 Clearly a waste of time as this is not a brilliant picture. Looks a bit blurry. It is a bit blurry. Serious camera shake. This experiment is looking like it won't be repeated. Spanish at the bottom, Muslim invaders at the top. I started with a general advance. Unlike the last game I had increased the number of camels in the Arab armies to give them some backbone. 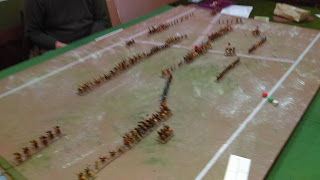 Phil is already using his light horse to pull the game wider. Problem is that although we have 3 DBA armies on each side the table width is only doubled. This congestion favours the Spanish. 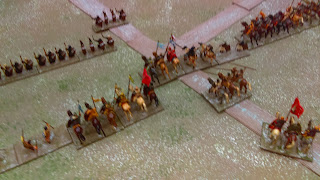 First contacts in the middle go all my way, and Phil is soon a couple of elements down in this command. Think he's lost the camels in this command already. 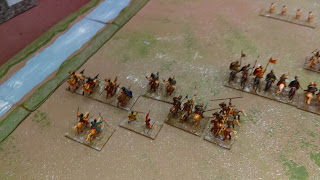 On the left flank it's a bit more even, and we're trading elements. However better pip dice for me means I have better field position. 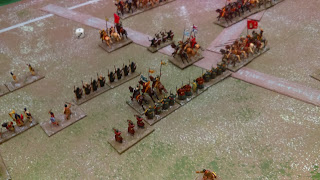 The centre is going even better, and I punch a hole through the middle. There's not a lot Phil seems to be able to do against my rampaging knights. 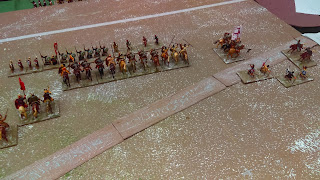 On my right I'm winning the fight out there too mainly through good dice rolling not superior troop types. Pictures seem to be getting into focus at last. 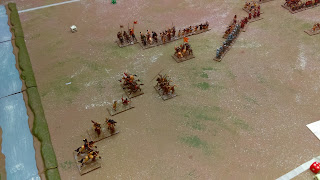 On my left Phil has succeeded in getting a couple of light horse free to get round my rear. Doesn't really help as I'm whipping him elsewhere. 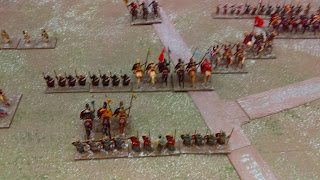 Bit to more blurriness in the middle. By this time the centre is demoralised, as it the Arab left. Or was it right? Anyway, I'd won comfortably.

So, it looks like the Spanish are unstoppable. Post game discussion revolved Phil pointing out the lack of terrain and how adding more, rougher areas (eg ploughed fields) would even things up as they reduce the knights ability to "quick kill". I admit to not using all the DBA terrain deployment rules (and we didn't have camps)  so that's something for next time.

Plus I've finished more knights, so the Arabs will be boosted by some Christian Mercenaries.

But the big learning point is to use a proper camera.
Posted by Trebian at 19:56