An evening with the Guides

After our Friday afternoon event with the Guild of Battlefield Guides we were invited back for their Annual Dinner on Saturday evening. Chairman Mike was unable to attend so it was up to Phil and me to wine and dine on behalf of the Society. It's a dirty job but someone has to do it.

You meet all sorts at these things, so it was a pleasant surprise not only to renew my acquaintance with Roger Emerson on Friday, but also with Chris Scott, who was in the Roundhead Association when I was, and eventually rose to be Lord General. He had fond memories of my old regiment, John Brights, and we had a few mutual acquaintances including Pete Berry now of Baccus 6mm. I also bumped into one of my predecessors as Chairman of the University of Sheffield Wargames Society.

Gary Sheffield was there too, so I had a chance to have a chat about The Great War and Paddy G's contribution to our scholarship on the period.

The occasion enabled more in-depth discussions than on the Friday afternoon, so the disappointment I felt about attitudes to the use of games & simulations to understand battles and battlefields was able to be over turned somewhat and hopefully minds are a bit more open. 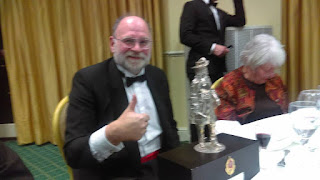 The excellent news for the Northampton Battlefield Society was that we won an award. You can see Vice Chairman Phil with the "Nathaniel Wade Award" looking very pleased with himself. I'm fairly sure the lady next to him hadn't dozed off by this point of the evening. Apologies for the quality of the picture. I was using a smart phone and I'd had a glass or two of lemonade as well.

Here's the details of the award from the Guild of Battlefield Guides Website:

Award Ethos:
The Nathaniel Wade Award will allow the GBG to publicly recognise the contribution of an individual, group or organisation associated with the GBG, who through their efforts has made a significant contribution to the craft of battlefield guiding and the wider Military History community.

Qualification Period:
This is an annual award which will be presented at the GBG AGM – however, the award is not restricted to events or a contribution made in year. The recipient may be recognised for their contribution or achievements made over a number of years.

Qualification Criteria:
The Nathaniel Wade Award may be presented to GBG members or non members; both categories are eligible to be nominated for this award.

Any Guild member may nominate a potential candidate to the Secretary for consideration by council. Final selection of a recipient(s) will be made by the GBG Council.

We're quite chuffed that we've picked up an award previously won by the Belgian Tourist Office and also the other winners, who represent serious players in the Battlefield Tourism industry whereas we're just a small bunch of enthusiasts with a battlefield everyone wants to build on. 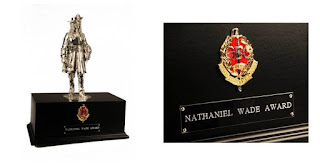 The trophy is really nice, - Nathaniel Wade was in the Duke of Monmouth's army, so this is him in full rig, - and we'll be using it to get some more publicity for our cause. You'll also be able to see it on our stand over the next 12 months. Stop by and say hello.