Joining the Guides for a Day

One of the members of the Northampton Battlefields Society is also a member of the Guild of Battlefield Guides.This year he was responsible for organising their AGM, and chose to do it in Northamptonshire. The real business of their meeting is on Saturday but he arranged a taster get together on Friday afternoon to look at the Battle of Northampton and the work that NBS has done to promote and protect the site.

NBS was represented by Chairman Mike, Vice Chair Phil and me. Mike was there to talk about the battle, Phil to demonstrate his battlefield model and I was there with the participation game and the newly printed book. 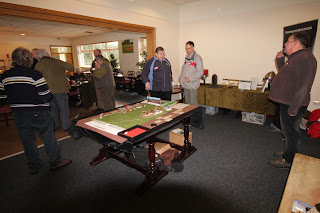 Ironically the meeting was held in the Delapre Golf Club function room. The Golf Club has been our "bete noir" over the car park development on the edge of the battlefield, but on this occasion we were able to build some bridges. Still going to oppose their proposed works however. We had a little side area where we could get our kit out, slightly away from the area where food was being served and big coats were being worn. 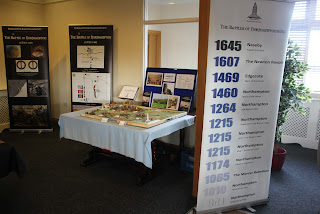 I think we put up a pretty good display. 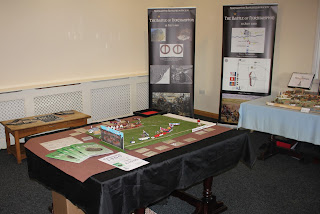 Looks quite professional. How successful we were it's hard to say. These are "professional" guides and won't be guided by anyone who isn't a Guild member. Neither Mike, Phil nor I fall into that category, so we weren't going to lead the actual walks for the two syndicates. Clearly our member who is in the Guild knows the area, but the other group were led by a guide who hadn't looked at the ground and was working off maps. Based on where he took his party I'm not sure we would entirely agree on his interpretation. As we've been working on this site for a few years I think we'd have the view that you need local knowledge to tell you what the maps are telling you about what is new and what is recent modification to the terrain.

I was also disappointed by the attitude that a number of Guild members took towards the use of models and game-based simulations to understand and promote the battle. I suppose I'm so used to being amongst people who take what wargames can tell you seriously I wasn't expecting such a dismissive approach. Some Guild members got it, or were on their way to seeing the use, (sold a few games) but we probably needed more time than we actually had once everyone had seen the gunpowder demo and the field walk. 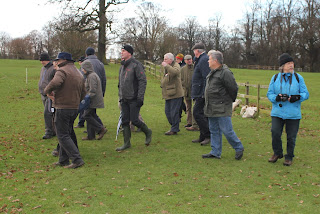 This is what the Guild looks like at play. 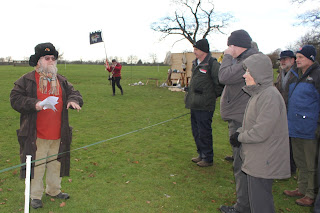 This is an old friend, Roger Emerson, who I haven't seen for 30 years. He was explosives officer for the Roundhead Association when I was a young musketeer back in the 1980s and taught me gunpowder safety. Great character and great bloke. 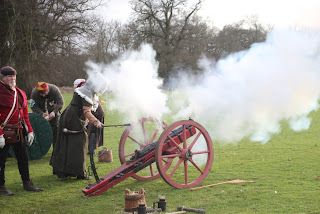 The guns were provided by the English Free Company. 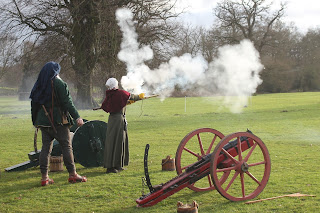 They had a nice stick gun as well as the breech and muzzle loading cannons. 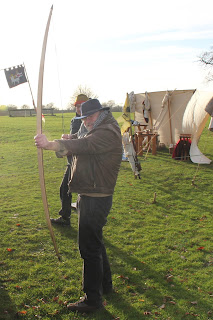 They also had some longs bows. Here's Phil, just letting the string loose having done a full draw back to his ear. 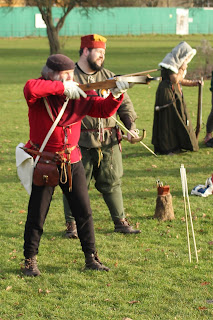 And here's a cross bow being shot. I have caught the moment of quarrel release here if you look closely. 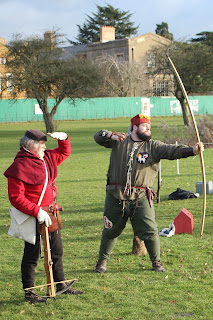 I couldn't catch a cloth yard shaft in flight, however.

It was a fun way to spend the afternoon, and it went well after we all breathed a sigh of relief following the short snow flurry we had in the morning. Hopefully the Guides learnt a bit from us and about how we have to fight for battlefields with all the resources we have.
Posted by Trebian at 14:18