I have received a photo report from an early adopter of "Northampton 1460" who has tried the game solo. Apologies if the pictures are a bit small or indistinct, but they're what I've been sent. 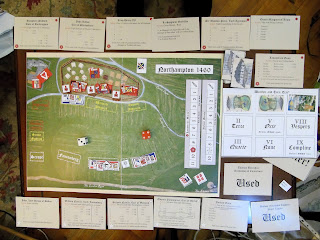 The report opens in turn three (yes, the weather cards have been placed incorrectly on the turn track, but it doesn't matter for the moment). The Yorkists have tried to negotiate, and then excommunicated the Lancastrians. The Lancastrians look to me to have initiated the cavalry combat and won it. Even so, the Yorkist morale is higher than Lancastrian, so that's good for them. They have sent in Fauconberg's battle to start the attack on the fortifications. 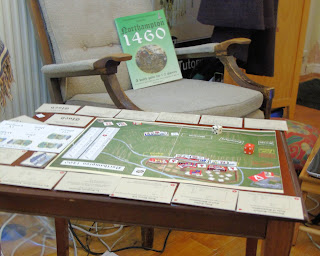 It seems that the Lancastrians hit back at Fauconberg in their turn as the Yorkist morale is dropping. There's a few Lancastrian casualties at the back of the board, however, so in the balance. 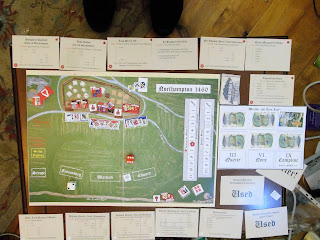 Two turns on and Edward of March has got stuck in as well. Unluckily for the Yorkists Grey has not swapped sides, so it is going to be a hard slog.  The Lancastrians have had an artillery misfire - probably in turn 5 - as they've only got two cannon counters left. However, the red 6 on the board is for their artillery fire this turn, and that means the Yorkists have taken casualties and their morale is now in danger of causing them to rout. 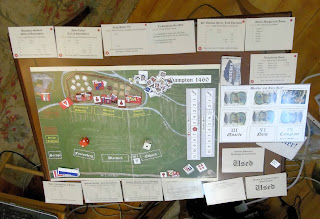 In this picture I think that they've failed the morale test as all their counters are piled up behind the Lancastrian defences.(I hope the die roll isn't from the morale test, as you roll higher than the morale number to rout, not less. Only time in the game when low numbers are good and high, bad). 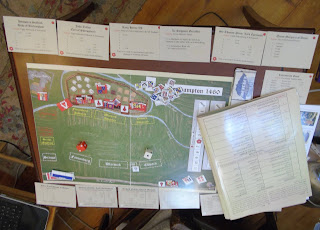 From a comment from the player added to the picture, I think all the Yorkist leaders got rounded up and killed, making this a significant Lancastrian victory. Losing the cavalry battle at the start of the game means the Lancastrians have pursuit troops, which makes it harder for the Yorkists to escape if things go badly.

So, history turned completely on its head.

Thanks to Richard for sharing his pictures with me.

Email ThisBlogThis!Share to TwitterShare to FacebookShare to Pinterest
Labels: Battle of Northampton, Northampton 1460