On the road with Northampton 1460

We did the official launch of the Northampton Game this last Saturday. Kettering Museum and Art Gallery were looking for an event to pull the punters in on a cold January weekend, so the Northampton Battlefield Society, in association with Harrington's Company, agreed to put on a "Weapons & Warfare" day. 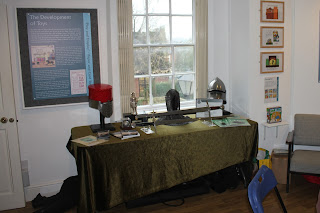 Kettering Museum is a lovely little town museum in a rambling building with all sorts of little rooms. We had three upstairs to put up our displays. As you can see from above with our recent recognition from the Guild of Battlefield Guides we have quite a good display of awards on our table, amongst the weapons and armour. 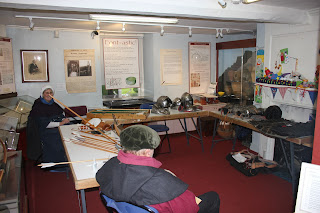 We have some cross over membership with Harrington's which makes it easier for us to put on these type of events. Here's the room with the Harrington's armour and their fletching display. 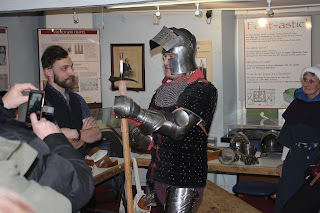 They also did a short presentation about putting on armour. This is Corin, one of our committee members, rigged out in all his finery with his Bec-de-Corbin. We had about 15-20 people in the room for this, I think. It was a bit cramped. 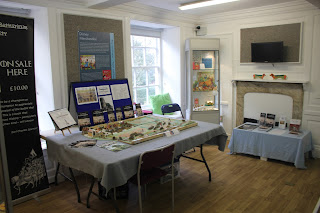 Phil had his model in the middle room, along with a little table for our Northampton book. The model is always a good talking point. 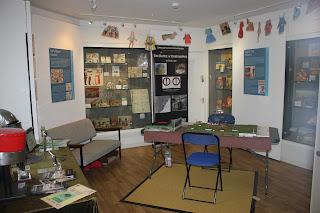 I was in the "paper toys" room, which houses the museum's collection of cut-out toys and dolls. A little bit more genteel than my usual settings for running the game. 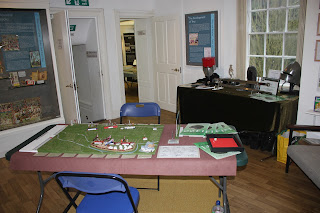 As it's an old buildings rooms are slightly odd shapes, and the need to ensure wheelchair/disabled access means you can't use all the space as efficiently as you might like. 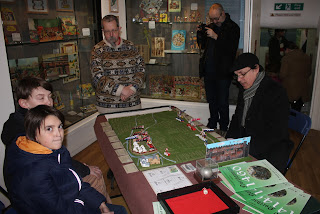 A few old friends turned up to play the game and buy a copy. The man with the nice jumper is Jerry from Sheffield. He was one of the big fans of the original game when we first put it out at shows and wanted to buy one. He bought two, - one to cut out and one to keep. He also wanted it autographing. I should have given him a discount.

The man playing the game is Graham Hockley, of "Ad Hoc Games" who often does really good participation games at the likes of Salute, with our mutual friend Chris, who is taking pictures in the background. He is playing two of his children. I'm pleased to say he gave them a damn good thrashing. 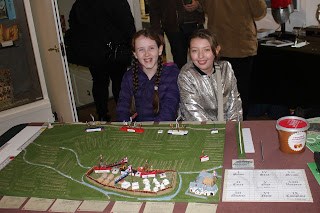 The daughter of my Heraldic Adviser, Graham Fordham, has been a wargamer from the cradle and plays DBA very well I'm told. She took me on with her friend, and squeezed out a narrow Yorkist win. She wasn't helped by her friend refusing to attack with the cavalry because she didn't want to "hurt the horses".

We had a steady stream of people through and I ran the game about 10 times, mostly with children aged 10 or less. Although all were well behaved and attentive I can tell you that's hard work and hard on the voice. Still, hopefully they enjoyed themselves and learnt something.

We sold 8 copies of the game which on reflection is okay. 5 of them were bought by friends who would have bought anyway, I think, so that's three we wouldn't otherwise have got.

And one purchaser joined the Society as well, to get the discount on the cover price.

So I think I'd have to say a day well spent.

PS I took sometime later on to set up the game on BoardGameGeek. As I write it is awaiting approval by the moderators. As I was doing it I also found out that some of my SOA games and free rules have also ended up on there, although I'm there under two variants of my actual name. I've dropped them a line to see if the can merge them.
Posted by Trebian at 17:03