As you will all recall before Christmas I announced that the work on the Battle of Northampton game was complete. It went off to the printers and after some hiccups I should receive the final version at the back end of this week.

I have a few not-perfect copies - the centre pages are printed on paper not card as required - and I have been able to produce a demo version of the sale version through the use of a thicker than usual lamination pouch.

It's a relief to see that the concept really works, and the quality of the printing/output is really satisfying. I'd say it stands comparison with the production standards of, for example, Black Powder.* 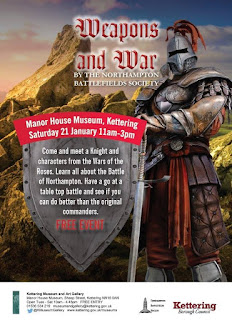 This means we're confident enough to do pre-launch publicity. The

actual launch will be on the 21st January at Kettering Museum, where there'll be other stuff going on and we'll have copies to buy and you can play the full show version. The price will be £12.99 or £9.99 for Northampton Battlefield Society members. Don't know what the postal cost will be as I don't know how much the final version weighs and hence the cost of the stamps.

Based on what we did with the book Mike Ingram wrote a year back Mike sent out a press release and we got picked up by local radio, as I trailed in the last blog.

So this afternoon I went in for my 15 minutes of fame in the BBC Radio Northampton studios at the top of Abington Street. You can listen to the show on the website for the next month: link. I come on about 40 minutes in. If you hear either David Bowie or Fleetwood Mac I'm on just after them. I have to say the show presenter was very good at putting me at my ease and getting me to talk ("Quelle surprise!" I hear some of you say), and I got most of what I wanted to say across. I had spoken to a production assistant beforehand to cover some of the ground, but I never got across completely why it is important that this is in book format not in a box (although the woman from Library Services who was on after me completely got it).

Having listened back to it I think it's okay, although I say "Um" and "Absolutely" a lot.

Which is, um, I suppose, how I do actually talk. Absolutely.

Come and see me in Kettering to find out for sure.

* I may not like the rules but respect is due to the production standards.
Posted by Trebian at 17:23

Email ThisBlogThis!Share to TwitterShare to FacebookShare to Pinterest
Labels: Northampton 1460