I'm nearing the end of the painting odyssey that is my Feudal Spanish/Andalusian/Almoravid project.

I'm still light a few bases of Christian Knights (probably need another box, if I can find them) and some odd light infantry units. Oh, and I need to do some more crossbow conversions, because you
never get enough in a box.

However, my last unit of Spanish heavy infantry is done. Well, I say last. I've got lots of figures left, (thanks Mark!) so I can do more, but I don't need to do. Up until now I've painted them as dismounted knights and retainers, so they've been fairly uniform in pose and costume. The latest unit is a bit more raggedy, as I've gone for more of a Christian/Muslim borderand feel for them. 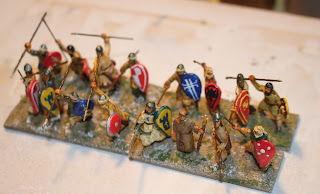 I've mixed figures from all three boxes of "El Cid" infantry, chopping off swords and replacing them with spears almost regardless of pose. I had a spare monk/priest from the Spanish command box, so I pushed him into the front rank for a bit of moral leadership. 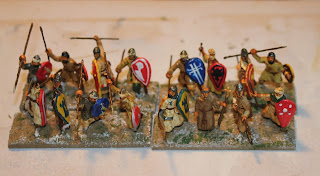 The poses mostly work. The one I like the least is the one at the back with the blue shield with a white cross. The stance seems a bit odd, but I suppose he could be thrusting with his spear.

These are also a bit odd for what I normally do. I rarely mix poses so extremely in a heavy infantry unit. I tend to the view, especially in units with long weapons such as spears and pikes, that all the chaps in a unit would be doing the same thing, with minor variations. If you don't do that then you end up getting in each other's way, tripping colleagues over with the butt end of your spear and so on. The modern multi-pose fad for having everyone waving their arms about and pointing weapons every which way is a nonsense. Sure, have heads slightly tilted at different angles, and spear points up and down by a few degrees, but for goodness sake have them all point in the same direction.

On a side note the Northampton 1460 game is very close to being available. I have some trial copies and they look great, - the printer now needs to do the definitive run with the centre pages printed on card, not paper, now I have finished correcting the typos, tightening up some of the rules and giving Margaret of Anjou her coat of arms on the biographies page. Our Chairman has sent out a press release and we're doing a launch at Kettering Museum on the 21st January, where we'll have copies for sale and you can play on the big, original, show game version. I will be doing some publicity on local radio on Tuesday 10th January, so if you are inclined to listen to the John Griff show after 2:30pm, you may hear me in action. I'm not sure how board games work as a strictly aural experience, but we're going to give it a go. As we live in the modern world you don't have to be local to listen, as the shows are available on line: link. They do podcasts if you miss it too.

Cross you fingers and wish me luck
Posted by Trebian at 11:55