This game took place over a couple of afternoons recently.Following on from my blog on New Year's Eve I felt the need to re-explore the Spanish Civil War some more.

What I never really did properly with the "If You Tolerate This" rules was do some fighting in built up areas. Despite me saying the air rules needed looking at I thought I'd better go back and look at the core mechanisms first to make sure they were performing as desired.

After the previous games there were a few things in the rules where I couldn't understand why I had made those decisions when writing them. Re-reading and re-playing them also made me really aware of my influences at the time and I felt that there were some bits that stuck out as really borrowed from elsewhere, and not in a good way.

Consequently I threw together a quick scenario that looked a little bit like the attack on University City in Madrid. The attackers were a column of Spanish Foreign Legion, complete with Moroccans and a Regular Army Division.

The defenders were some workers militias and some International Brigades, supported by a unit of Asaltos. 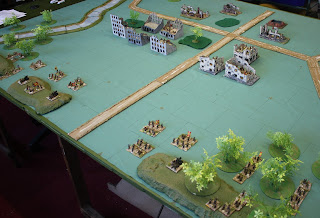 The Nationalists had some open ground to cover, but they were supported by some decent artillery. The Regular Army are on the right, the SFL on the left. They are faced by the Workers and IBs respectively. The Asaltos are at the back in reserve. 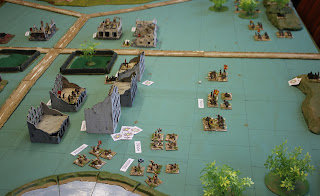 Phil had the Fascists and I played the Republicans. Phil, being Phil, used his Moroccans to turn the flank of the position. It was at this point that I started to wonder about some form of "zone of control" mechanism as the "Reserve Fire"process was misfiring a bit due to the turn sequence. In fact Reserve Fire was barely used in the game, and has subsequently been dropped from the game system to be replaced by "Interrupt Fire" for anything that comes within a square of a unit without attacking it. 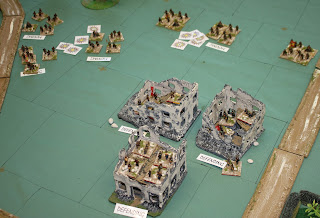 On the other flank The Workers are defending in depth and the Regular Army are taking some fire trying to close. 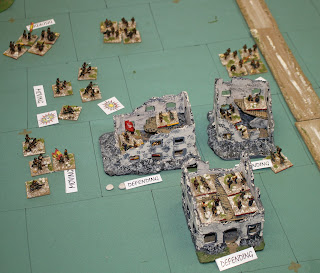 They move up slowly and camp for most of the game in front of the defended buildings. I got some of the rules wrong during the game and some of these units should have been broken. In any event I also decided that the casualty system needed revising. Units can take an awful lot of punishment if they are re-organised regularly, so I have since taken out the re-organisation option and dropped the hits a base can take from three to two. 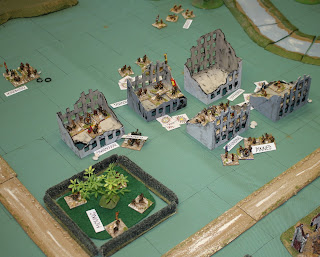 Phil slipped a Regular Army unit in between two of my units (see comment on ZOCs above) and camped in the city park, and then pressed in with the SFL 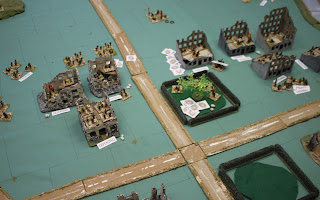 A lot of fire was pouring into the defended positions, and those Regulars in the Park took a lot of damage but they mucked up my reinforcement lines. Vigorous Close Assaults have evicted my IBs from two of the three buildings they were defending, and they have been bounced back into my second line of buildings. 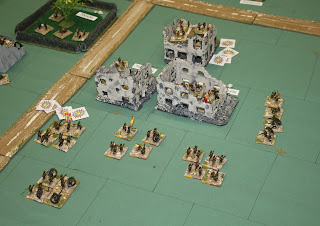 As his troops are just in front of the buildings Phil has been required to lift his artillery fire to the second line of defences, which pins my supports in place. 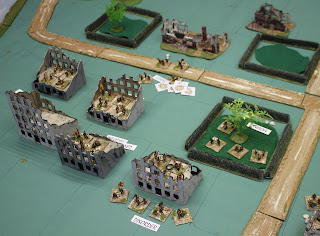 My Aslatos counter attack through the Park and drive the Regulars out in Disorder. They fall back into buildings occupied by a Legion bandera. Note that there is now a difference between merely occupying buildings and actually defending them properly to get full benefit in hand to hand fighting. When I attack this double occupied square I find I have some rule issues to deal with as I hadn't had that happen before. 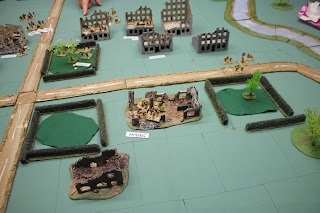 Elsewhere Phil has infiltrated his Moroccans to the rear of the position, cutting off escape routes. 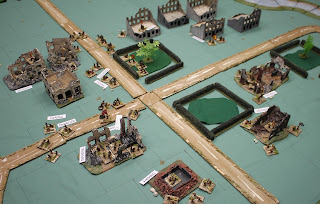 I'm now completely bottled up, but holding on defiantly with my Anarchist Militia. The IBs have been completely overrun. 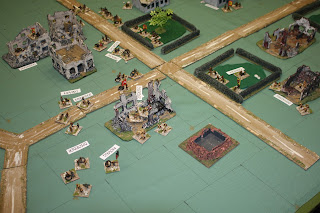 Overwhelming force finally sees off the Anarchists and it is all over.

Lots of lessons for me from this game and I've gone away and re-written chunks of IYTT. If anyone out there ever downloaded the rules and wants to help play test the next version, let me know.
Posted by Trebian at 11:38