So, I was up next. I was torn between taking "It's getting a bit Chile" and "If You Tolerate This" and in the end plumped for the latter for two reasons. Firstly, the rules for IYTT are stuck in my head and I might get myself more confused than normal and, secondly, because it would be good to play it with someone outside our immediate group who would bring a different perspective.

I set up the terrain and scenario to be very similar to the last game as it went okay and neither Phil nor Richard had played in it. Richard took the Basques and Phil got the Fascists. 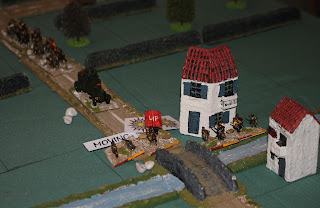 The table was slightly smaller and the two sides got to grips with each other even quicker than before. Phil's inability to roll higher than a two on the initiative dice meant that the Nationalist +1 did him no good at all, and Richard started first in all the turns. He also got a really effective airstrike in turn one (no pictures I'm afraid) that pinned Phil's right flank in position.

Richard's first move was to push some militia forward very quickly to occupy one of the villages. Phil countered with his armoured car and cavalry, trying to shoot the defenders out of the position. (BTW sorry for the lighting in these pictures. Richard has some really nice high level spots in Shedquarters West which are easier on the eye, but I'm afraid that for this table I was really missing the lower level more harsh light from the fluorescent tubes in Shedquarters). 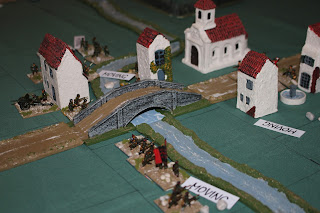 Phil was able to get his forces up to the centre village fairly quickly and seize the bridge as Richard's militia were easing their way into it from the other side. 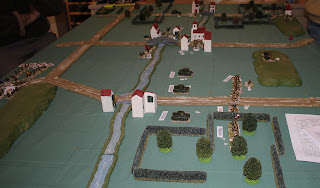 The wave of Russian, er, Republican, armour swept across the board, supported by Basque infantry. Phil was able to take the initiative, however, and slipped some infantry into the village (no picture of this). 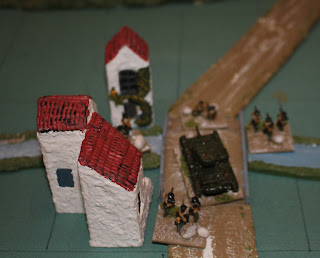 This gave Richard the opportunity in the following turn to launch a combined infantry and armour assault for almost the first time ever in a game of IYTT. You'll remember that my attempt to do the same in the previous game fell apart when my activations failed. 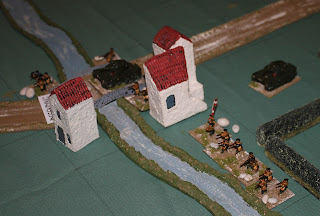 The position was soon reinforced by more Basque infantry, lining the river bank. 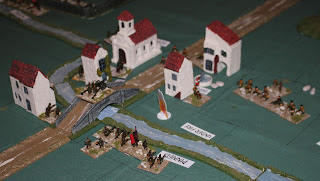 In the centre fire was being exchanged as the battle for the village warmed up. The Falange on the river bank are taking fire from one of the tanks off to the right out of shot. 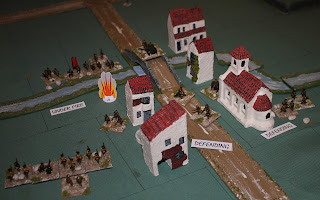 Phil is able to fight his way through the village, evicting Richard's troops and taking back control of the church . 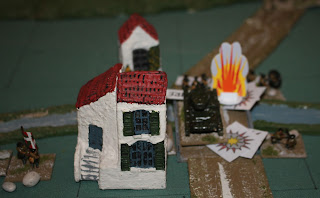 On the other side of the board Phil was finally able to get his howitzers deployed and started to shell the village.

My photographic record is really rather poor for the whole game, possibly as Richard had never played before so needed a lot of umpiring support (in a good way) to learn the game. I have no record of Phil's ill fated flanking cavalry manoeuvre in support of his armoured car, and the action generally in that area. There was some discussion of how badly the cavalry came out of the encounter and whether they should have a retire option when they come under fire. I need to think a bit more about that as I have an artillery retirement rule which players have historically completely ignored, preferring to hold onto the ground they occupy. However these last two or three games have been the first where cavalry has got on the board, so maybe time to reconsider.

We finished with the Republicans clinging on to two of the villages whilst the Nationalists were firmly entrenched in the middle of the table. It took them a long time to recover from the first round airstrike which disrupted their right, and I may need to look again at the effectiveness of the air rules. Phil was not helped by his failure in every turn to win either the initiative or get his air support into play.

Richard declared the game enjoyable and held onto a copy of the rules, so that is positive. I'm pleased, as re-development of the system seems to be going pretty well.