A Day in the West Country (3) Western Approaches

Finally it was Phil's turn to entertain us. He chose to give us his "Sink The Bismark" game. 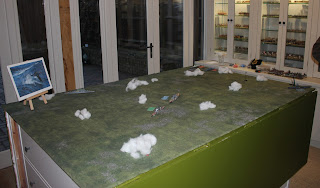 He made use of Richard's green/grey cloth to give the impression of a cold dark seac, and used some white smokey stuff to give the flavour of fog banks. The picture in the corner indicates how rough the sea is. 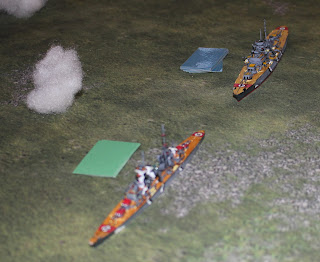 I was the Bismark and Prinz Eugen trying to avoid the Hood, Prince of Wales and Ark Royal battle groups and get out into the Atlantic to sink some ships. 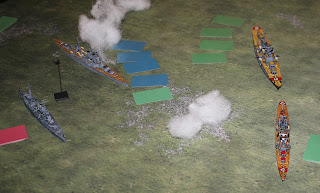 Finally I blundered into the Hood and Devonshire. Attempts to avoid them failed. The cards represent your attack options against the enemy - Big Guns, and Torpedoes, together with things like Fire Control and Drill that improve your effectiveness. Here both my ships are concentrating on the Hood (blue cards from Bismark, green card from the PE). The number of cards is the number of golf tees you pull from a bag. 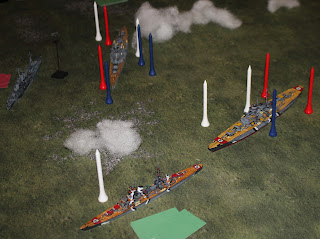 Blues are misses, reds are hits and whites could be either depending on the circumstances. 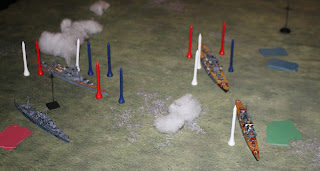 The number of hits enable you to draw cards from your opponents hand. These are temporary out of action and are placed behind your ship so you can't use them until they are resolved and become permanent or are repaired. You have a Damage Control and Drill team in your hand, and you can swap these out for things you'd rather not be hit. Like your guns. If your ship has good armour then you have several armour cards in your hand so reducing the chances of your vital bits being hit. 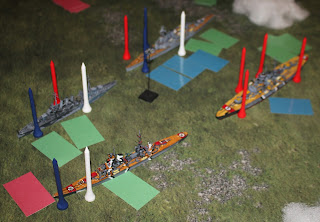 I was taking a bit of a pasting, but I did manage to inflict some permanent damage on Richard. I thought I was for it, and then....

...a couple of lucky hits and I took out the Main Magazine and the Damage Control team on the Devonshire (red cards) and also the Main Magazine on the Hood (white cards). I had previously permanently knocked out the Hood's Damage Control capability (I didn't know this), and so was able to sail out into the Atlantic, with the Royal Navy lighting up the sky behind me.

It's a quick, neat system that gets away from the traditional hull hit point system and focuses on which bits of the ship have been hit.