All My Basques in One Entrance

With their paint barely dry my Basque battalions were out on the table top for some more play testing.

This game was set up as an encounter battle with both sides rushing to seize three river crossings. This was inspired by the recent partial re-painting of a bridge gifted to me by WD chum Tim Gow. I was joined for the evening by Chris A, who took control of the Fascists.

BTW The dry stone walls represent sunken roads/lanes which were a feature of Spanish agricultural areas at the time of the War. 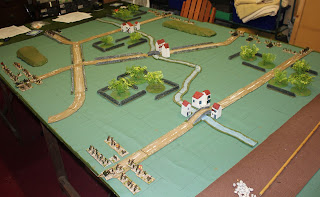 The Fascist Nationalists (FNs) are on the left. They've got a couple of Divisions mostly of Regular Army, but also including Civil Guards and Falange. some cavalry and an armoured car. The Basque Nationalists (BNs) have one Division of Euzoka Gudarostea ("Basque National Army"), a Socialist militia Division, and some tanks. Both sides have got field guns and the FNs have got a 37mm  anti-tank gun. I'd also written some quick air attack rules before Chris arrived, as I'd come to a bit in my book that talks about fighter ground attacks during battles, so I had a better idea of what I wanted to see. 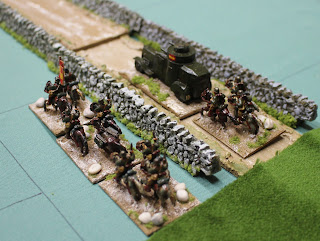 As I said, a unit of cavalry and a QRF Lancia armoured car, I think. 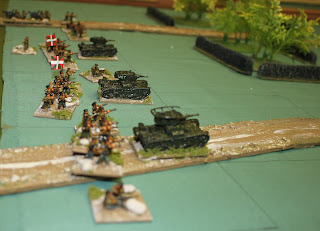 My brave Basques set up with their armour. Gonna capture those bridges and kick some ass. 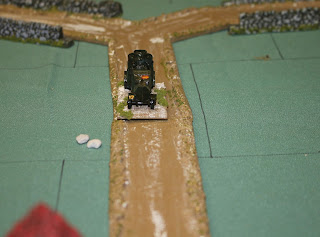 Unlike previous games the unit activation system really kicked in during this game. We had a lot of fails and the turn passing between players. We also had a couple of instances of activation failures meaning some units didn't get to move at all in a turn. Looked quite realistic, and caused me a lot of problems with my infantry/armour co-ordination.

Chris lead with his armoured car, and tried to rush the bridge on my right flank. 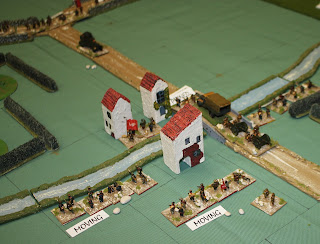 A change of activation meant I got there first with militia and a field gun battery. Chris however then machine gunned my unit in the village and Pinned it in place. 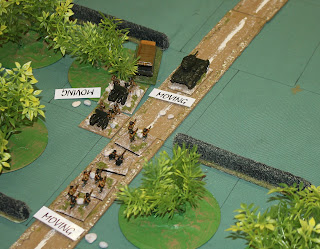 On the other flank I moved up through the olive grove, and put my field guns off the road so they can shell the village on the bridge prior to my assault.They got badly shot up before I could deploy them and played no part in the battle. 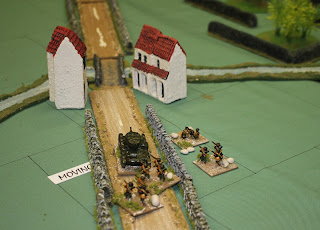 In the middle a lone Basque battalion, together with a squadron of tanks is heading for the central bridge. 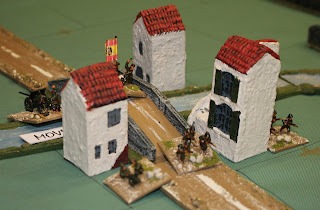 On my left Chris has already got some Regular Army into the village, and is hauling up his anti-tank gun. 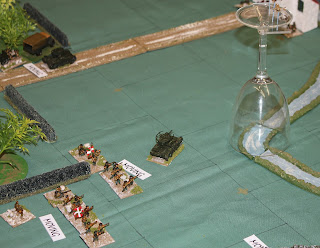 Then some Nationalist fighters turn up. They weave across the table, before lining up a strafing run. 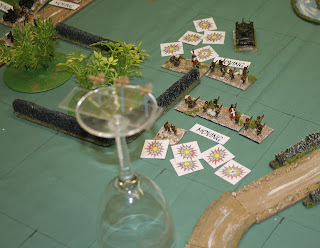 Two of my units take a fair number if hit markers. The mechanism wasn't perfect and I made some of it up as I went along, but I reckon I have it sorted now as a semi-random event. 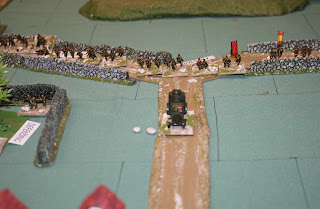 Chris was unable to press forward on my right with his armoured car, so he brought up a lot of infantry, which cowered in the sunken road. 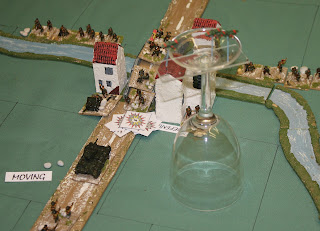 Then my air support turned up and shot up the village on my left, ahead of my tank-backed close assault. It was all looking good. 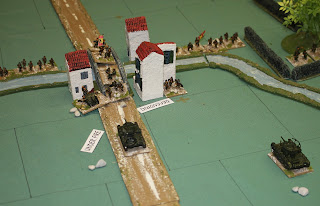 And then I lost the activation just as my infantry were going to storm past the tank and into the village. They were stuck exposed in the open, not fully covered by the armour (the tank on the right needs to be a square further forward) and got right royally shot up by the unit to the right of the village as you look at the picture. They were sent backwards in Disorder. 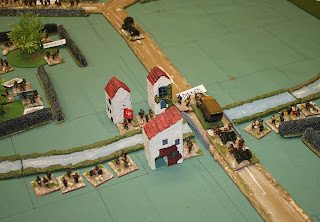 On the right I'd missed an activation or two at the end of the previous turn and hadn't been able to deploy my field guns. My infantry were exchanging fire with the Civil Guards creeping through the olive groves. 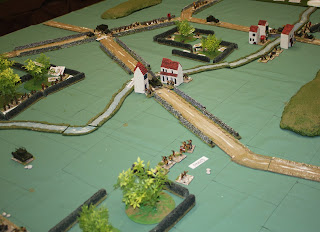 I suffered a number of reverses elsewhere, and we ended the game with me holding two villages, but generally my army was in fairly poor shape, having lost a couple of battalions.

This was a really satisfactory game. It looked and felt like a SCW battle, and it ebbed and flowed well with a good level of irritation without it getting silly. And the air rules looked promising.