Whilst waiting for my latest figure order to arrive I poked around in some unpainted figure boxes and found a load of Carlists I had over-ordered a few years ago.

I've known for a while that there's a gap in my collection in respect of the Northern campaign. Whenever I've done games based in that area I've had to use my Ejercito Populare figures to stand in for Basque National Army (the "Euzko Gudarostea"), and that really isn't right. Basque forces looked different and they really deserve better in any event. I've always had a soft spot for the Basques since we had a totally brilliant French language exchange teacher in secondary school who used a book on Basque history and traditions to teach us. Learnt more French in a term with him that I ever did from "Pluto" Thompson in three years. He was even better than "Willie" Baxter, who was otherwise ace, and introduced me to the works of Andre Malraux.

The Basques were notable beret wearers, as were the Carlists. Okay, so the Carlist beret is bigger and floppier, but the Peter Pig figure is a nice one, and it's clearly wearing a beret and the tassel is easy to shave off. The figures also have puttees, which wasn't really a Basque thing, but I use so much paint it'll be hard to tell.

Actually info on Basque uniforms & dress has been a bit sparse so I'm prepared to accept I'm off target with both colours and clothing. Or maybe not.

Anyhow, I cleaned the figures up, swapped out a few heads, and glued them up for painting.

What a joy. I've been doing 28mm figures the past few weeks, - Crusaders, Turks and the Four Musketeers - and they're such a pain with their fiddly detail and weapons you have to glue in and the sheer unnecessary detail on them. And they don't really work with Trebian the stick method so each one has to be handled individually. Not so with Mr Goddard's finest. Good, clear, detail and poses and you can glue 20 of them on a stick to do at once. I've heard this nonsense about having to paint bigger figures as your eyesight gets worse. The detail you have to paint on 28mm is smaller and there's more of it than on a 15mm figure. If you can't see what you're painting, get your eyes checked and have a pair of glasses in your reading prescription done with a shorter focal length. I did, and I can see 15mm & 6mm figures fine and my eyesight is so bad I get free eye tests.

The pictures aren't the best as I couldn't get the lighting right on my painting desk. 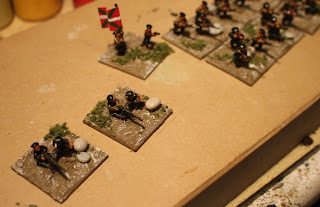 Couple of HMGs with beret head swaps, and a command stand in the background with some rifle groups. I do 9 bases in a unit as that's what "Send Not To Know" uses, so they split down to two "If You Tolerate This" battalions. 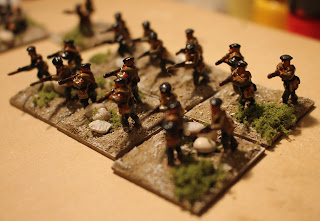 Oooh. That is a bit dark. The jackets are either deep blue or khaki. The trouser colour is a light blue to approximate the blue "ticking" that they wore. 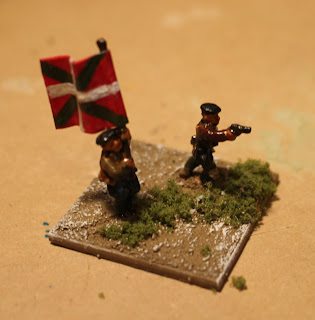 The Basque flag ("ikurrina") has come up quite well, I think. The standard bearer is the Carlist crucifix carrier. My, that was a pain carving Our Lord and Saviour off his perch. The officer is in a leather jerkin.

There's another unit currently on the drying stand whilst the glue and varnish set. Then all I have to do is finish off the bases and then I can crack on with my just-arrived Italian CTV forces.