More from the Spanish Civil War

I was able to squeeze a game in Friday afternoon as my car was stranded at the local garage having an MOT (2 rear shocks & a front spring replacement, thank you for asking. Good job I put that figure order in last week or I'd have decided I couldn't afford it). 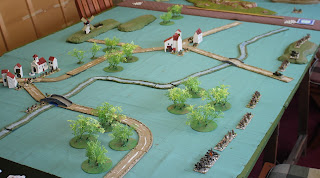 So, after some revisions following last week's game, - I've introduced the concept of a unit being "Under Fire", and also done something to keep track of who artillery is firing at to enable me to enforce the changing target rules - I set up a scenario with another Nationalist attack. For this game Phil got a load of Carlists in their fetching red berets, and I got a lot of scruffy militias and some Asaltos. I also chucked in some cavalry as I don't have very good rules for them and a tank. 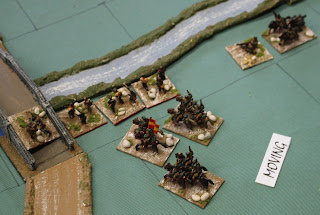 Phil's always good value with modern cavalry and eschewing the dismounting business and trying to be mobile infantry he threw in a wide arcing manoeuvre and charged my bridge guarding militia in the rear, having deployed his HMG first as support. 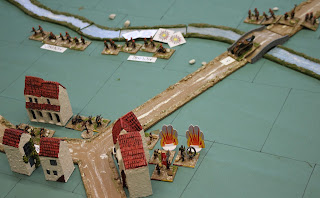 On the other flank my lead units defending the village came under fire from both artillery and the tank gun (see the new blast markers looking pretty snazzy). 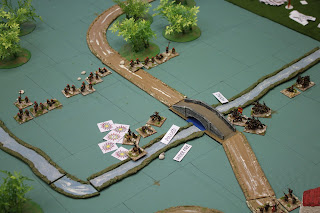 Having been chased out of their position by the cavalry the militia got badly shot up by the advancing Carlists. 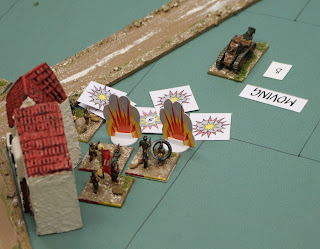 Phil closed on the village with his armour. The "B" marker has a corresponding blast marker so you know who is firing where. 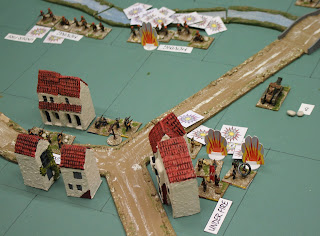 The wider shot shows why the supporting Nationalist infantry has been held up. Heavy fire from the defenders and my guns (not shown) have plastered them as they wade across the stream. 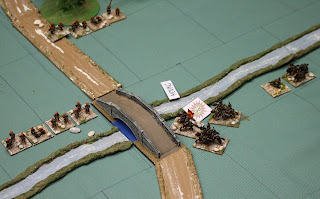 On the other flank my militia are overrun by the Carlist infantry, but I've got the range of that cavalry. Reminder to self, - the water under the bridge needs a repaint so it matches my rivers. 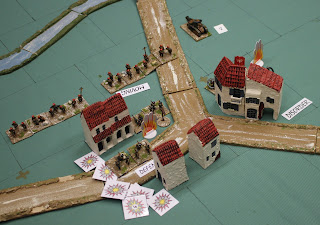 The Carlsits press in on the village, but the armour hasn't been able to co-ordinate. It looks bad for me, but next turn having resolved the hits on the Aslatos I am able to inflict a lot of damage on the Carlists. 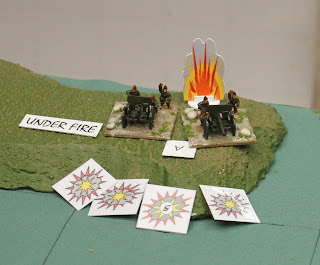 I'm also able to observe Phil's guns and put them under fire.

The photo record is incomplete but I was able to prevail this time, and drove the Carlists off with heavy casualties. Alas I realised I was counting the morale levels incorrectly, and I declared a couple of Phil's units broken one step to early. Oh well. Maybe I'll get the rules right next time.

Not withstanding all of that the game is playing much quicker - partly due to increased familiarisation - but also because I'm getting the player aids and the rules sorted, pruning out unnecessary detail.