I'm still looking around for the perfect set of medieval rules to use with my 11th/12th century plastic Reconquista figures, so I decided to have a go with Basic Impetus to give me a break from the SCW.

As of last year BI is no longer free, and a new "2.0" version is available. At $4.99 for the download, including 340 army lists I thought it was worth the investment. Phil used the earlier version to do Monteperti at the SoA Battle Day in 2014, and I wasn't convinced one way or the other, although I remember they had quite a cool impetus mechanism for charging units. 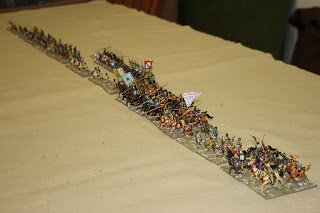 There are quite a few Reconquista army lists. This is the later period Anadalusian army. I quite like the classification of the Muslim heavy horse as Medium Cavalry as they look a lot like Christian Knights, but have a slightly weaker impetus bonus. 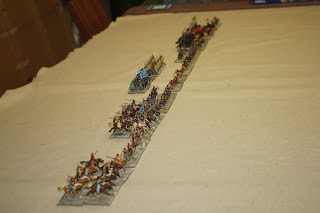 This is from the El Cid army list. I've had to improvise a bit as BI uses quite big units, - the foot print is very AMW - and has some slightly different classifications of troop types, most of which I quite like. Not everything is exactly what it seems, however. 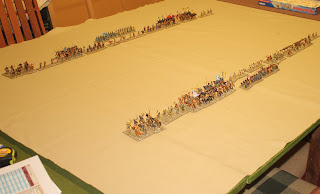 I set up on a open plain as that's often the best way of learning the basic rules.Phil took the Andalusians, and I got the Cid. 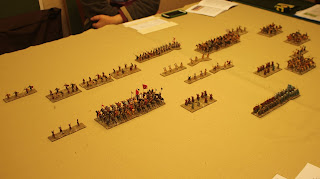 I aimed to smash through the javelin armed light foot with my knights and once I had broken through wheel round to roll up the rest of the army. 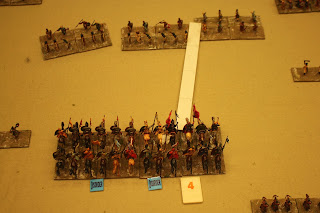 This proved to be less than optimal as a tactic. Phil's archers and some out of shot slingers forced cohesion tests on both my units, and the Cid's men even took a hit. That's a Rummikub tile recording their current "VBU" or unit combat value (the abbreviations are still taken form the Italian original for the English translation). Don't know why this picture is so yellow. 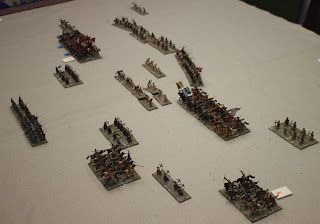 On the other wing Phil has duffed up my light horse, although at some cost. The system gives units that are classified as FRESH a lot of hitting power, but this degrades quickly once they've been in combat so you have to make the best of them as soon as you can. WORN units can be taken apart quickly if they end up clashing with FRESH units. 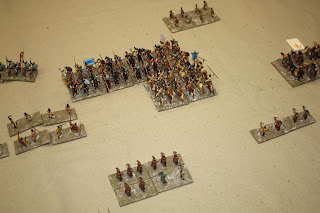 I avoided the mistake I made on the left flank and my Caballeros Villanos were more sheltered until I could launch them into the front of Phil's Andalusian medium cavalry. I'd also succeeded in Disordering one of the units with my crossbows - that's the blue marker - , but I was luckily able to avoid fighting them, so it wasn't important immediately. 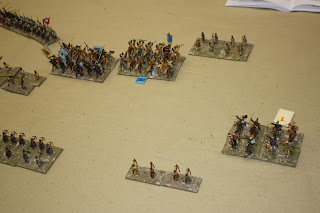 The Caballeros crashed through their opponents, driving them back and routing them in short order. Phil's face fell. 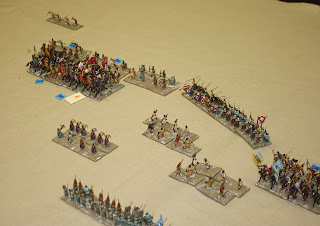 On the other flank my knights had got completely bogged down in a protracted melee with the light infantry, having lost their impetus before the melee started. 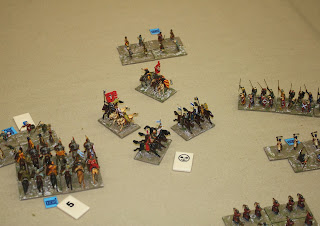 The Cid finally broke the unit in front of him, only to be broken by the massed archers (that's the block with 8 figures. A bit misleading, I know), who had originally been driven back. 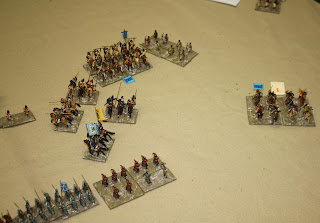 The game tipped my way on the other flank as my crossbow men were able to break the other Andlausian cavalry unit, through a mixture of defensive fire and good melee scores. The loss of impetus was a killer again.

Conclusions? Well, it played quickly and we soon had most of the rules sorted. I liked a lot of it, but then that can be the case with the first few games when you are using historical tactics and just letting the rules carry out the resolution, rather than using rule based tactics. Phil reminded me of one of the things we didn't like in the earlier system, which was the ability to interpenetrate missile troops repeatedly to open up withering fire on any opponent opposite. I think we can sort that.

Otherwise they've fixed a few minor niggles with the earlier version, and given us an evade rule.

So I think that I will persist with them. The army list system is sufficiently transparent to work out the forces and classifications I want, and the rules are generally free of any silliness. There are some parts that enable successes (or failures) to snowball and produce catastrophic outcomes and that is all to the good, I think.

A satisfactory evening.
Posted by Trebian at 16:17