After the last slightly depressing travelogue from our recent travels, here's something a bit more wargamer-ly. 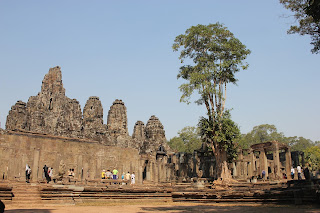 Everyone knows about Angkor Wat, although, as is often the case, what you think you know is probably wrong. Angkor Wat is the Temple at Angkor. Angkor means "City", or can be read as "Capital City", so Angkor Wat is the "Temple of the City". The biggest collection of buildings is in an area called Angkor Thom, or "Great City". Anyway, what this means is that there's lots of buildings in the area dating from the 9th - 12th century at the height of the Khmer Empire, ruled over by a series of many multi-syllabic monikered monarchs.

Within Angkor Thom is a temple/building called the Bayon, built by King Jayavarman VII, who was one of the Great Kings of the Khmer Empire at the end of the 12th century. From a distance the Bayon is striking for its four faced towers, looking in all directions. You can just make them out in picture above. They are massive pieces of both engineering and art. 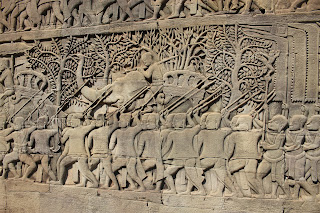 The real surprise for those unfamiliar with the period and place is the massive amount of detailed wall carvings that decorate the lower walls of the temple. Pretty much everything we know about the Khmer Empire's army (and, actually, daily life) comes from these carvings, plus those in Angkor Wat and some in a temple in the jungle up in the North West.

Here we can see an elephant full of supplies, accompanied by infantry, probably in armour. On the right you can see a group of standard bearers, lead by a chap holding a pole with an Apsara on the top. An Apsara is a female wind or sky spirit, usually depicted as a semi naked young woman with very flexible legs. They are a very common motif in both Hindu and Buddhist buildings. 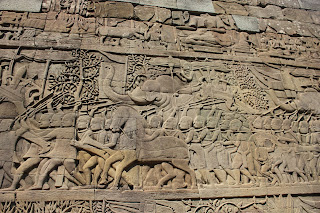 Here you can see some infantry with the curious long shields, which we don't really seem to understand. The problem is that there seem to be no artefacts apart from what is on the walls. No spear points, no armour, no shields, no nothing*.

You can see people with parasols here, and someone leading a horse. Horses are problematic as it isn't clear from the carvings if they are units of cavalrymen, or just mounted officers or messengers. As the Khmer don't seem to breed horses it looks like they had to import them all from either India or China. 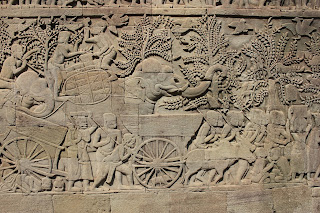 The carvings also show the army's commissariat, so we have supply wagons and elephants, male and female porters, people pushing carts, or chasing chickens. It's all very lively. 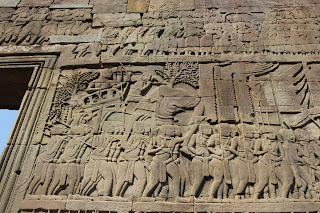 We've got more infantry here, although these look to be skirmishers or light infantry associated with the elephants. They have no armour (just curious rope like cross belts) and seem to have javelins. The chappy in the elephant has a big bow. 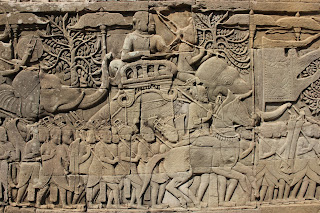 Another elephant with archer here, but there are some other interesting items to consider. The mahout on the elephant top left has a small round shield on this arm something most of them don't have. And take a close look at the infantry and cavalry figures. You can see from their facial features (including their ears) and their headdresses that they're a different racial group to the bloke on the elephant and the soldiers we've seen elsewhere. These look Chinese, so may represent mercenaries or allies as even at its greatest extent the Khmer Empire wasn't in a position to take on the Chinese. 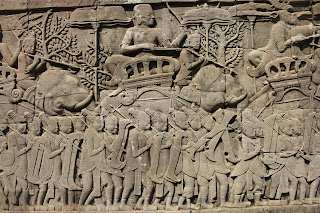 This picture isn't really doing what I wanted, but it'll have to do. The elephant crew top right are operating a large ballista like weapon, mounted on the back of the elephant itself. Now, who wouldn't want an army with one of those in it? At least one. Mr Kay at Irregular may be getting some of my money soon. 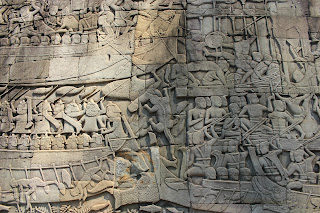 Elsewhere there are some carvings of naval battles against the Cham, who were the dominant race in Vietnam at the time. These battles probably took place off the coast, but could have been in Tongle Sap, the big freshwater lake near Angkor.

The Cham have either a type of helmet or long hair. You'll note that there's a row of oarsmen rowing in classic galley style at the bottom of the boat. People are fighting boat to boat, and one poor fellow who has fallen in the water is being eaten by a crocodile. 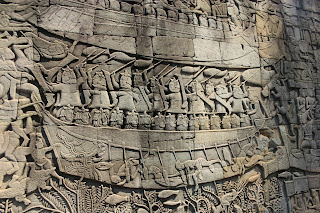 This is the Cham boat again, but a full shot. You can see the Khmer marines boarding the prow. I like the dragon head carved on the front of the boat. It's difficult to guess how big the boats were, but the crew seem packed in tight.

You will note that there are no chariots in any of these carvings. That's probably because this depicts the actual army, whereas elsewhere chariots appear in scenes from Hindu mythology where the chariot is the principal force of any army.

This was a wonderful visit. The carvings are still vibrant and full of life, quite unlike anything you would see in the west of a similar period. Absolutely delightful.

* I attended a talk recently given by Thom Richardson, formerly of the Royal Armouries. You'd be amazed at how little has survived from the same period in Europe. We thinks there's loads of stuff, but really we only have a few bits here and there, and very few complete sets of armour as they were made.
Posted by Trebian at 13:25