What did I forget now?

The thing with writing your own rules is that you really have no excuse for not knowing what they are or knowing what is intended. Well, not really. I quite often forget what I was thinking when I made design decisions. Plus, as I'm developing them I can forget where I've got to and revert back in my head to an earlier version.

For this week's entertainment I also had the challenge of not playing a game with these rules for about a month due to holidays and other commitments. Any how, notwithstanding these challenges we were back in Spain for some more Civil War action 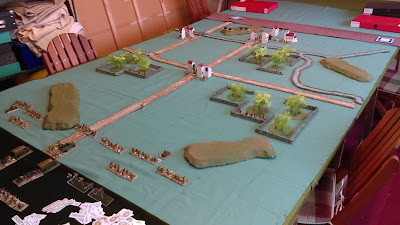 What I was able to do for this game was debut some new forces, - namely some Italians (well, lots of Italians) and also some new AA units in the guise of truck mounted HMGs.

Also, for this game I decided to play along the table rather than across it. I did this for two reasons. Firstly I wanted to try a multiple lines of defence game. Secondly I wanted to try my off-set squares grid going along the opposite grain, which makes it perform much more like a conventional hex grid board. 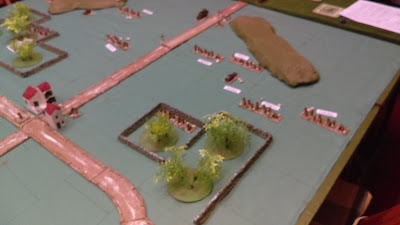 Phil got the Italians and started off in a bullish fashion, advancing across the open ground (BTW these pictures are taken with my phone, so apologies for poor quality & a bit of shakiness). At this stage I was having problems ranging my guns on the targets. And I forgot to put out the Under Fire markers, which were a significant change to the rules one or two iterations back. 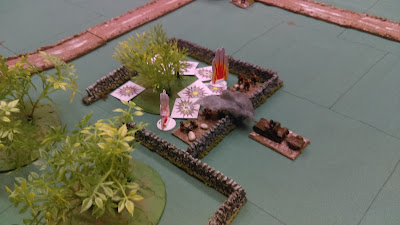 Phil, on the other hand, had got his guns deployed and registered on the first defensive point. To make things worse he also got one of his tankette squadrons in close. The one with the flamethrower. This is a new toy, so not too unhappy to see it deployed. 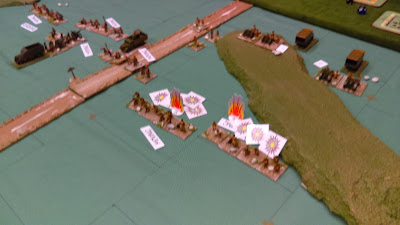 At last my guns got registered on those chaps in the open, and I started to give them a pounding. 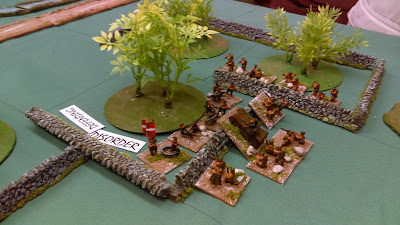 Too late for my brave fellows in the olive grove over on the left flank, who were outflanked and subject to a tank assisted close assault. This lead to a hurried retirement on my part. 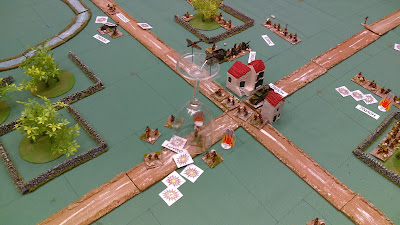 Then Phil got an airstrike, and started to plaster any of my units on the main road. Some work still to be done here on the rules as I couldn't work out what I'd written down about target observation. I do know you get a modifier if you have air identification markings on your vehicles. 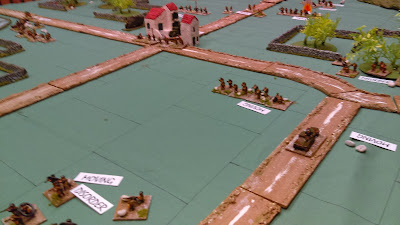 Despite my best efforts Phil was able to forge forwards. A combination of massive amounts of small arms fire, tanks and artillery with a little bit of bombing is a winning combination. I did rough up some of his units quite badly (and damaged a CV35 with an HMG), but I let my units get isolated and overrun piecemeal. Alas my attempt to close assault an armoured unit did not succeed. 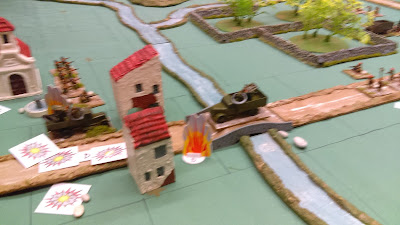 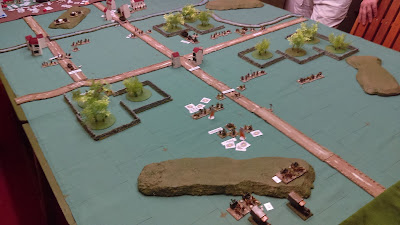 This is a picture of the final position. Note the howitzers firing from a defiladed position. I think the Italians are a bit strung out, and if I had any forces for a counter attack I'd be well in there.

Another satisfactory run through, with a few notes taken for future modifications. And a successful first outing for the CTV. Jolly good all round, really.
Posted by Trebian at 14:42