An Italian break in the Iberian Peninsula.

After a few weeks break I required retraining as we went back to the Spanish Civil War to give my Italians an outing. Writing your own rules sounds fine, but I can never remember what I've changed week on week.

Phil & Will split an Italian Infantry Division between them, plus a tank group of CV35s. With all the attendant artillery they come very well tooled up. Being a softy I classified them as "Competent", rather than "Bad" or "Awful". (The other classifications are "Elite" and "Determined", - see A-E in quality steps from the worst to the best. Clever, eh?)

I had some Basques and their Socialist allies, and a couple of Renault tanks squadrons someone found at the back of a warehouse and some Ejercito Populare battalions as support. No aircraft for anyone as the spotting rules for them are going really badly. 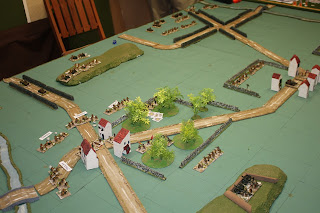 We set up across the table, so we were fairly close to each other. Will started with a full assault on my unit holding the village on the left. His artillery was able to plaster my position fairly comprehensively (note that he has a howitzer battery on the reverse slope with a crest-line spotter too).

Being a rag tag bundle of Republicans things started to unravel early on as I was unable to pass command effectively between units. The Italians, being all within the same command structure, moved like a well oiled machine and I was unable to activate all of my units before the end of the turn on more than one occasion. 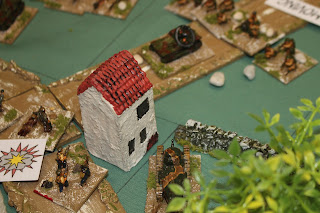 Hordes of Italians and their pesky tankettes closed on the village. I brought up one of my Renaults, and managed to hit the tankettes (you can see a black damage marker on the roof of it if you look carefully). 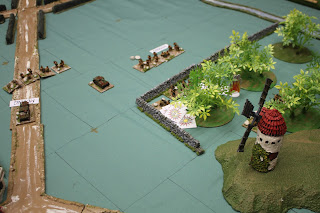 Meanwhile on the other flank Phil was being more cautious, making full use of the sunken roads, before bursting out across the open ground. 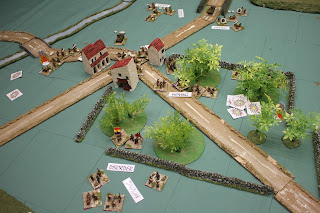 Will was able to close assault the village, and evicted my defenders, who can see are "Moving" and "Disordered" at the bottom of the picture. I had my Renault and a Popular Army battalion poised to counterattack, 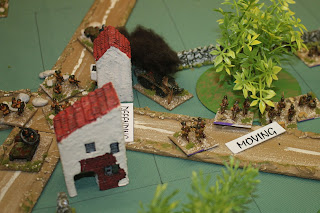 Will tried to halt me by hosing my tank with a flamethrower CV35. Luckily this was ineffective. 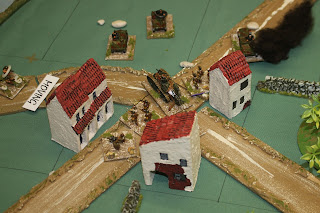 I was then able to storm into the village, throwing out the Fascists. By this point a lot of Will's units had been badly shot up as I did manage to activate units and shoot him up at close range. 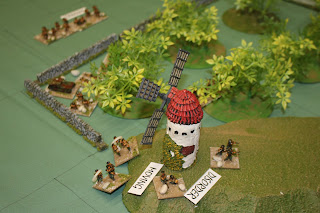 On the other flank Phil close assaulted the Olive Grove with his armour support. My chaps are running away again. 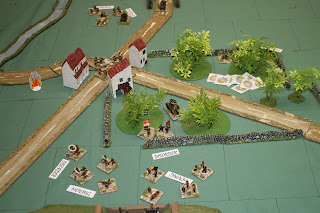 Unfortunately for me on the other side I was unable to set up proper defences in the village, and Will counter attacked with another battalion with armour support, and I soon had another unit going backwards in Disorder. 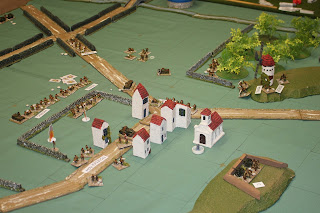 In the other village my fellows defending the grave yard had been under the artillery pump for a while and I'd been unable to activate them. When I was finally able to do so one of them emerged from the dust and smoke fairly unscathed and poured massed fire into the unit opposite them. The other defending unit was less lucky and was soon heading for the rear table edge. Phil meantime had also got a unit on the flank of my position, you can see them on the "Y" junction. 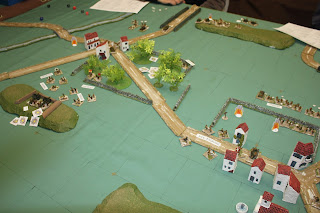 And I again lost the initiative and couldn't get everything moving, so more concentrated fire from the Fascists and it was all over for my brave chaps.

So, where are we then? The fire mechanism is ticking over nicely. It pins people in position and if you're foolish enough to get caught in the open at close range it is very nasty. The close assault rules are doing good service in the built up areas as they swung backwards and forwards in terms of control.

What did for me in this game was having a polyglot force fighting one with a consolidated command structure. Orders passed from Basque to Socialists to Popular Army were delayed repeatedly, plans were disrupted and units often didn't get any orders at all.

Yes. Looking very good all round.
Posted by Trebian at 16:19